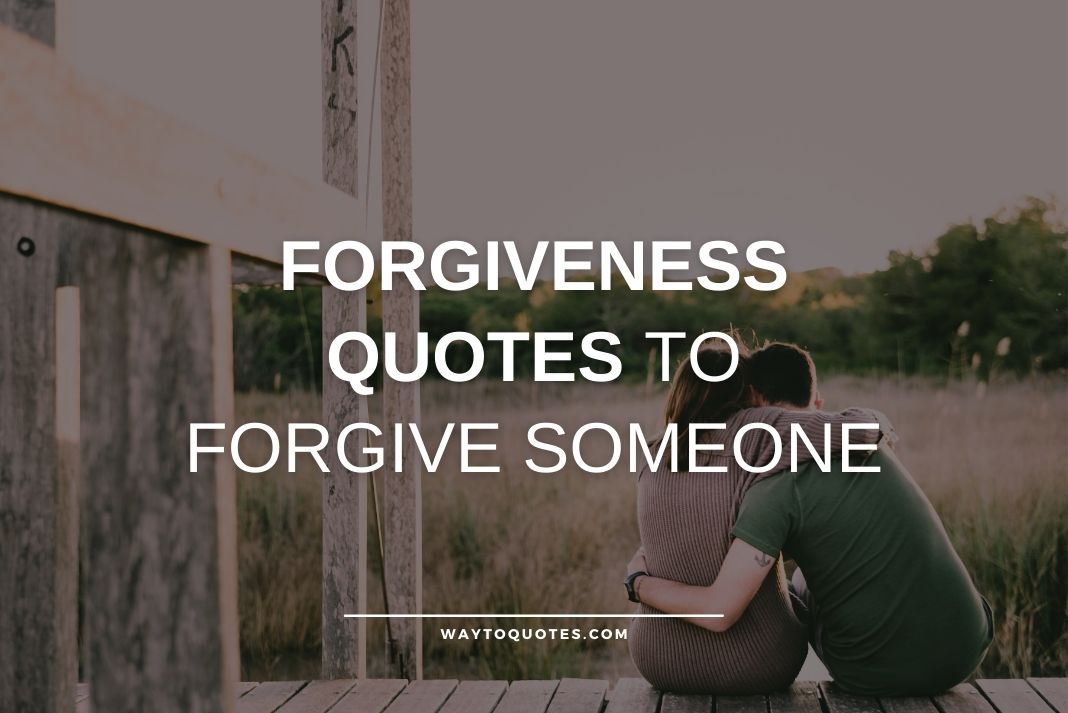 Revenge is hard, forgiving is harder. We all live in a world of imperfections and uncertainty. We are all humans and are vulnerable when it comes to making mistakes. Sometimes we do not even mean to do something the wrong way, but it anyways happens. Similarly, sometimes the people around us make mistakes, our friends and family. What do we do in such a situation? The immediate answer is to forgive them. But the grudge sometimes would not let us. So today we have brought the best collection of powerful Forgiveness Quotes that will help you put the grudge aside and bring back love in the equation.

Why is forgiveness important?

It might seem that forgiving someone is important to keep the relationship going happily. But deep down, when you forgive someone from your heart; it is good for you more than anyone else in the whole world, because it gives you a sense of freedom from the negativity and grudges.

So welcome the positivity in your life by forgiving people, because life is short. So here are the best Forgiveness Quotes for you:

1. “Forgiveness does not change the past, but it does enlarge the future.” – Paul Boose

2. “When you hold resentment toward another, you are bound to that person or condition by an emotional link that is stronger than steel. Forgiveness is the only way to dissolve that link and get free.” – Catherine Ponder

4. “Most of us can forgive and forget; we just don’t want the other person to forget that we forgave.” – Ivern Ball

5. “To forgive is the highest, most beautiful form of love. In return, you will receive untold peace and happiness.” – Robert Muller

6. “Not forgiving is like drinking rat poison and then waiting for the rat to die.” – Anne Lamott

7. “The act of forgiveness takes place in our own mind. It really has nothing to do with the other person.” – Louise Hay

8. “Always forgive your enemies – nothing annoys them so much.” – Oscar Wilde

9. “Before we can forgive one another, we have to understand one another.” – Emma Goldman

10. “Let us forgive each other – only then will we live in peace.” – Leo Nikolaevich Tolstoy

11. “True forgiveness is when you can say, “Thank you for that experience.” – Oprah Winfrey

12. “Once a woman has forgiven her man, she must not reheat his sins for breakfast.” – Marlene Dietrich

13. “Forgiveness is a sign that the person who has wronged you means more to you than the wrong they have dealt.” – Ben Greenhalgh

14. “Forgiveness is a funny thing. It warms the heart and cools the sting.” – William Arthur Ward

15. “Forgiveness is not an occasional act, it is a constant attitude.” – Martin Luther King Jr.

16. “As I walked out the door toward the gate that would lead to my freedom, I knew if I didn’t leave my bitterness and hatred behind, I’d still be in prison.” – Nelson Mandela

17. “Throughout life people will make you mad, disrespect you and treat you bad. Let God deal with the things they do, cause hate in your heart will consume you too.” – Will Smith

18. “The stupid neither forgive nor forget; the naive forgive and forget; the wise forgive but do not forget.” – Thomas Szasz

19. “Forgiveness isn’t approving what happened. It’s choosing to rise above it.” – Robin Sharma

Quotes on the Power of Forgiveness

21. “The weak can never forgive. Forgiveness is the attribute of the strong.” – Mahatma Gandhi

22. “Resentment is like drinking poison and then hoping it will kill your enemies.” – Nelson Mandela

23. “Forgiveness is the key to action and freedom.” – Hannah Arendt

24. “Forgiveness is the fragrance that the violet sheds on the heel that has crushed it.” – Mark Twain

26. “The practice of forgiveness is our most important contribution to the healing of the world.” – Marianne Williamson

27. “When you forgive, you in no way change the past—but you sure do change the future.” – Bernard Meltzer

29. “A broken friendship that is mended through forgiveness can be even stronger than it once was.” – Stephen Richards

30. “Anger makes you smaller, while forgiveness forces you to grow beyond what you were.” – Cherie Carter-Scott

31. “To forgive is to set a prisoner free and discover that the prisoner was you.” – Louis B. Smedes

33. “Without forgiveness life is governed by an endless cycle of resentment and retaliation.” – Roberto Assagioli

34. “Be the one who nurtures and builds. Be the one who has an understanding and a forgiving heart one who looks for the best in people. Leave people better than you found them.” – Marvin J. Ashton

36. “True forgiveness is not an action after the fact, it is an attitude with which you enter each moment.” – David Ridge

37. “You’ll never know how strong your heart is until you learn to forgive who broke it.”

40. “Forgiveness is a gift you give yourself.” – Tony Robbins

41. “Forgiveness is like faith. You have to keep reviving it.” – Mason Cooley

Forgiveness Quotes To Help You to Let Go

42. “Laughter gives us distance. It allows us to step back from an event, deal with it, and then move on.” – Bob Newhart

43. “Forgiveness is the giving, and so the receiving, of life.” – George MacDonald

44. “Don’t dwell on what went wrong. Instead, focus on what to do next. Spend your energy moving forward together towards an answer.” – Denis Waitley

45. “Everyone says forgiveness is a lovely idea, until they have something to forgive.” – C.S. Lewis

46. “Hating someone makes them important. Forgiving them makes them obsolete.”

47. “Certainly people make mistakes in their life. I’m no different, I’ve made mistakes. When people mess up, forgive them. When I mess up, I ask for forgiveness.” – Michele Bachmann

48. “Getting over a painful experience is much like crossing monkey bars. You have to let go at some point in order to move forward.” – C.S. Lewis

49. “Forgive others not because they deserve forgiveness, but because you deserve peace.” – Jonathan Huie

50. “You can clutch the past so tightly to your chest that it leaves your arms too full to embrace the present.” – Jan Glidewell

51. “Forgive others as quickly as you expect God to forgive you.”

52. “It is easier to forgive an enemy than a friend.” – William Blake

53. “If you cannot forgive and forget, pick one.” – Robert Brault

54. “Once a woman has forgiven her man, she must not reheat his sins for breakfast.” – Marlene Dietrich

55. “Be the one who nurtures and builds. Be the one who has an understanding and a forgiving heart one who looks for the best in people. Leave people better than you found them.” – Marvin J. Ashton

56. “There is no peace without forgiveness.” – Marianne Williamson

58. “The weak can never forgive. Forgiveness is the attribute of the strong.” – Mahatma Gandhi

60. “I don’t think people understand that you can forgive a person and not allow them back into your life. That is possible, very possible.” – Alex Elle

62. “Forgiveness is a reflection of loving yourself enough to move on.” – Dr. Steve Maraboli

63. “There is nobility in compassion, a beauty in empathy, a grace in forgiveness.” – John Connolly

64. “The man who forgives is far stronger than the man who fights.” – Nathan Craoll

65. “I can have peace of mind only when I forgive rather than judge.” – Gerald Jampolsky

Life is a beautiful but unpredictable journey. You never know what happens on the next turn. So make sure you never let your loved one’s mistake turn into a never-ending grudge into your heart because it won’t only hurt the relationship but also ruin your peace. So take your time and let the anger melt into love.

6 thoughts on “65 Forgiveness Quotes To Forgive Someone”