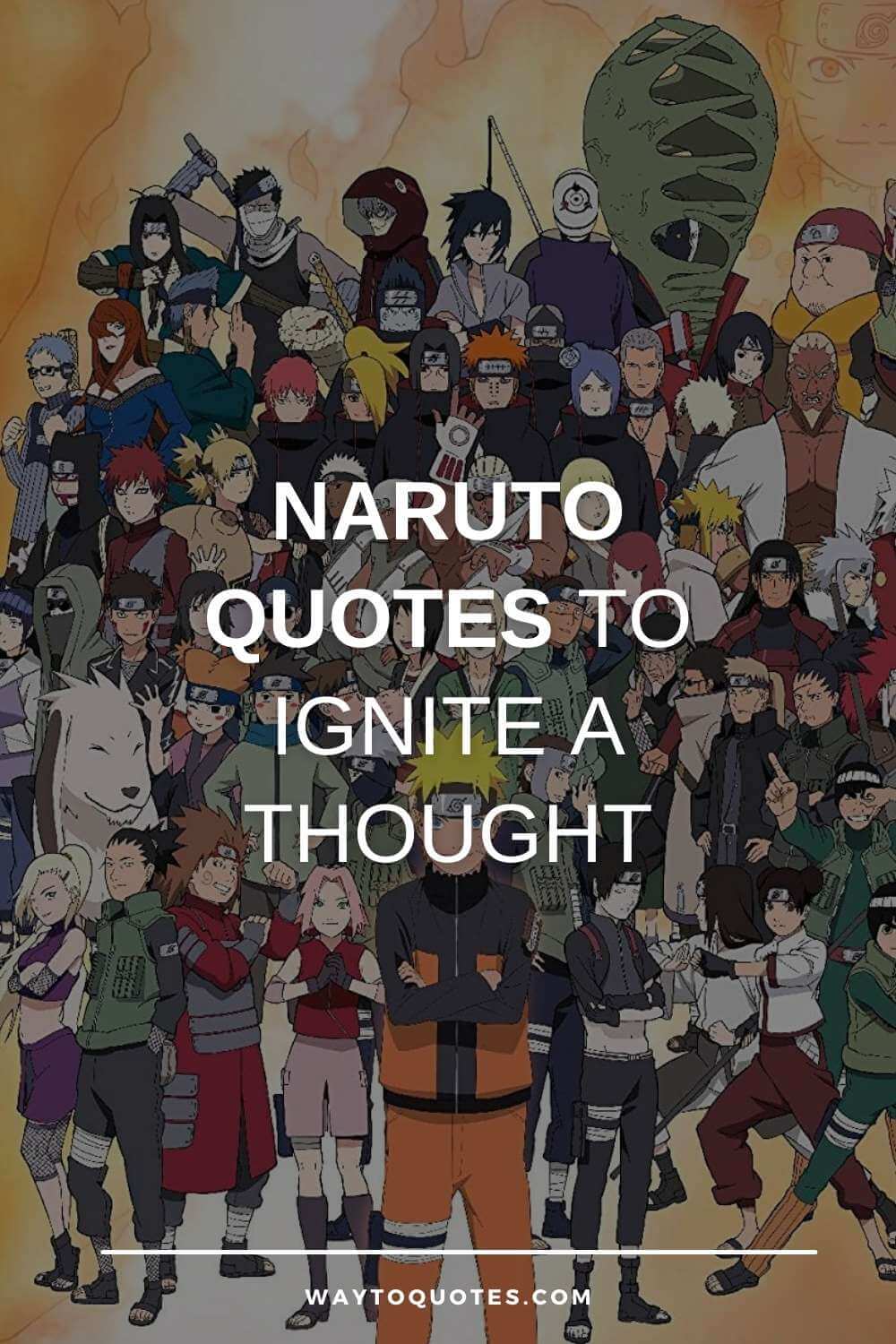 Naruto is an anime that took the love and obsession of animes to another level. Not only kids but even the grownup millennial do not only watch it, but in a way looks at it as a way of life. People actually tend to learn life lessons from the show and we are not surprised because have you watched any of its episodes? So today we have brought some of the best Naruto Quotes, Sayings, and Dialogues from and about the show that will compel you to think and even to change.

As a kid, I was obsessed with watching cartoons, as I am sure everyone is and I also noticed and heard that grownups do not like watching toons. But I still do watch and enjoy animes and even the cartoons I watched as a kid so it might be that millennial is the first generation that is going to take animes to their grave with them. This also might be because we are the first generation to be watching cartoons for whole of our childhood.

Naruto and the other characters from the series actually pulls on human and emotion strings that even some actual human movies fail to do. So take a look at some of those thinking worthy Naruto Quotes and Sayings:

2. “A smile is the easiest way out of a difficult situation.” – Sakura Haruno

3. “If love is just a word, then why does it hurt so much if you realize it isn’t there?” – Gaara

4. “If you don’t like your destiny, don’t accept it. Instead have the courage to change it the way you want it to be.” – Naruto Uzumaki

5. “People become stronger because they have things they cannot forget. That’s what you call growth.” – Tsunade

6. “Perhaps the companionship of an evil person is preferable to loneliness.” – Gaara

7. “People’s lives don’t end when they die. It ends when they lose faith.” – Itachi Uchiha

8. “Failing doesn’t give you a reason to give up, as long as you believe.” – Naruto

9. “The concept of hope is nothing more than giving up. A word that holds no true meaning.” – Madara Uchiha

10. “In society, those who don’t have many abilities, tend to complain more.” – Hatake Kakashi

11. “A smile is the best way to get oneself out of a tight spot, even if it is a fake one. Surprisingly enough, everyone takes it at face value.” – Sai

12. “Even the strongest of opponents always has a weakness.” – Itachi Uchiha

14. “In this world, wherever there is light – there are also shadows. As long as the concept of winners exists, there must also be losers. The selfish desire of wanting to maintain peace causes wars and hatred is born to protect love.” – Madara Uchiha

15. “We have walked through the darkness of this world, that’s why we are able to see even a sliver of light.” – Gaara

17. “The difference between stupidity and genius is that genius has its limits.” – Neji Hyuga

18. “When captured birds grow wiser, they try to open the cage with their beaks. They don’t give up, because they want to fly again.” – Genma Shiranui

19. “A hero is not the one who never falls. He is the one that who gets up, again and again, never losing sight of his dreams.” – Rock Lee

20. “Even innocent foolish children will grow up in the face of pain until their thoughts and beliefs are the same as their doubts.” – Pain

21. “Sometimes you must hurt in order to know, fall in order to grow, lose in order to gain because life’s greatest lessons are learned through pain.” – Pain 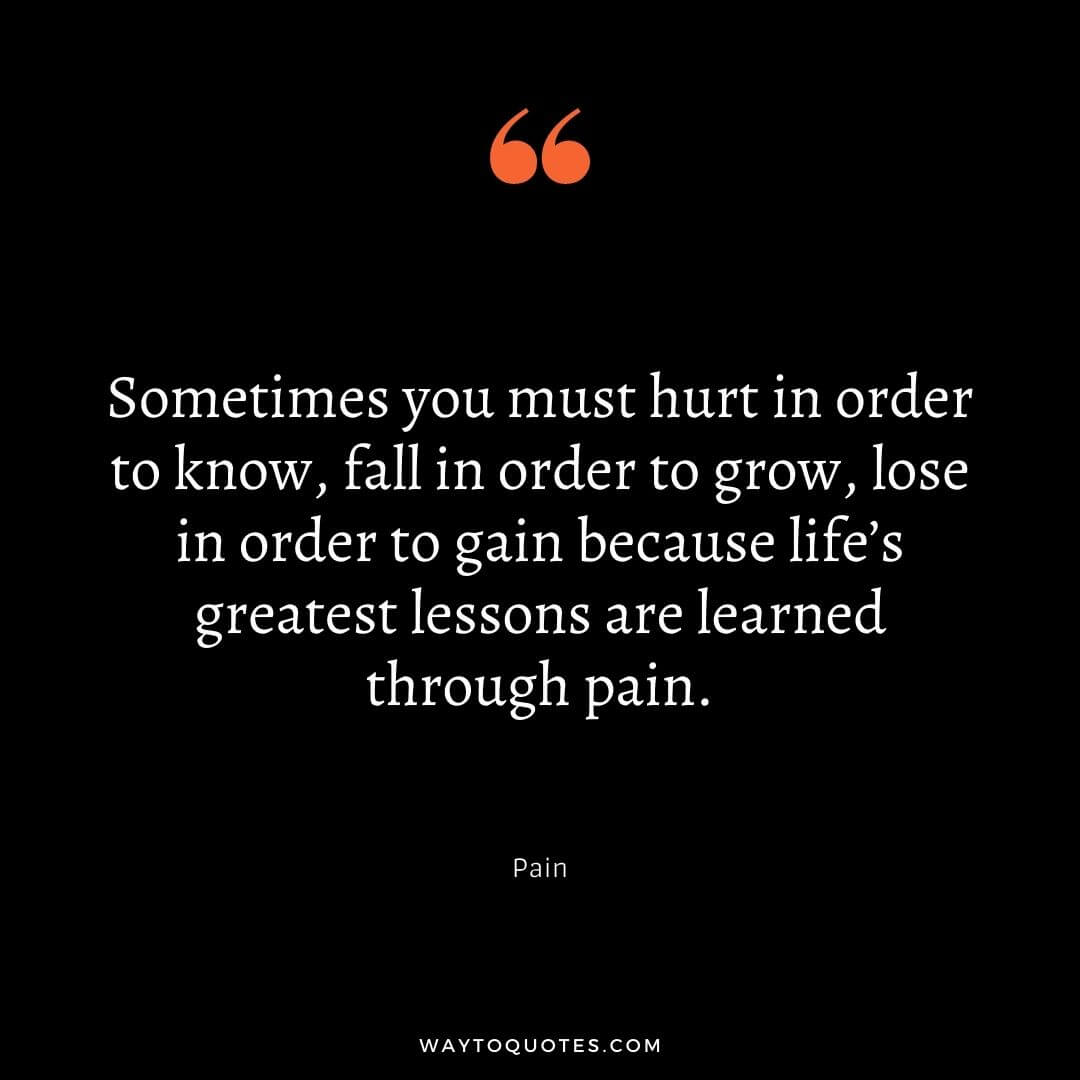 22. “It’s because we help out when they’re in trouble that we can count on them to come running when we need it.” – Nara Shikamaru

23. “The longer you live… The more you realize that reality is just made of pain, suffering, and emptiness.” – Madara Uchiha

24. “Love is not necessary, power is the only true necessity.” – Madara Uchiha 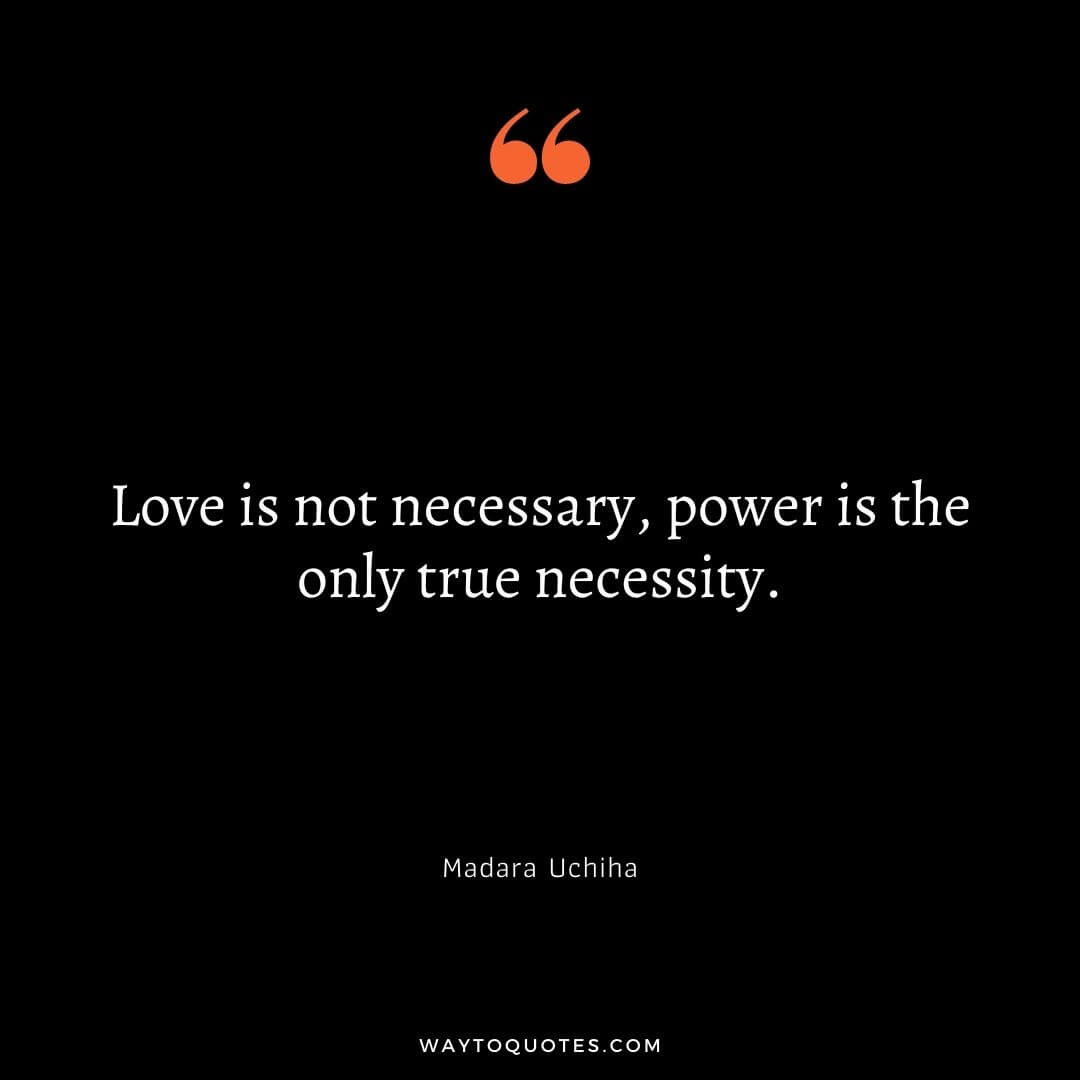 26. “Every one of us must do what’s in their power! If we’re going to die anyway, then it’s better to die fighting than to do nothing!” – Sakura Haruno

27. “When people are protecting something truly precious to them. They truly can become…as strong as they need to be!” – Haku

28. “I love you with all my heart!.. If you were to stay here with me, there would be no regrets…because every day we’d do something fun, we’d be happy I swear..! I would do anything for you! So…please, just stay with me!” – Sakura Haruno

30. “When people are protecting something truly special to them, they truly can become as strong as they can be.” – Naruto

31. “Darkness. When everything that you know and love is taken away from you so harshly. All you can think about is anger, hatred, and even revenge. And no one can save you.” – Orochimaru

33. “Never give up without even trying. Do what you can, no matter how small the effect it may have!” – Onoki

35. “Rejection is a part of any man’s life. If you can’t accept and move past rejection, or at least use it as writing material – you’re not a real man.” – Jiraiya

36. “Growth occurs when one goes beyond one’s limits. Realizing that is also part of training.” – Itachi Uchiha

37. “Knowledge and awareness are vague, and perhaps better-called illusions. Everyone lives within their own subjective interpretation.” – Itachi Uchiha

38. “The things that are most important aren’t written in books. You have to learn them by experiencing them yourself.” – Sakura Haruno

39. “Either people change or they die before they do. It’s one or the other.” – Orochimaru

40. “When you give up, your dreams and everything else they’re gone.” – Naruto

41. “The ones who aren’t able to acknowledge their own selves are bound to fail.” – Itachi Uchiha 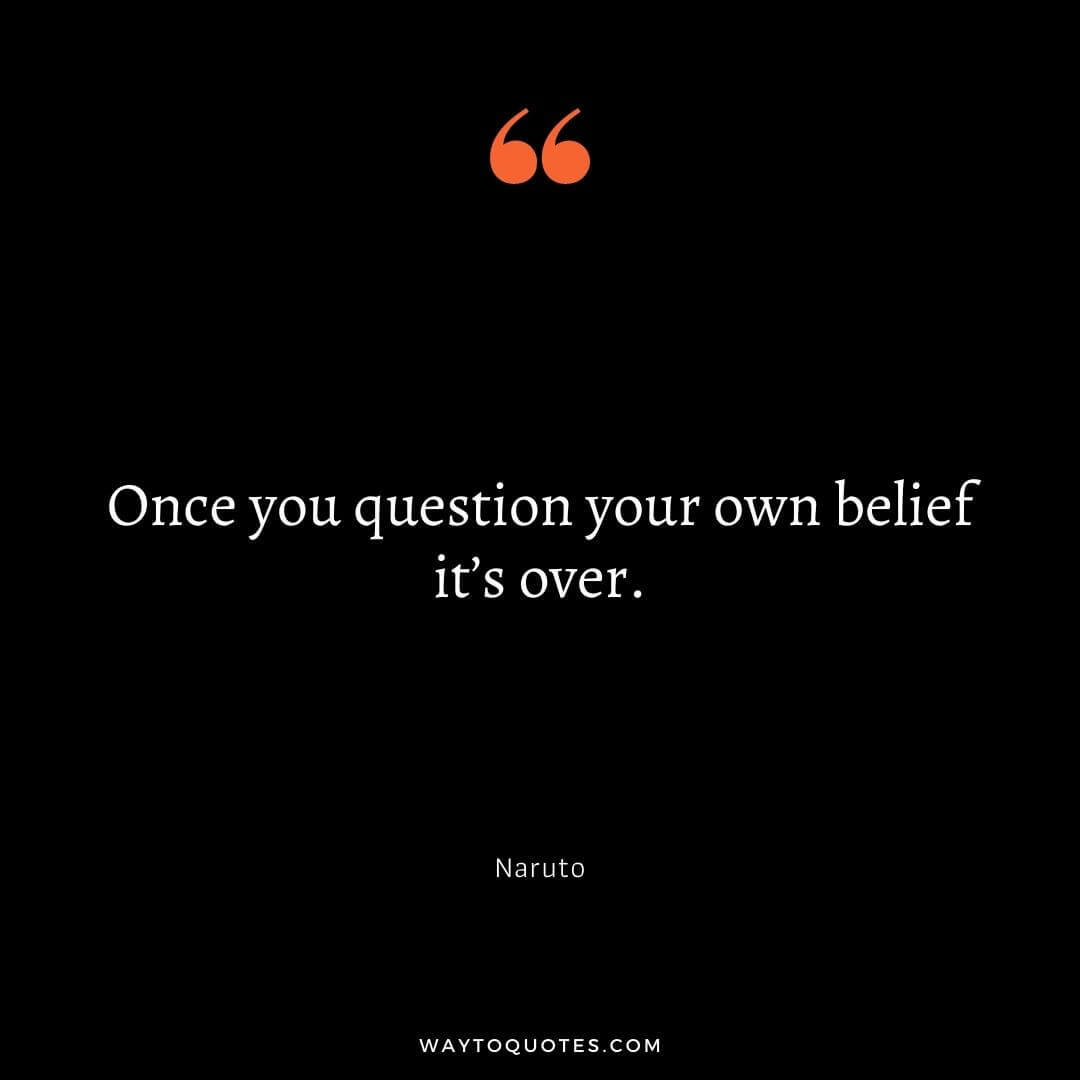 43. “People who continue to put their lives on the line to defend their faith become heroes and continue to exist on in legend.” – Naruto Uzumaki

44. “It’s human nature not to realize the true value of something unless they lose it.” – Orochimaru

45. “Never underestimate your opponent, no matter how small they may seem.” – Shino Aburame

46. “While you’re alive, you need a reason for your existence. Being unable to find one is the same as being dead.” – Naruto

47. “A person grows up when he’s able to overcome hardships. Protection is important, but there are some things that a person must learn on his own.” – Jiraiya

48. “Hard work is worthless for those that don’t believe in themselves.” – Naruto

49. “It’s not the face that makes someone a monster, it’s the choices they make with their lives.” – Naruto

50. “The moment people come to know love, they run the risk of carrying hate.” – Obito Uchiha

52. “I care more about others than I do myself, and I won’t let anyone hurt them.” – Naruto

53. “Love breeds sacrifice, which in turn breeds hatred. Then you can know pain.” – Naruto

54. “It is only through the eyes of others that our lives have any meaning.” – Haku

55. “I want to be with you. From now on, I want to spend all and every single one of my days until I die with you, and only you.” – Naruto Uzumaki

56. “A place where someone still thinks about you is a place you can call home.” – Jiraiya

57. “When a man learns to love, he must bear the risk of hatred.” – Madara Uchiha

58. “If you don’t share someone’s pain, you can never understand them.” – Nagato

59. “Those who forgive themselves, and are able to accept their true nature… They are the strong ones!” – Itachi Uchiha

61. “It’s foolish to fear what we’ve yet to see and know.” – Masashi Kishimoto

62. “The difference between insanity and genius is measured only by success and failure.” – Masashi Kishimoto

63. “Laziness is the mother of all bad habits, but ultimately she is a mother and we should respect her.” – Shikamaru Nara

64. “Having too many bonds causes one to lose focus, weakening their strongest wish, their greatest desire.” – Sasuke Uchiha

66. “I will become a bigger badass than my father. And a stronger shinobi than my mother!” – Naruto Uzumaki

67. “I have long since closed my eyes… My only goal is in the darkness.” – Sasuke Uchiha

68. “A soul needs a purpose to live and so I concluded that my purpose was to kill everyone besides myself. I felt alive.” – Masashi Kishimoto

69. “There’s only one thing that can heal the heart… Only one… It’s love.” – Masashi Kishimoto

70. “A smile is the best way to get away with trouble even if it’s a fake one.” – Masashi Kishimoto

71. “There’s no advantage to hurrying through life.” – Masashi Kishimoto

There is not much content that serves entertainment as well as some thought-provoking insights on humans. We are not here to give any spoilers but the show showcases the hardships that people face in their daily life but with a superficial storyline to balance the reality and fiction aspect. So if you have not already watched it then start the series now and get on the roller coaster of emotions.