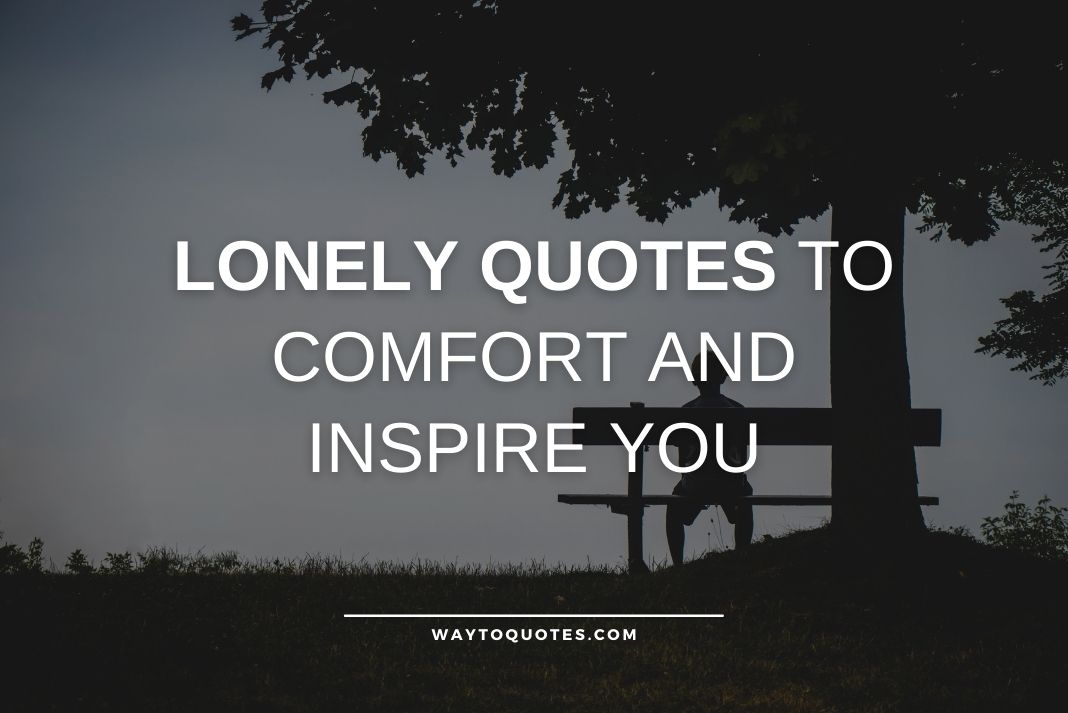 No matter how many friends we have and how much love we are surrounded with, we all have been in a state in our lives when we feel lonely. And it feels awful. We have brought you this amazing collection of Lonely Quotes by famous authors, philosophers, and other personalities that will uplift you and help to cope up with the situation.

People tend to confuse being lonely and being alone. Just because you are alone doesn’t mean you are lonely. Loneliness is a feeling you can have even when you are in a crowd. Feeling lonely is a hint that you need to look into yourself and inspect why you are feeling like that. Change your loneliness into solitude. Solitude is a state where you feel that you are enough and you are okay being alone.

Let’s dive into these lonely quotes that are going to make you feel comfortable with being alone and give you strength.
Also share these quotes with your friends who you think are lonely.

“The greatest thing in the world is to know how to belong to oneself.” – Michel de Montaigne

“People think being alone makes you lonely, but I don’t think that’s true. Being surrounded by the wrong people is the loneliest thing in the world.” – Kim Culbertson

“A man can be himself only so long as he is alone; and if he does not love solitude, he will not love freedom; for it is only when he is alone that he is really free.” – Arthur Schopenhauer

“The most terrible poverty is loneliness and the feeling of being unloved.” –Mother Theresa

“It is good to be solitary, for solitude is difficult; that something is difficult must be a reason the more for us to do it.” – Rainer Maria Rilke

“Nothing can bring you peace but yourself.” – Ralph Waldo Emerson

“Sometimes you need to take a break from everyone and spend time alone to experience, appreciate, and love yourself.” – Robert Tew

“Inside myself is a place where I live all alone and that’s where you renew your springs that never dry up.” -Pearl Buck

“It is better to be lonely than allow people who are not going anywhere keep you from your destiny.” – Joel Osteen

“Loneliness is not lack of company, loneliness is lack of purpose.” – Guillermo Maldonado

“When everything is lonely I can be my best friend.” – Conor Oberst

“My loneliness was born when men praised my talkative faults and blamed my silent virtues.” – Khalil Gibran

“In solitude the mind gains strength and learns to lean upon itself.” – Laurence Sterne

“As I get older I’m more and more comfortable being alone.” – Sienna Miller

“Dreams have only one owner at a time. That’s why dreamers are lonely.” – Erma Bombeck 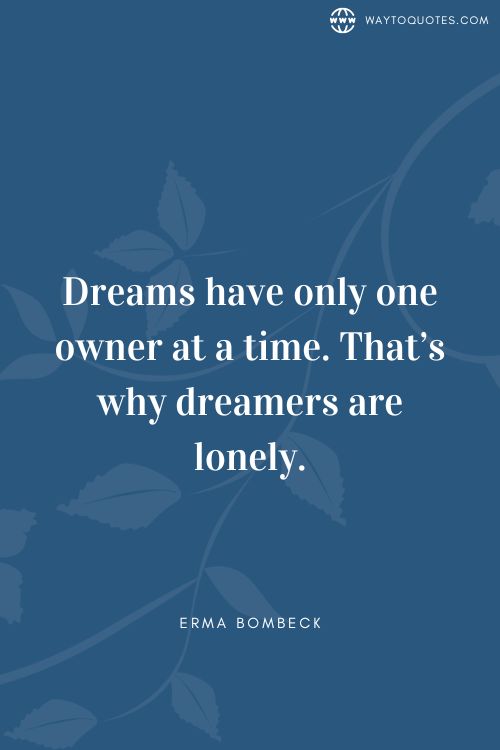 “There is a loneliness in this world so great that you can see it in the slow movement of the hands of a clock.” – Charles Bukowski

“The loneliness you feel with another person, the wrong person, is the loneliest of all.” – Deb Caletti

“Sometimes you need to be alone. Not to be lonely, but to enjoy your free time being yourself.”

“Loneliness can be conquered only by those who can bear solitude.” – Paul Tillich

“Sometimes you need to sit lonely on the floor in a quiet room in order to hear your own voice and not let it drown in the noise of others.” – Charlotte Eriksson

“Pray that your loneliness may spur into finding something to live for, great enough to die for.” – Dag Hammarskjold

“You are never alone. You are eternally connected with everyone.” – Amit Ray 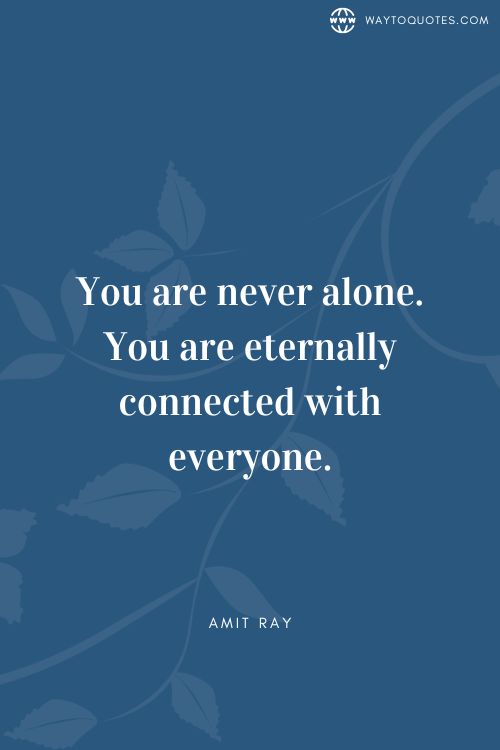 “The best part about being alone is that you really don’t have to answer to anybody. You do what you want.” – Justin Timberlake

“Remember: the time you feel lonely is the time you most need to be by yourself. Life’s cruelest irony.” – Douglas Coupland

“Music was my refuge. I could crawl into the space between the notes and curl my back to loneliness.” – Maya Angelou

“All great and precious things are lonely.” – John Steinbeck

“Make the time to be alone. Your best ideas live within solitude.” – Robin Sharma

“Solitude is the beginning of all freedom.”– William Orville Douglas

“Loneliness is painful. But suffering is not wrong in and of itself. It’s part of the human experience, and in a way brings us closer to all people.”- Juliette Fay

“Loneliness is like being the only person left alive in the universe, except that everyone else is still here.”- Simon Van Booy

“If you go deeper and deeper into your own heart, you’ll be living in a world with less fear, isolation and loneliness.” – Sharon Salzberg

“I want to be with those who know secret things or else alone.” – Rainer Maria Rilke

“My inspirations are the woman, friendship, and loneliness.”–Enrique Iglesias

“Loneliness is proof that your innate search for connection is intact.” – Martha Beck

“The only time we waste is the time we spend thinking we are alone.” – Mitch Albom

“Sometimes, you just need a break. In a beautiful place. Alone. To figure everything out.”

“Sometimes you have to stand alone. Just to make sure you still can.”

“To live alone is the fate of all great souls.” – Arthur Schopenhauer

“You’re only lonely if you’re not there for you.” – Phil McGraw

“Solitude is where one discovers one is not alone.”- Marty Rubin

“There are people who like to be alone without feeling lonely at all.”- Toba Beta 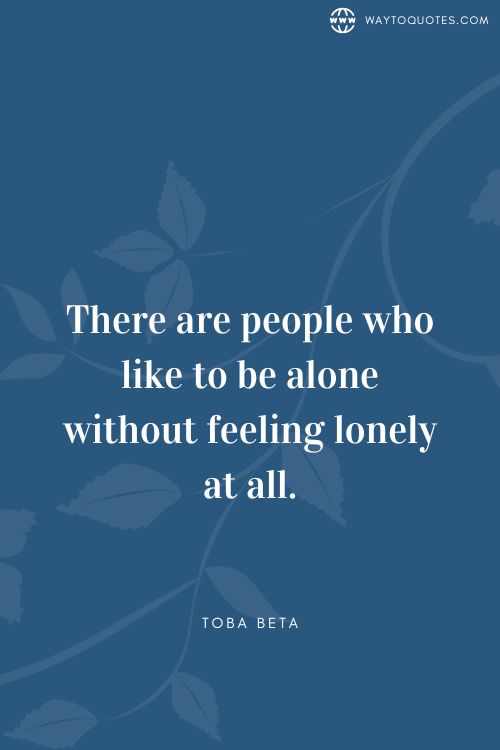 “I learned that day that there is no more lonely state than being in a lonely marriage.”- Julie Metz

“We’ve got a bond in common, you and I. We are both alone in the world.”- Daphne du Maurier

“Loneliness is the human condition. Cultivate it. The way it tunnels into you allows your soul room to grow. Never expect to outgrow loneliness.” – Janet Fitch

“If you are afraid of being lonely don’t try to be right.” –Jules Renard

“It’s easy to stand in the crowd but it takes courage to stand alone.” – Mahatma Gandhi

“What a lovely surprise to finally discover how unlonely being alone can be.” –Ellen Burstyn 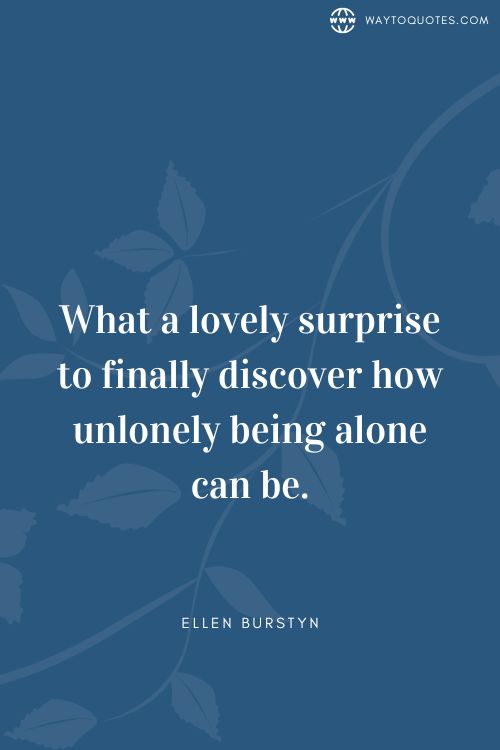 “Sometimes I think that my own company is more suitable for me than if I were around others. Because of the person that I am.” –Kyle Labe

“If a man cannot understand the beauty of life it is probably because life never understood the beauty in him.” –Criss Jami

It is far better to be alone than to be in bad company.” – George Washington

“It’s weird to feel like you miss someone you’re not even sure you know.” – David Foster Wallace

Lonely Quotes for Him

“The strongest man in the world is he who stands most alone.” –Henrik Ibsen

“All men’s misfortunes spring from their hatred of being alone.” –Jean de La Bruyère

“People run away to be alone,’ he said. Some people had to be alone.”- William Trevo 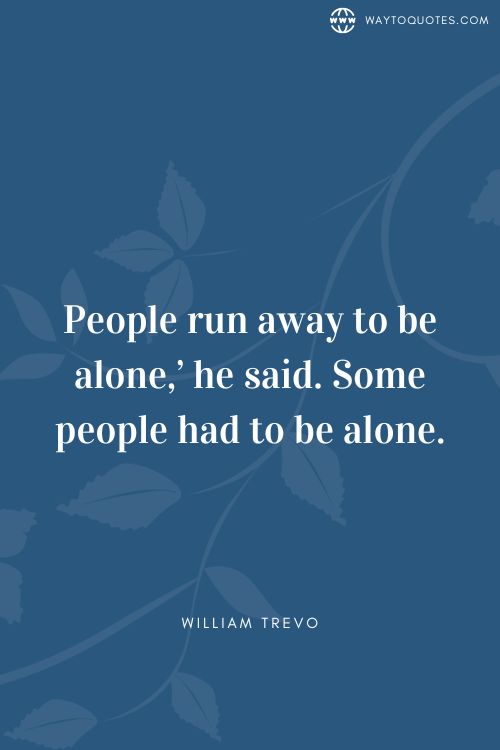 “When we truly realize that we are all alone is when we need others the most.” –Ronald Anthony Cross

“No one is ever alone and silence does not equate defeat.” – Joan Ambu

“Life is full of misery loneliness and suffering-and it’s all over much too soon.” –Woody Allen

“If you wanted to do something absolutely honest, something true, it always turned out to be a thing that had to be done alone.” – Richard Yates

“Sometimes it’s better to be alone no one can hurt you that way.”– Tinku Razoria

“The sun loved me again when it saw that the stars would not abandon me.”- Jenim Dibie 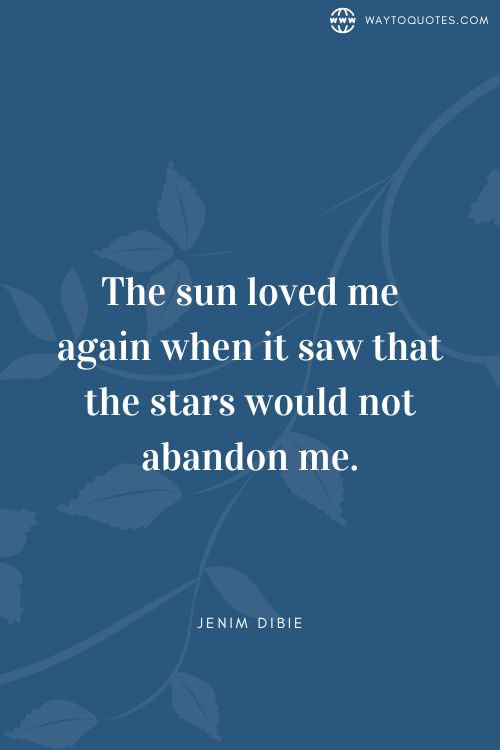 “It’s only natural to feel lonely after the enjoyable moments pass. But as you experience new joys those feelings of sorrow will start to fade.”- Mizu Sahara

“If one is lucky, a solitary fantasy can totally transform one million realities.” – Maya Angelou

“I am lonely, sometimes, but I dare say it’s good for me…”- Louisa May Alcott

“Sometimes being surrounded by everyone is the loneliest, because you’ll realize you have no one to turn to.”- Soraya

“You’ll end up living a lonely life if you’re waiting around for perfect.”- Samantha Young

“You never walk alone. Even the devil is the lord of flies.”- Gilles Deleuze 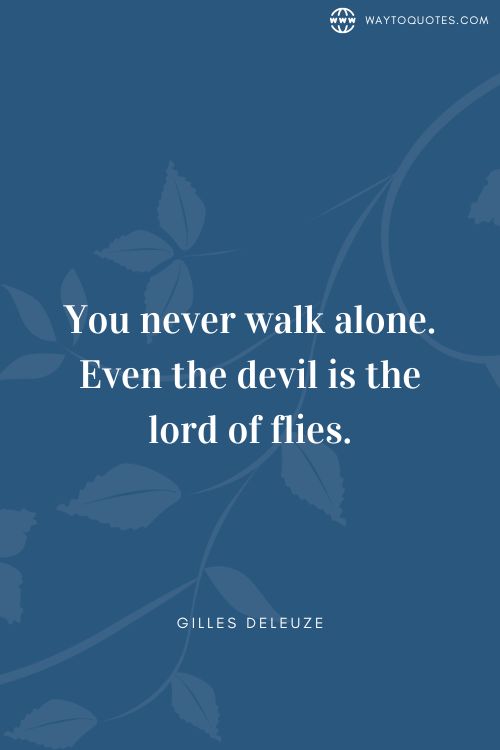 “There is a certain strength in being alone.” – Heather Duffy Stone

“Always remember that you were once alone, and the crowd you see in your life today are just as unnecessary as when you were alone.”- Michael Bassey Johnson

“The worst thing about loneliness is that it brings one face to face with oneself.”- Mary Balogh

“I had been alone more than I could have been had I gone by myself.”- Sylvia Plath

“Loneliness is my least favorite thing about life. The thing that I’m most worried about is just being alone without anybody to care for or someone who will care for me.” – Anne Hathaway

“We’re born alone, we live alone, we die alone. Only through our love and friendship can we create the illusion for the moment that we’re not alone.”– Orson Welles

Lonely Quotes for Her

“She understood how a world jammed with phones, email, and faxes could still leave you feeling utterly alone.”- Jodi Picoult

“Forgiving, that’s what she is, and lonely. A person can forgive a lot if they need the company.”- Ali Land 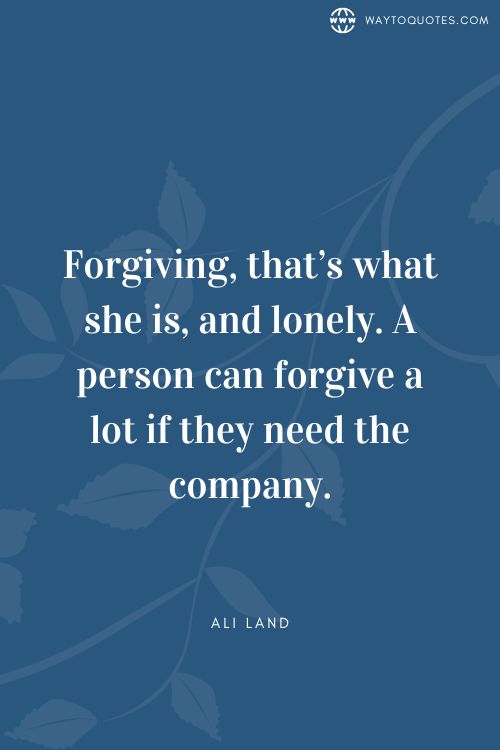 “I love to be alone. I never found the companion that was so companionable as solitude.” – Henry David Thoreau

“The surest sign of age is loneliness.” – Annie Dillard

“This world that I live in is empty and cold. The loneliness cuts me and tortures my soul.” –Waylon Jennings

“Loneliness is about the scariest thing out there.” –Joss Whedon

“When you are lonely for a while don’t get restless, if you had born alone, you are going to die alone then for sometime you can certainly live alone.”- Amit Kalantri

“One of the greatest regrets in life is being what others would want you to be, rather than being yourself.” – Shannon L. Alder

“Even in the loneliest moments I have been there for myself.” – Sanober Khan

“Being alone has a power that very few people can handle.” – Steven Aitchison

“I live in that solitude which is painful in youth, but delicious in the years of maturity” – Albert Einstein

“Lonely was much better than alone.” –Toni Morrison

“I’m all alone but I’m not lonely.” – Haruki Murakami

“Loneliness is a state of feeling that can be changed. People may still feel lonely even among the crowd.”- Toba Beta

“All man’s miseries derive from not being able to sit quietly in a room alone.” – Blaise Pascal

“Loneliness is and always has been the central and inevitable experience of every man.” – Thomas Wolfe

“Loneliness is the prison of the human spirit. When we are lonely, we pace back and forth in small, shut-in worlds.”- John Joseph Powell

“Loneliness becomes an acid that eats away at you.” – Haruki Murakami

“I did not know I was lonely, she thought, until I was no longer alone.”- Katherine Arden

“Hanging with people who make you feel unappreciated, for the mere sake of appearing to be popular, is the loneliest place to be.”- Ellen J. Barrier

“The Internet is for lonely people. People should live.”- Charlton Heston

Loneliness is a natural feeling and we all feel like that now and then but don’t let this feeling damage you. Change your attitude about yourself and think great of yourself. You were born alone and you are going to die alone then why are you afraid of living alone? We hope these Lonely Quotes by famous authors, philosophers, and other personalities give you strength and uplift you.