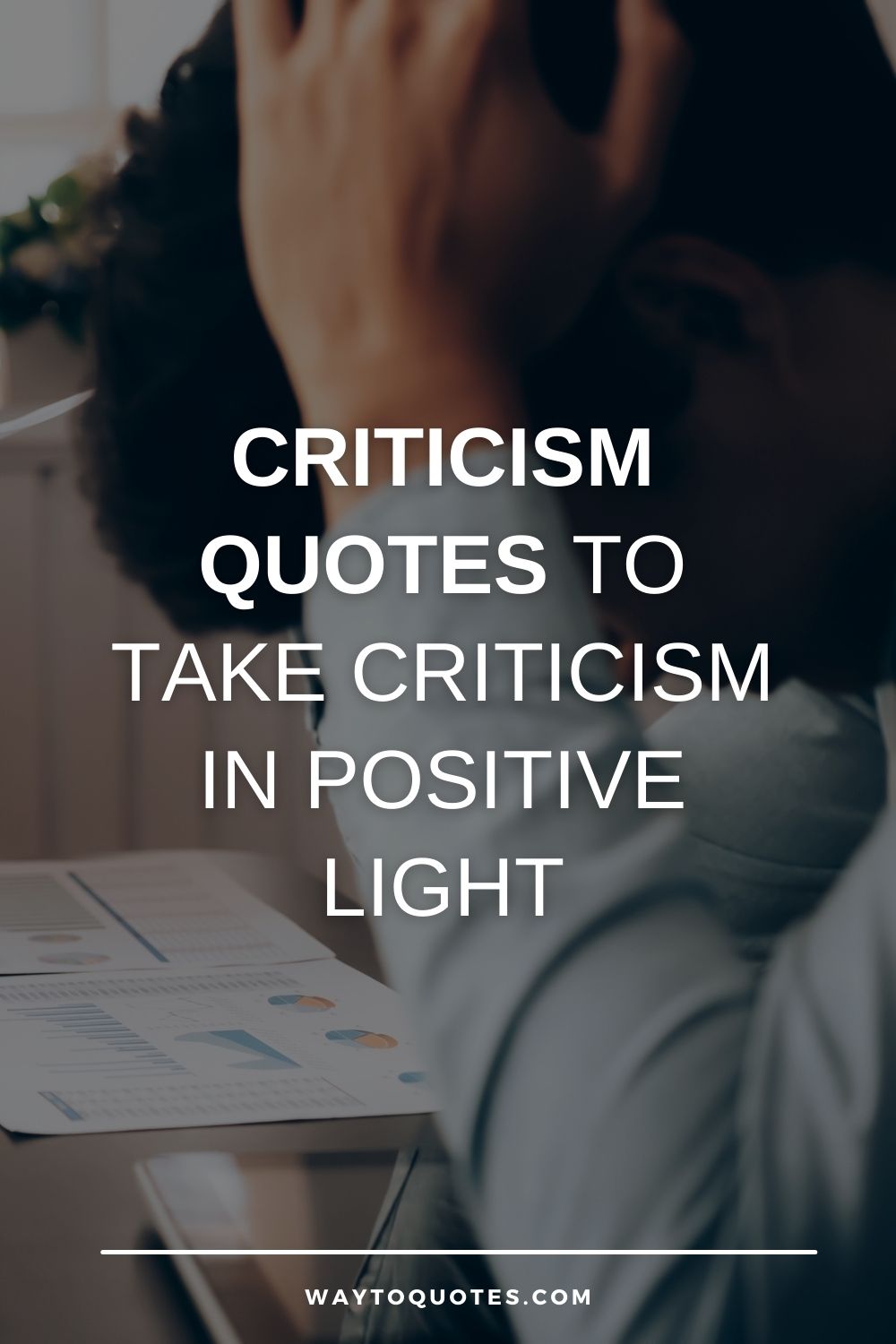 Every negative element in this world has a positive side to it. Similarly, every criticism that you come across has one of the two positive messages behind it. The first could be that the baseless criticism that comes from an envious person just to make you feel bad because you are doing better than them in life, you can take this one as a compliment or just ignore. The second type might be the one that holds some truth to it, if it is so, then instead of feeling bad, improve yourself for yourself. And here are the best Criticism Quotes and Sayings that will help you in assessing the words of criticism, weighing their truthfulness, and acting accordingly.

The world is not all cupcakes and cherries and nobody is perfect. But there are people out there who think that they are entitled to reminding other people of their weaknesses or some other negative aspects. We cannot get rid of such people. But what we can do is take the criticism in a positive light and use it to become a self-confident and improved version of ourselves.

Build your confidence with the falsely acclaimed criticism and improve yourself with the true ones. So here are the best Criticism Quotes and Sayings to do so:

1. “Criticism, like rain, should be gentle enough to nourish a man’s growth without destroying his roots.” – Frank A. Clark 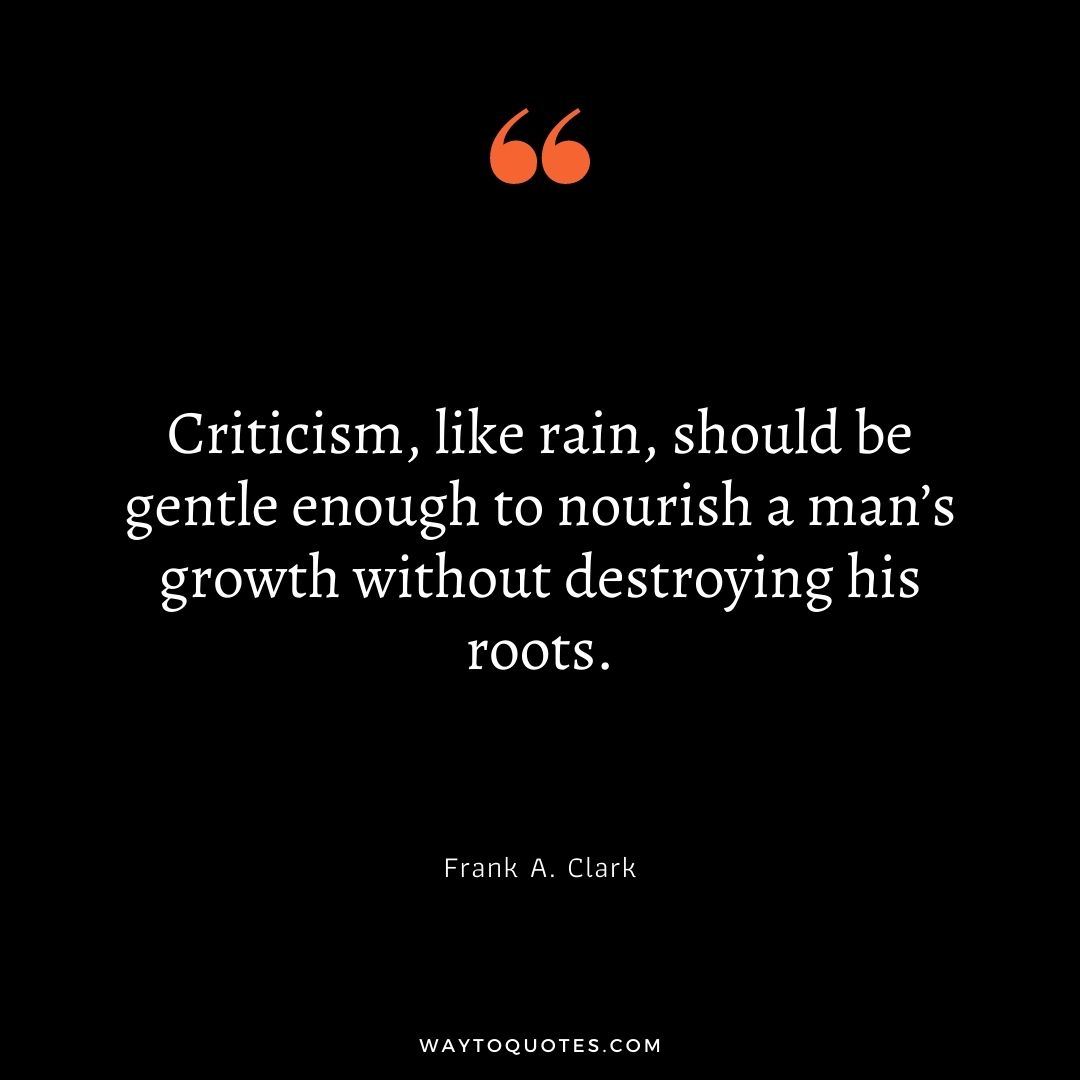 2. “People tend to criticize their spouse most loudly in the area where they themselves have the deepest emotional need.” – Gary Chapman

3. “Criticism is the disapproval of people, not for having faults, but having faults different from your own.” – Unknown

4. “Before you go and criticize the younger generation, just remember who raised them.” – Unknown

5. “Criticism may not be agreeable, but it is necessary. It fulfills the same function as pain in the human body. It calls attention to an unhealthy state of things.” – Winston Churchill 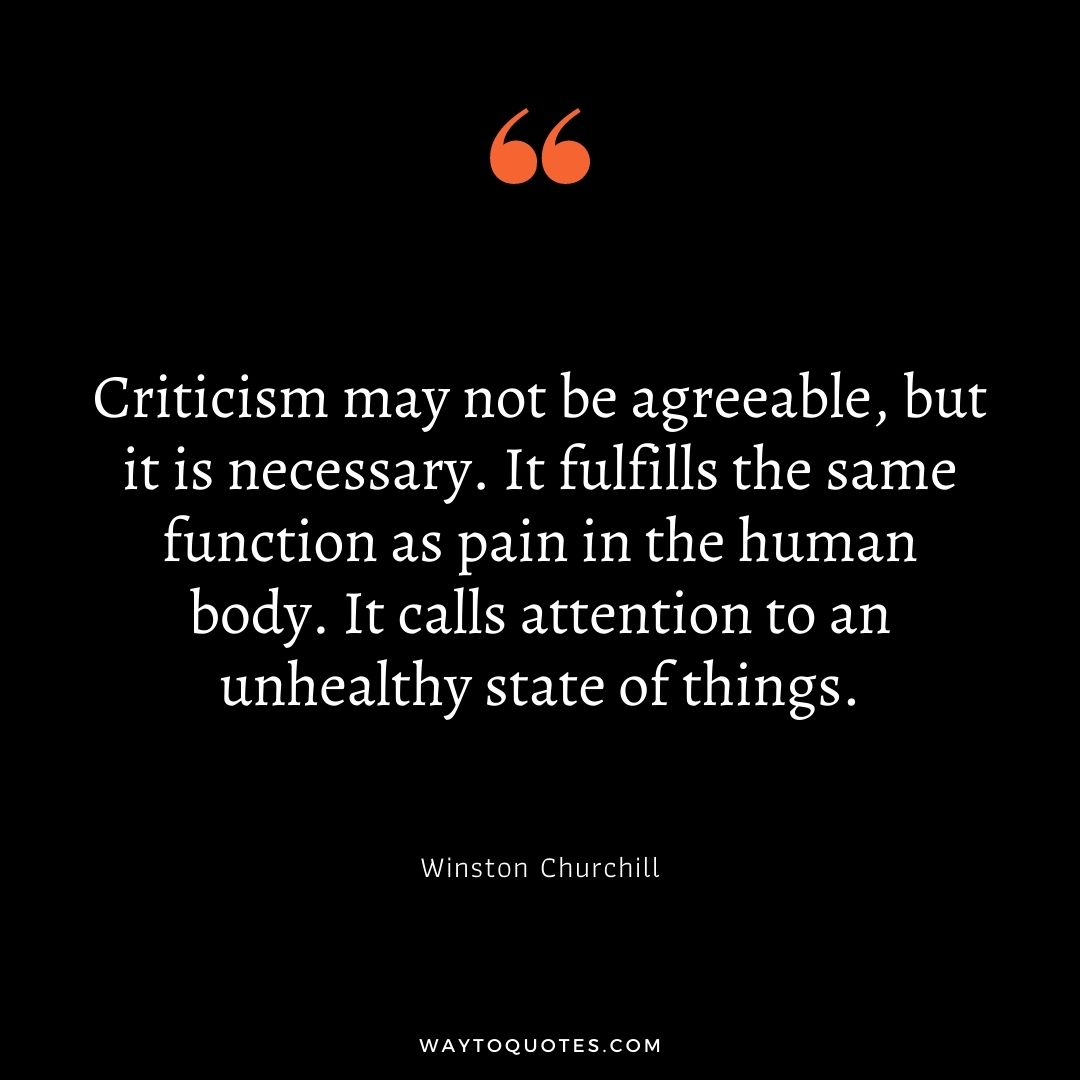 7. “If we judge ourselves only by our aspirations and everyone else only by their conduct, we shall soon reach a very false conclusion.” – Calvin Coolidge

8. “The final proof of greatness lies in being able to endure criticism without resentment.” – Elbert Hubbard

9. “When we speak evil of others, we generally condemn ourselves.” – Publius Syrus 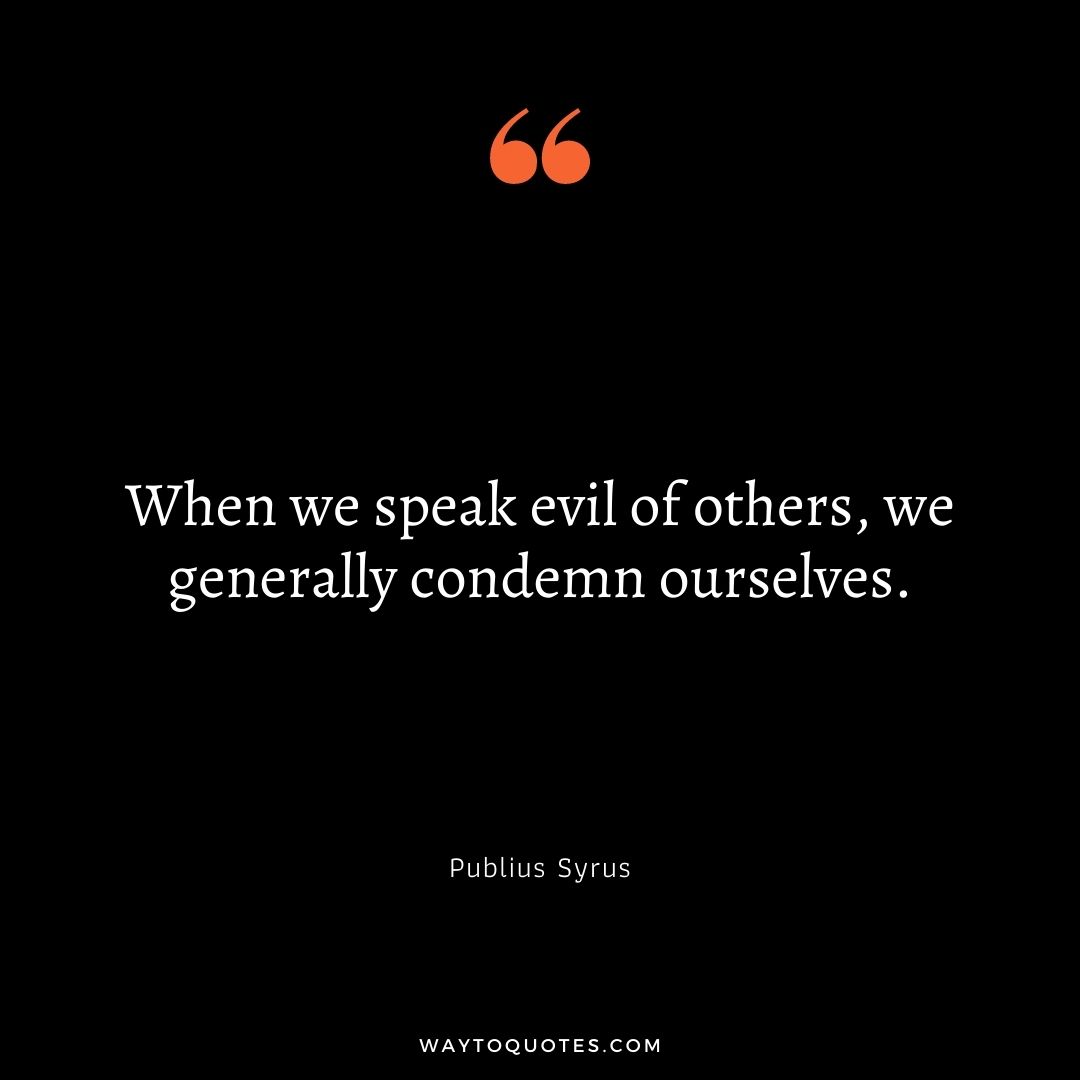 15. “Analyses of others are actually expressions of our own needs and values.” – Marshall Rosenberg

16. “Don’t be distracted by criticism. Remember, the only taste of success some people have is when they take a bite out of you.” – Zig Ziglar

17. “I much prefer the sharpest criticism of a single intelligent man to the thoughtless approval of the masses.” – Johannes Kepler 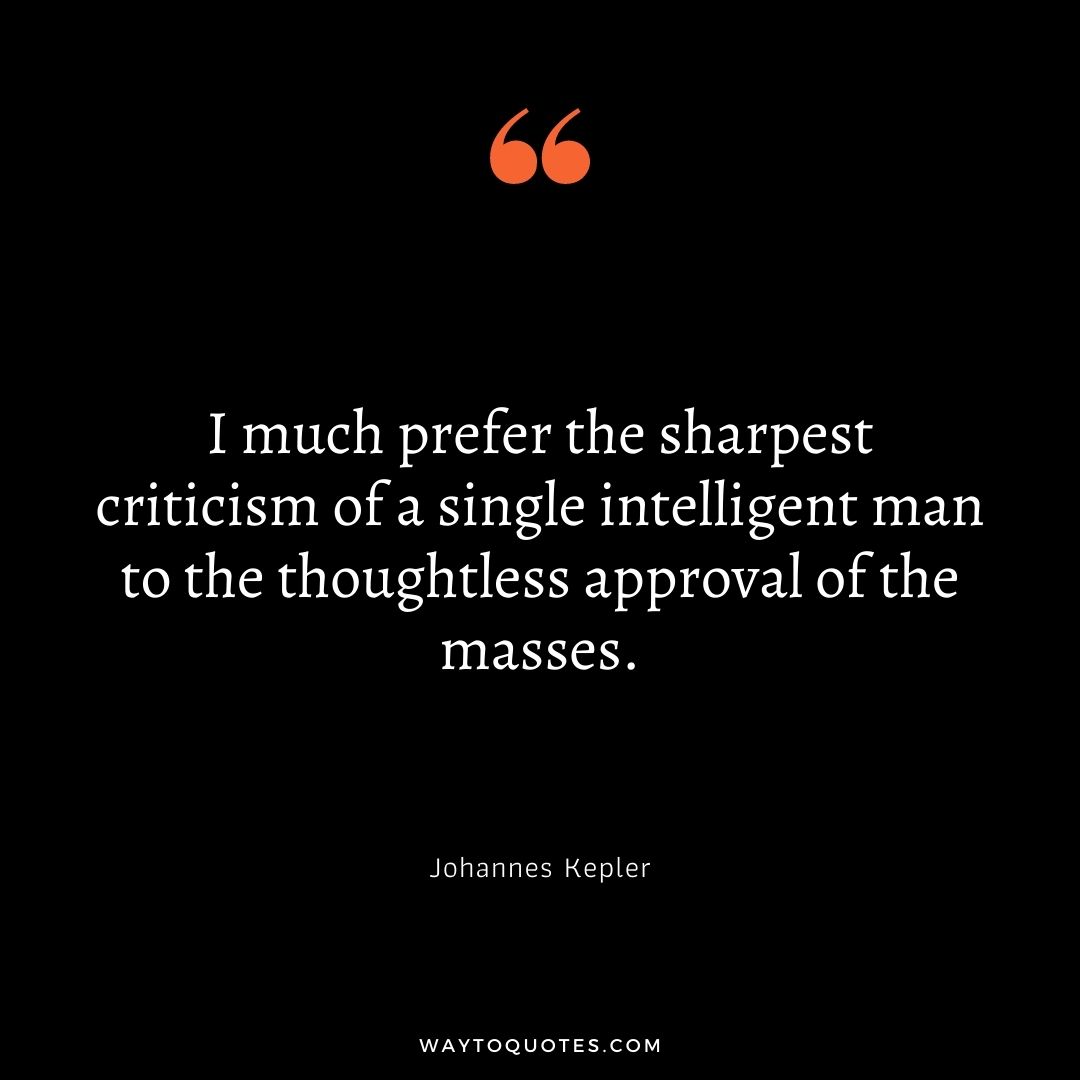 18. “Take criticism, smash it into dust, add color & use it to paint breathtaking images of unicorns frolicking thru endless fields of greatness.” – Matthew Gray Gubler

19. “As a matter of fact, we are none of us above criticism; so let us bear with each other’s faults.” – L. Frank Baum

20. “Having the critics praise you is like having the hangman say you’ve got a pretty neck.” – Eli Wallach

21. “If you say something and reject any criticism, then your words truly meant to advise yourself.” – Toba Beta 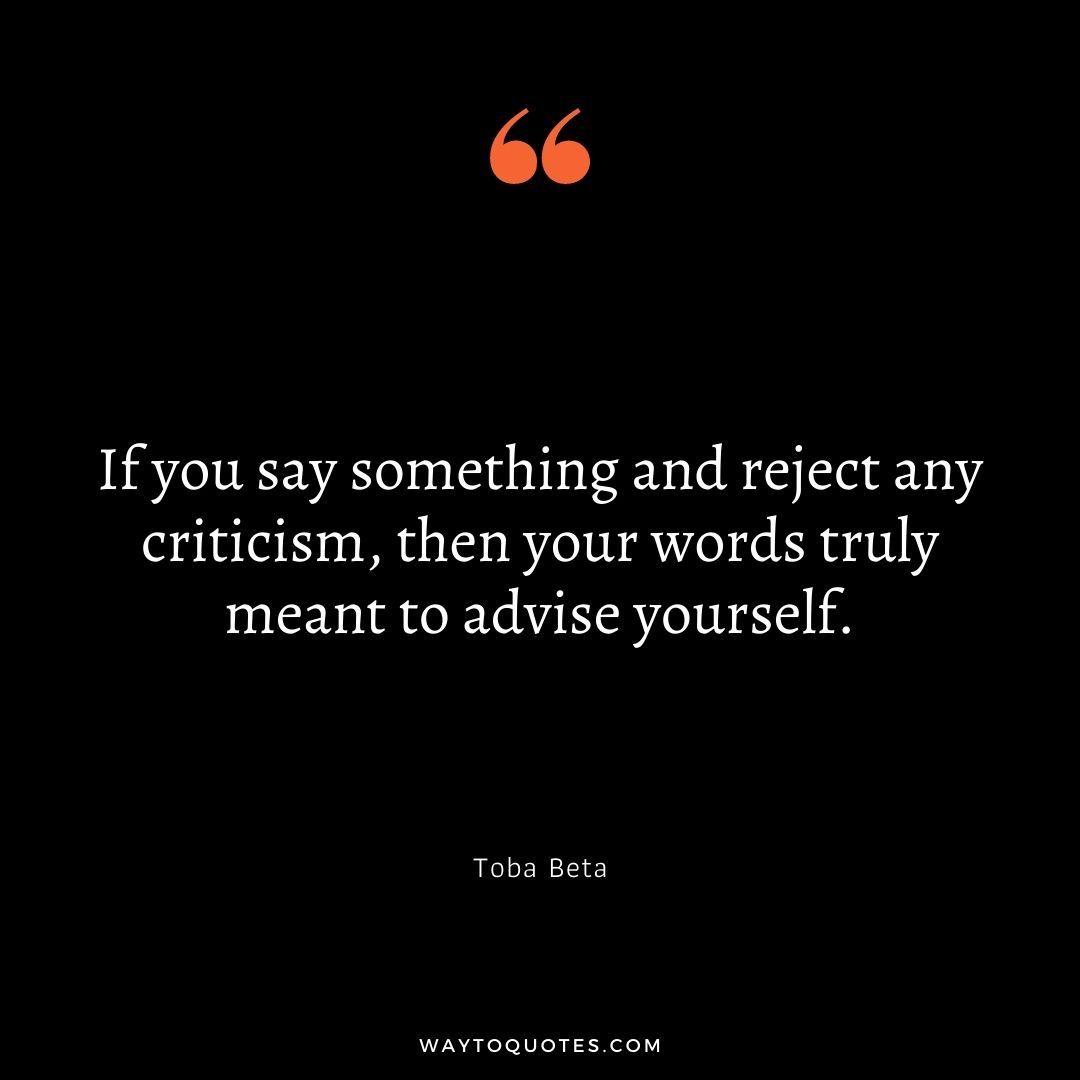 23. “One mustn’t criticize other people on grounds where he can’t stand perpendicular himself.” – Mark Twain

24. “He has a right to criticize who has a heart to help.” – Abraham Lincoln

25. “Strength and growth come only through continuous effort and struggle.” – Napoleon Hill 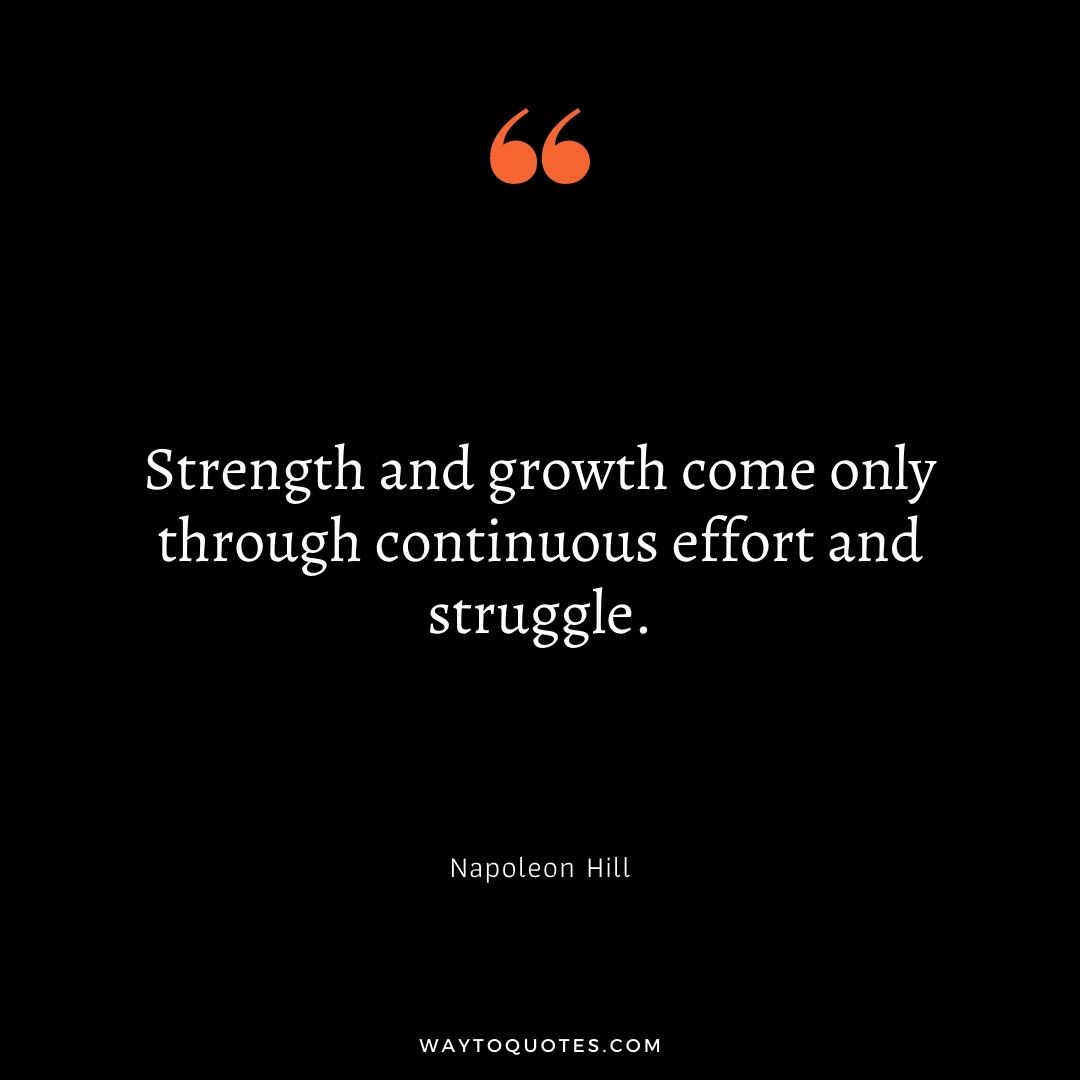 26. “You have enemies? Good. That means you’ve stood up for something sometime in your life.” – Winston Churchill

27. “If your heart acquires strength, you will be able to remove blemishes from others without thinking evil of them.” – Mohandas K. Gandhi

28. “You can’t let praise or criticisms get to you. It’s a weakness to get caught up in either one.” – John Wooden

29. “When men speak ill of thee, live so as nobody may believe them.” – Plato 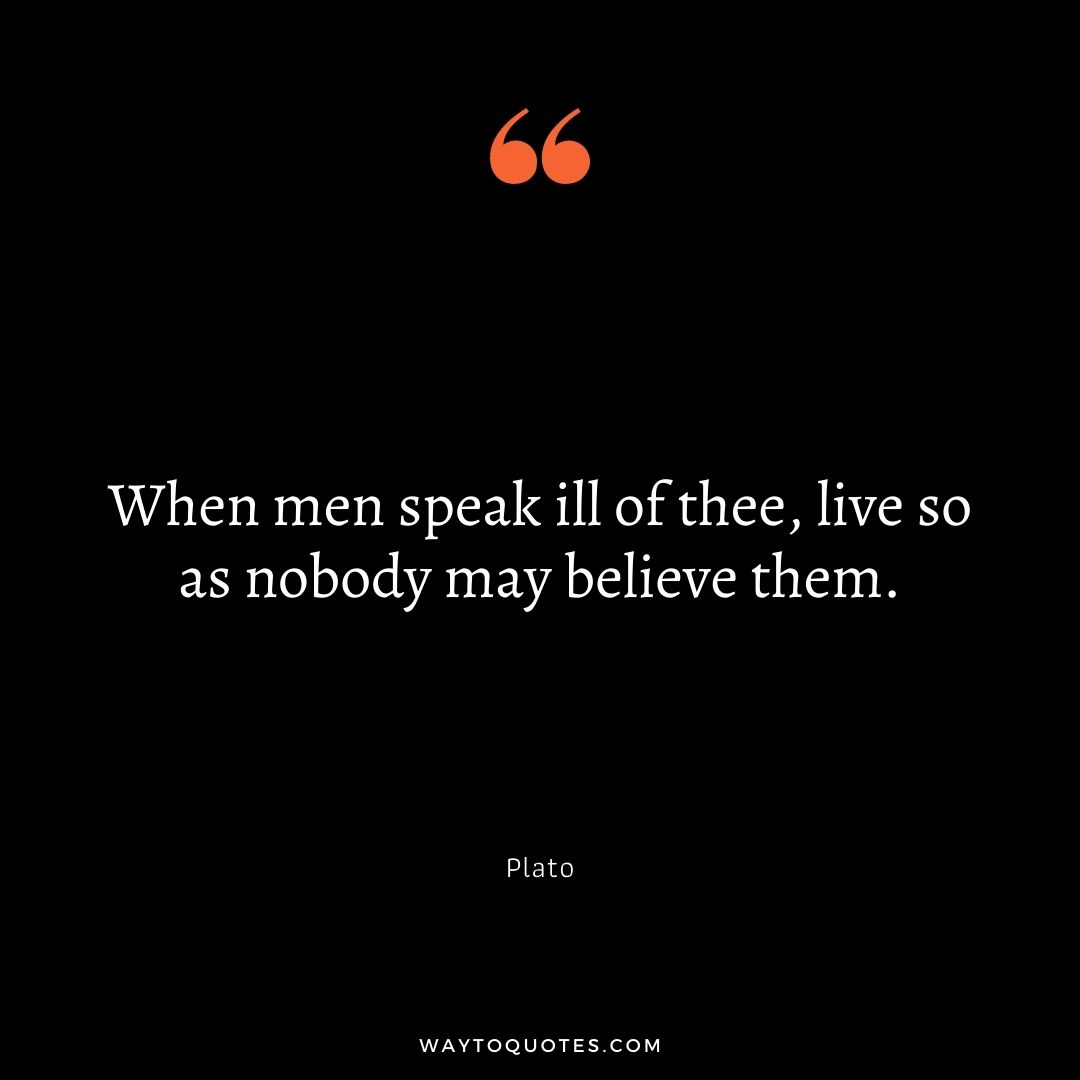 30. “My opinions and principles are subjects of just criticism.” – Victoria Woodhull

31. “Most people have been brainwashed into believing that their job is to copyedit the world, not to design it.” – Seth Godin

32. “A creative life cannot be sustained by approval any more than it can be destroyed by criticism.” – Will Self

33. “The individual must not merely wait and criticize, he must defend the cause the best he can. The fate of the world will be such as the world deserves.”  – Albert Einstein 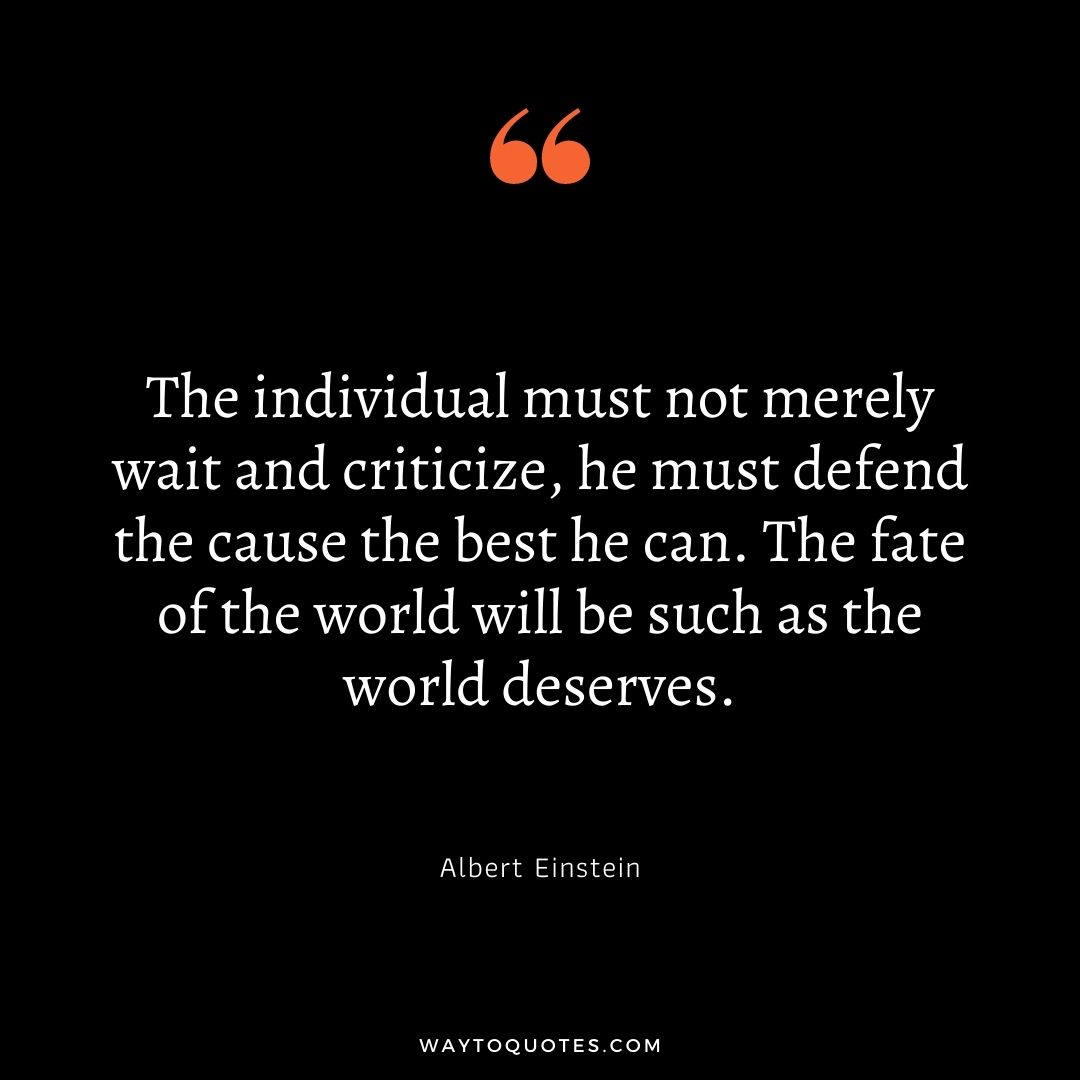 34. “Don’t criticize what you don’t understand, son. You never walked in that man’s shoes.” – Elvis Presley

35. “What distinguishes modern art from the art of other ages is criticism.” – Octavio Paz

36. “If someone criticizes you, give them a compliment.” – Debasish Mridha

37. “The criminal is the creative artist; the detective only the critic.” – G.K. Chesterton

38. “Criticism is something we can avoid easily by saying nothing, doing nothing, and being nothing.” – Aristotle

39. “Don’t criticize them; they are just what we would be under similar circumstances.” – Abraham Lincoln

40. “Any fool can criticize, condemn, and complain but it takes character and self-control to be understanding and forgiving.” – Dale Carnegie

41. “Boredom, after all, is a form of criticism.” – Wendell Phillips

42. “If we are bold enough to point out problems, we must be brave enough to try to solve them.” – Robert Alan Silverstein 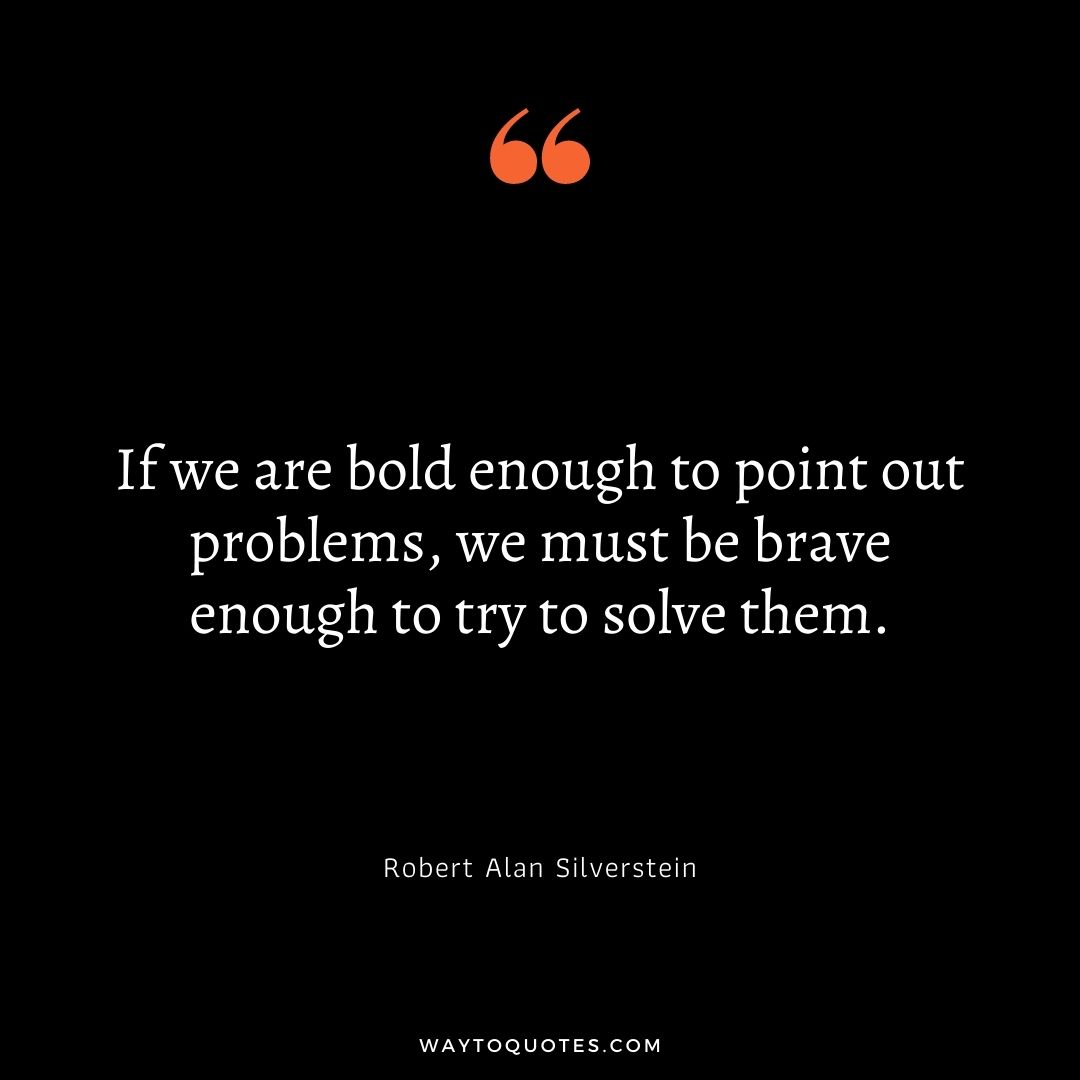 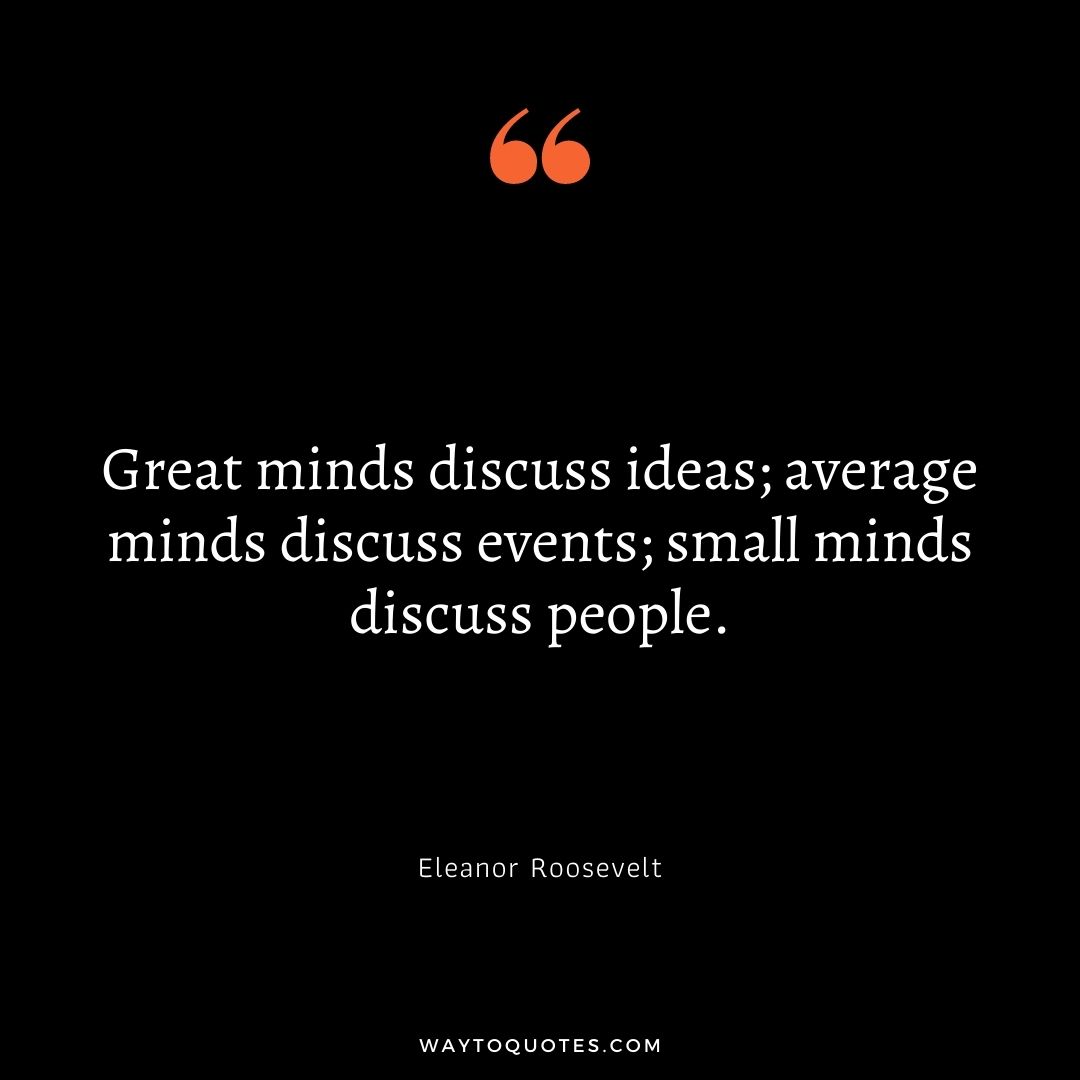 47. “Criticism is an indirect form of self-boasting.” – Emmit Fox

48. “Think not those faithful who praise all thy words and actions; but those who kindly reprove thy faults.” – Socrates

49. “The trouble with most of us is that we’d rather be ruined by praise than saved by criticism.” – Norman Vincent Peale

50. “Think before you speak is criticism’s motto; speak before you think, creation’s.” – E. M. Forster 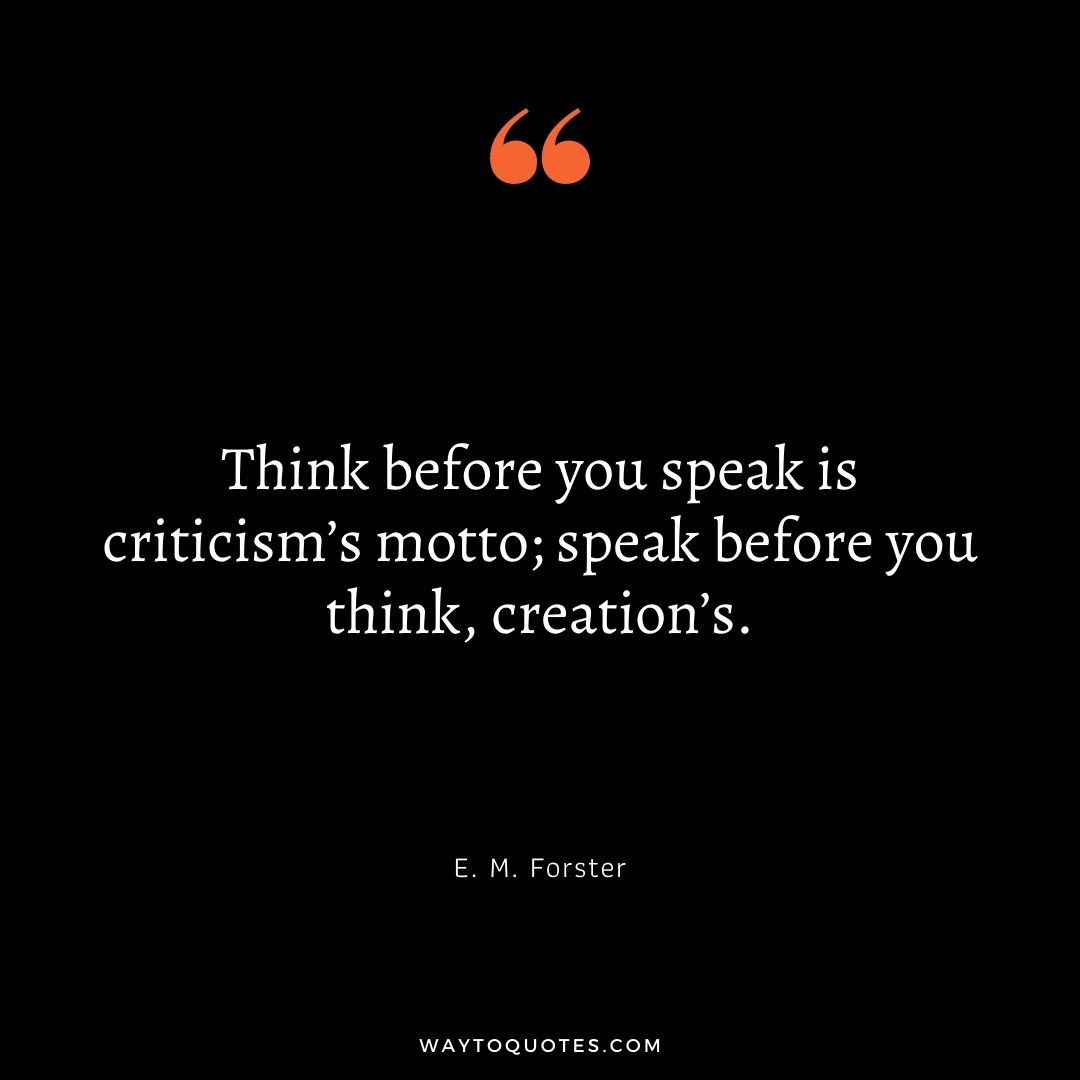 51. “It is much more valuable to look for the strength in others. You can gain nothing by criticizing their imperfections.” – Daisaku Ikeda

52. “Critics sometimes appear to be addressing themselves to works other than those I remember writing.” – Joyce Carol Oates

53. “If we judge ourselves only by our aspirations and everyone else only their conduct we shall soon reach a very false conclusion.” – Calvin Coolidge

54. “I criticize by creation, not by finding fault.” – Marcus Tullius Cicero 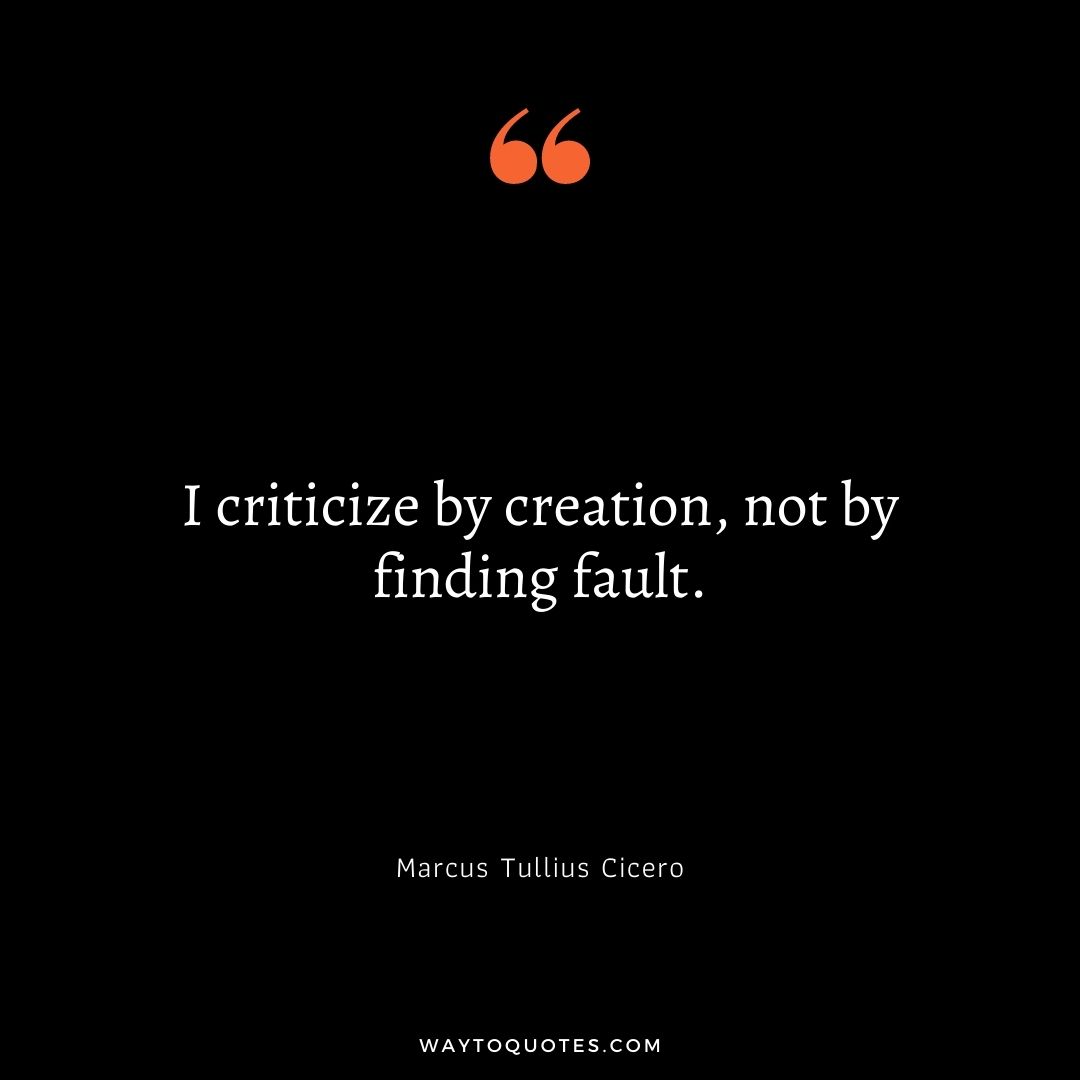 55. “When we judge or criticize another person, it says nothing about that person; it merely says something about our own need to be critical.” – Unknown

56. “You can’t let praise or criticism get to you. It’s a weakness to get caught up in either one.” – John Wooden

57. “Criticism is an indirect form of self-boasting.” – Emmet Fox

58. “I criticize by creation, not by finding fault.” – Marcus Tullius Cicero

59. “Any fool can criticize, condemn and complain and most fools do.” – Benjamin Franklin 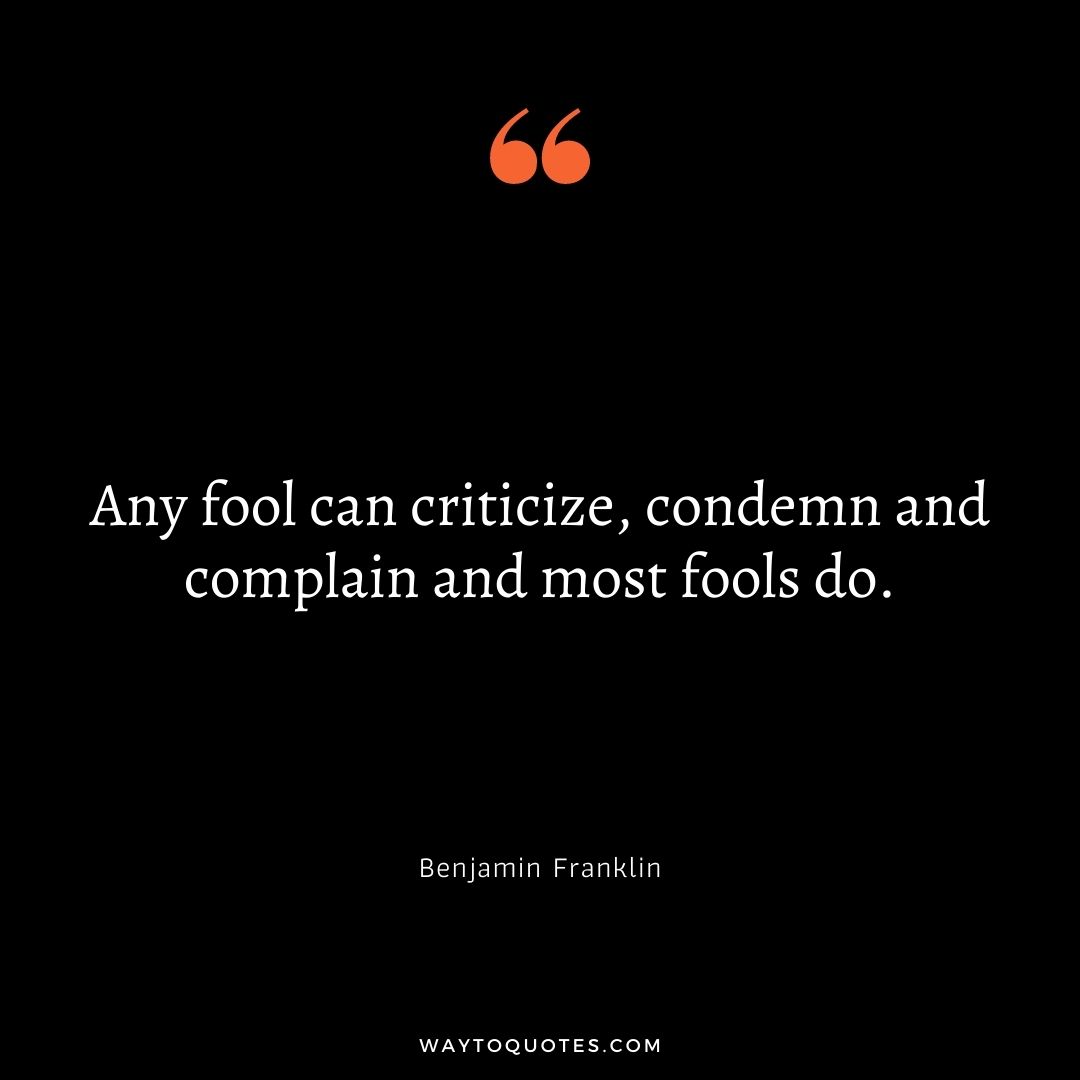 61. “Let me never fall into the vulgar mistake of dreaming that I am persecuted whenever I am contradicted.” – Ralph Waldo Emerson

62. “A critic is a legless man who teaches running.” – Channing Pollock

63. “The pleasure we feel in criticizing robs us from being moved by very beautiful things.” – Jean De La Bruyere 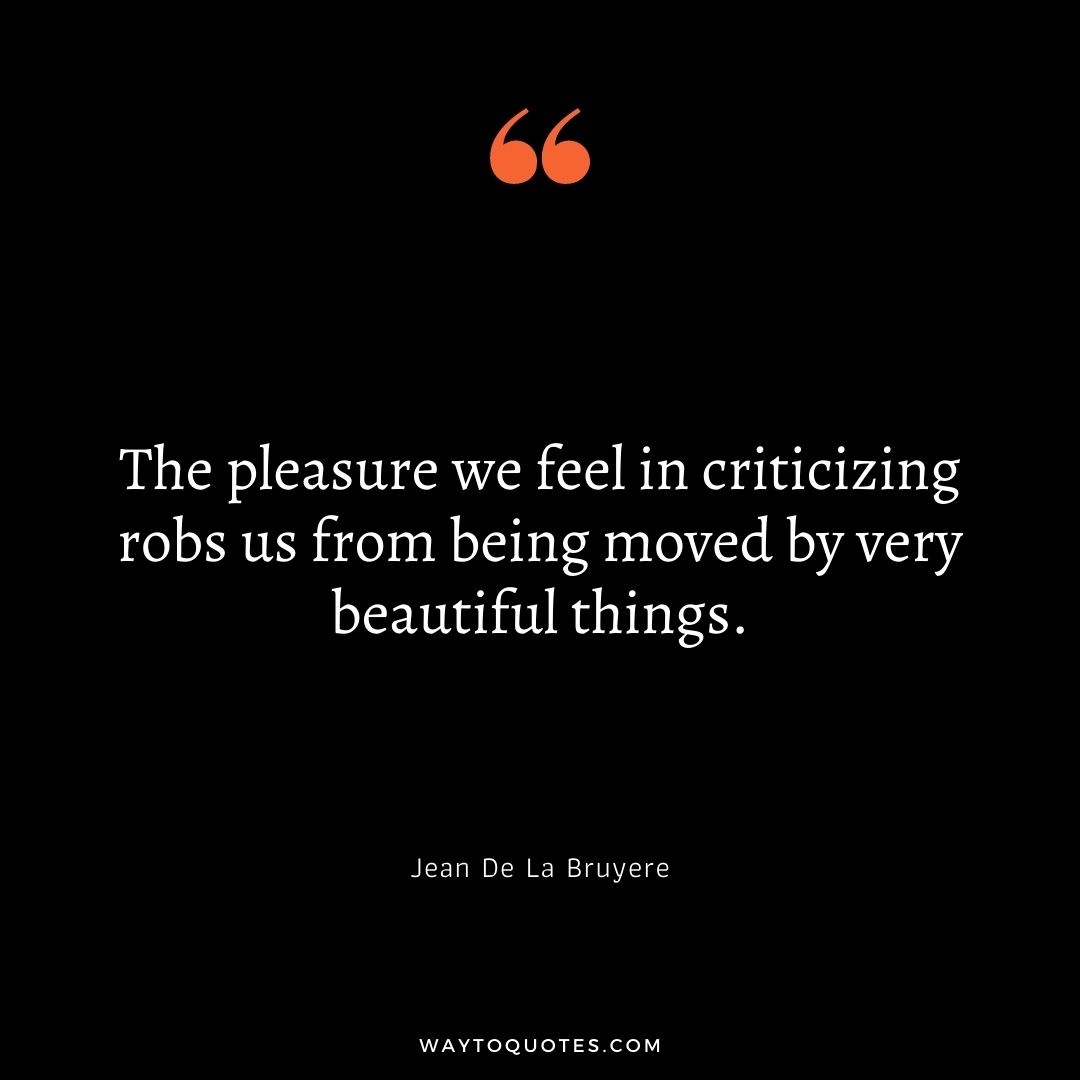 64. “Interpretation is the revenge of the intellectual upon art.” – Susan Sontag

65. “People ask you for criticism, but they only want praise.” – W. Somerset Maugham

66. “I pay no attention to anybody’s praise or blame. I simply follow my own feelings.” – Wolfgang Amadeus Mozart

67. “Don’t criticize what you don’t understand, son. You never walked in that man’s shoes.” – Elvis Presley 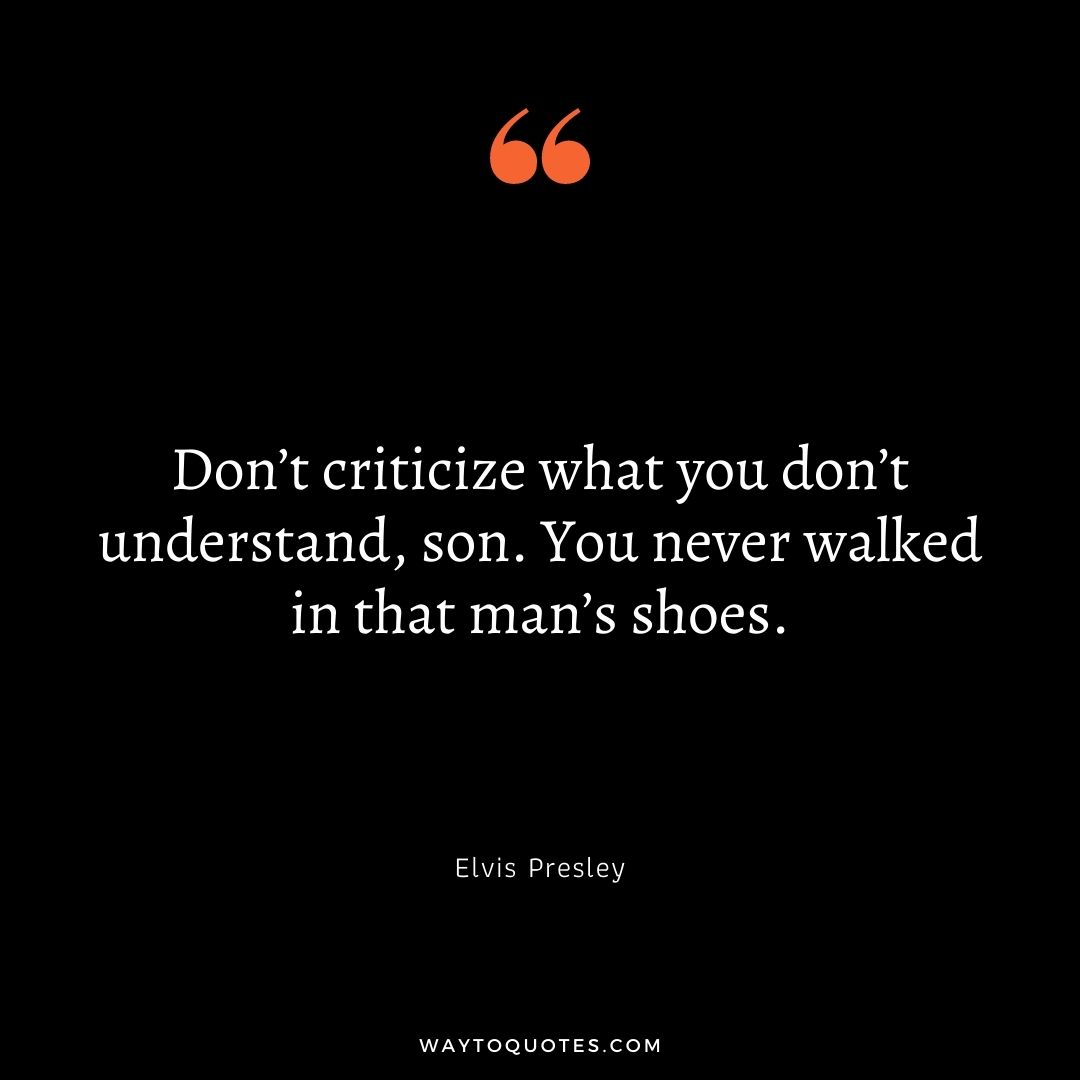 71. “Learn to see the difference between constructive and destructive criticism.” – Anonymous 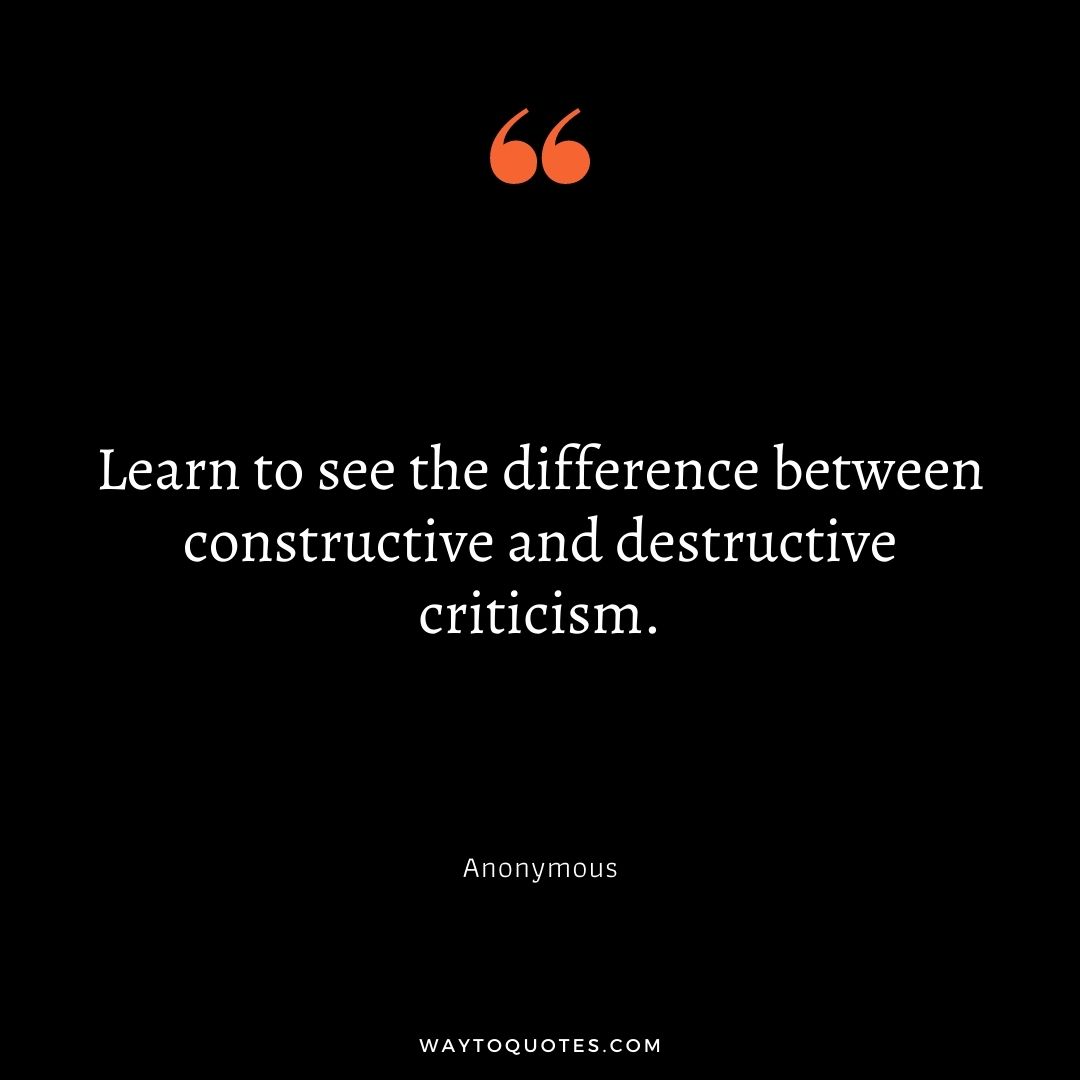 Although nobody in this world has the right to demean anyone, but we still come across some ignorant souls on our way. Fighting everyone who speaks useless stuff is not an option; it will only kill your peace of mind. Instead, assess the criticism before you react, if it is true, then improve, if it is not true, then ignore it. Grow, glow, and blossom, and your critiques will still speak but their heart will know that you are amazing.