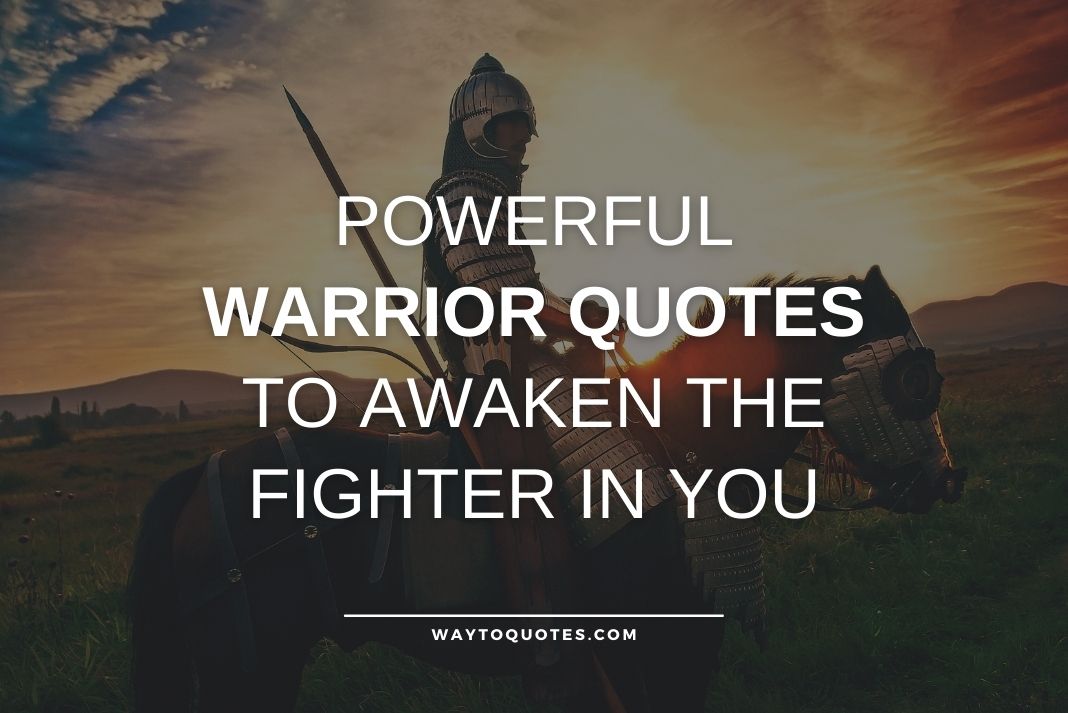 Today we have made our way out of the jungles, away from the wild, in the safe spaces of brick houses. But we were not always like this. Our ancestors were strong people. They started from living beside animals like mammoths and saber-tooth cats. Further down in the history lane, there were countless battles and wars. And each one had to fight the war, no opinions, no questions, and no options. And they fought every social and personal war and battle with valor. So never forget that we have the same genes and blood. We can do and be anything that we want. We are warriors of our lives. So here are some empowering Warrior Quotes and Sayings for you to unleash the power in you.

Who is a warrior?

A warrior is not someone who wins every battle every time. Instead, he is someone who is never scared of tough battles, so the one who has the courage to face and fight difficulties in life is a warrior.

Always remember, a tough battle fought but lost is still something to be proud of. You were still better than someone who did not even try. So fight every battle from difficulties and adversities with these best Warrior Quotes and Sayings that will give you courage:

“Every victorious warrior draws his strength from the highest source; his love.” – Tapan Ghosh

“Warriors want a worthy opponent. There is no redress in fighting the pathetic.” – Donna Lynn Hope

“The successful warrior is the average man, with laser-like focus.” – Bruce Lee

“A warrior does not give up what he loves, he finds the love in what he does.” – Dan Millman

“One by one she slew her fears, and then planted a flower garden over their graves.” – John Mark Green 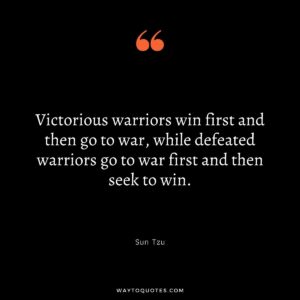 “I know what I’m capable of; I am a soldier now, a warrior. I am someone to fear, not hunt.” – Pittacus Lore

“A warrior never worries about his fear.” – Carlos Castaneda

“A warrior has to believe, for belief is an essential part of his being.” – Theun Mares

“Life can sometimes get the best of you but your state of mind determines your outcome.” – Sanjo Jendayi

“I’m a warrior for the middle class.” -Barack Obama

“The true soldier fights not because he hates what is in front of him, but because he loves what is behind him.” – G.K. Chesterton

“The warrior stands, ready to defend, ready to fight for those he serves. He is a warrior of virtue, A knight of conscience. He is who we all wish to be.” -Anthony T. Hincks

“There is no greater warrior than a mother protecting her child.” – N. K. Jemisin

“Victory is reserved for those who are willing to pay its price.” – Sun Tzu

“He who conquers himself is the mightiest warrior.” – Confucius

“Do not pray for an easy life, pray for the strength to endure a difficult one.” – Bruce Lee

“The bravest warriors know when to retreat.” – Maureen Joyce Connolly

“Every single girl, whether we want to recognize it or not, is a warrior.” – Marjorie Liu

“It is not enough to win a war; it is more important to organize the peace.” – Aristotle

“A warrior has to believe, otherwise, he cannot activate his intent positively.” – Theun Mares 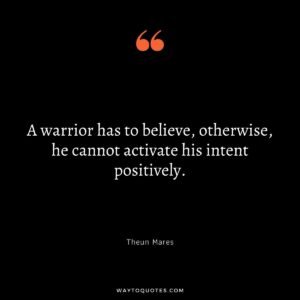 “To be a warrior is to learn to be genuine in every moment of your life.” – Chogyam Trungpa

“A warrior seeks to act rather than talk.” – Carlos Castaneda

“I’m a warrior when it comes to pursuing roles.” – Daniel Day-Lewis

“A warrior must only take care that his spirit is never broken.” – Shissai 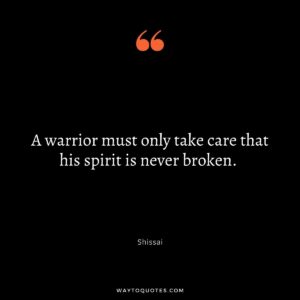 “The more you sweat in training, the less you will bleed in battle.” – Motto of Navy Seals

“A warrior accepts the challenges of life in true humility. No matter what his destiny may be, it can never be a cause for discontent, but a living challenge which it is his privilege to surmount.” – Theun Mares

“Our greatest glory is not in never falling, but in rising every time we fall.” – Confucius

“If you’re a true warrior, competition doesn’t scare you. It makes you better.” – Andrew Whitworth 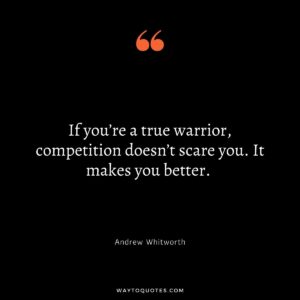 “Every great warrior must learn to endure and overcome the adversities of life.” – Lailah Gifty Akita

“Go to the battlefield firmly confident of victory and you will come home with no wounds whatsoever.” – Uesugi Kenshin

“The only thing a warrior cannot fight is her own fierce nature.” – Bianca Marais

“The two most powerful warriors are patience and time.” – Leo Tolstoy

“All men are warriors. And life for everything in our universe is nothing but war.” – David Zindell 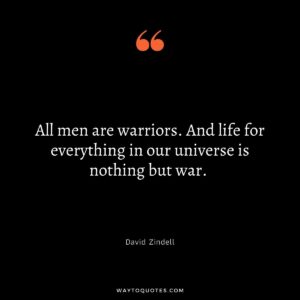 “We chose whether to be warriors or to be ordinary.” – Carlos Castaneda

“Never forget about your inner warrior; sometimes she’s all you have.” – Mozelle Barr Martin

“A warrior with a cause is the most dangerous soldier of all.” – Michael Scott

“The warrior must never get angry in war.” – Lailah Gifty Akita

“Any great warrior is also a scholar, and a poet, and an artist.” – Steven Seaga

“Ideas are the great warriors of the world, and a war that has no idea behind it is simply a brutality.” – James A. Garfield

“He who conquers himself is the mightiest warrior.” – Confucius

“Courage, above all things, is the first quality of a warrior.” – Karl von Clausewitz

“Within every woman exists a warrior. Really.” – Jessica Bennett

“Warriors do not win victories by beating their heads against walls, but by overtaking the walls. Warriors jump over walls; they don’t demolish them.” – Carlos Castaneda

“The path of the Warrior is lifelong, and mastery is often simply staying on the path.” – Richard Strozzi-Heckler

“I was on the path of the warrior, when I realized I was the warrior.” – Neetal Parekh

“What you think of me does not change who I am.” – Lailah Gifty Akita

“The warrior guided by the spirit serves humanity, the warrior without, serves the ego.” – Soke Behzad Ahmadi

“Consider your goal like a war to win and use whatever strategies you know to win.” – Bangambiki Habyarimana

“Protecting yourself is self-defense. Protecting others is warriorship.” – Bohdi Sanders

“With a blade at your throat, a well-connected uncle or a wealthy mother could not save you. Only you could save yourself.” – Natalia Marx

“Take a chance and risk it all or play it safe and suffer defeat.” – Pittacus Lore

“You’re the hunter, the warrior. You’re stronger than anyone else here, that’s your tragedy.” – Anne Rice 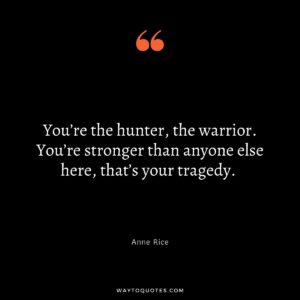 “The true warrior isn’t immune to fear. She fights in spite of it.” – Francesca Lia Block

“Cowards hide […] but warriors lie and wait […] the only difference is whether you’re motivated by fear or purpose.” – Neal Shusterman

“Be the hero of your children’s story. Never let them believe for a minute that honor, courage and doing what is right is only reserved for other fathers and mothers.” – Shannon L. Alder

“A Warrior of Light does not postpone making decisions.” – Paulo Coelho

“Warriors train, everyone else works out.” – Lahong Guro Earles 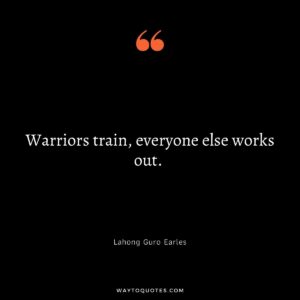 “Let your plans be dark and as impenetrable as night, and when you move, fall like a thunderbolt.” – Sun Tzu

“Every man should lose a battle in his youth, so he does not lose a war when he is old.” – George R.R. Martin

“The truth cuts like the sharpest knife I’ve ever known.” – Tomi Adeyemi

“When one has nothing to lose, one becomes courageous. We are timid only when there is something we can still cling to.” – Don Juan

“May the Warrior grant me a smooth course and a quick victory.” – George R.R. Martin 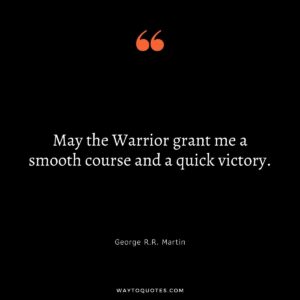 “I am a warrior! he snapped. Beyond that, who I am depends on who you want me to be.” – Dan Millman

“In times like these, we must be warriors.” – Bethany Stahl

“The ultimate way to fight is to seem not to fight all.” – Bangambiki Habyarimana

“The warrior knows the worth of the wilderness.” – Lailah Gifty Akita 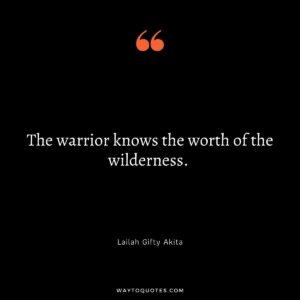 “We sleep safe in our beds because rough men stand ready in the night to visit violence on those who would do us harm.” – George Orwell

“Winning is not everything, but wanting to win is.” – Vince Lombardi 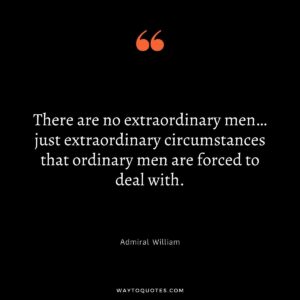 “Do not regret a mistake in training. A mistake that is understood and can be corrected is worth more than any effortless perfection.” – Tagaturo Klement

“Nothing can resist a human will that will stake its very existence on its purpose.” – Benjamin Disraeli

A war not fought is a war lost; similarly, when you run away from difficult times, you are as good as lost to the difficulties. So if you are going to lose, then lose while trying and fighting like a warrior, it will make you proud and strong. So be the warrior you are and be proud.