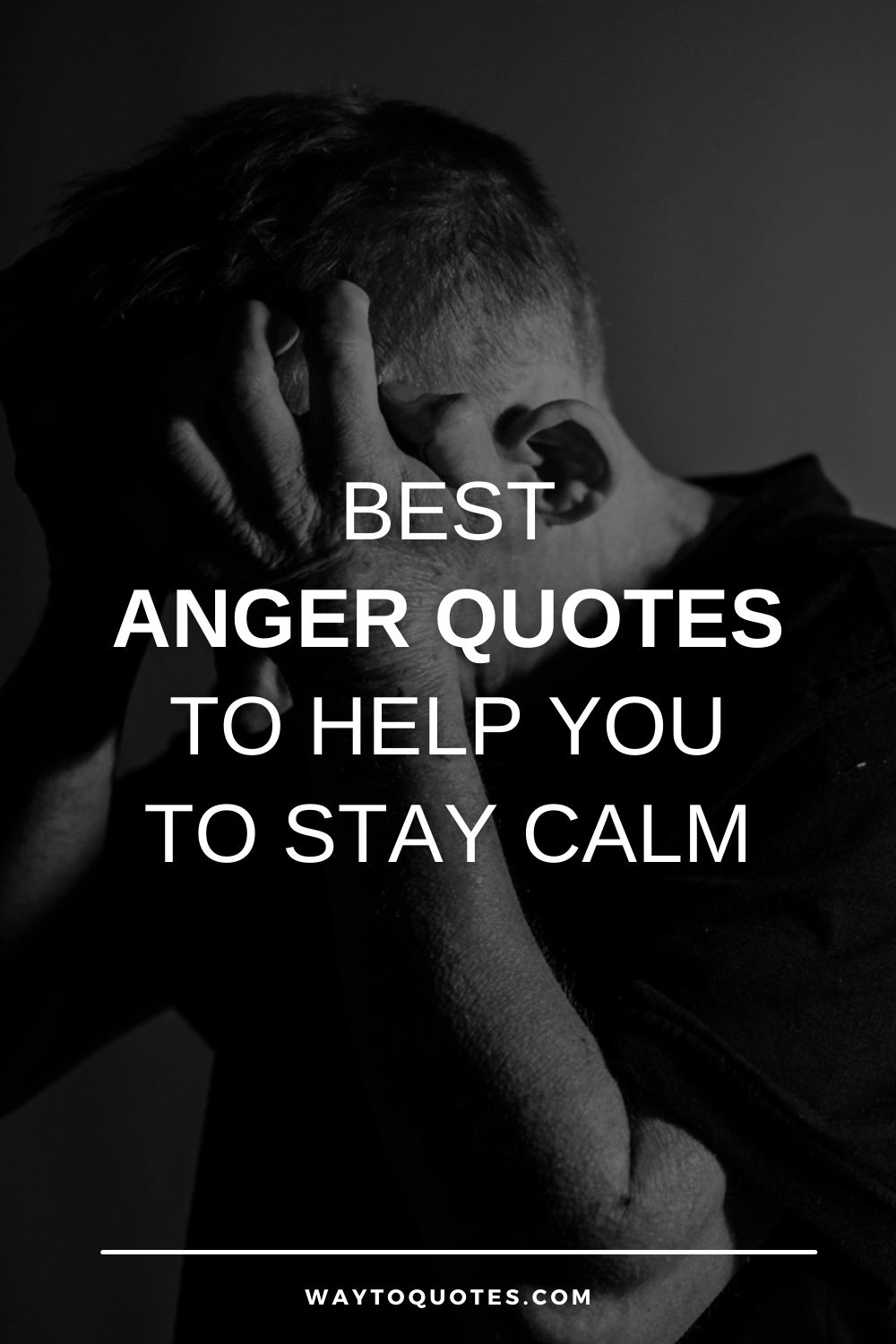 Some emotions are powerful than other emotions and one such emotion that has the capacity to have a huge impact on you is your anger. It is nothing but gloomy, destructive, and negative but powerful emotion. And the more is the intensity of a negative emotion, the more harm it will do to you, your life, and your people. But humans rarely tend to have any control on strong human emotions. And similarly, anger is a state of a person’s mind that can seem hard to control. So here we have brought the best collection of Anger Quotes to help you to conquer your anger step by step.

Why is anger harmful?

Moderate and short-lived angry moments are normal. But when your anger seems to go out of your hands and is prolonged, you lose your peace of mind. It does not only degrade your mental but physical health too, which in turn damages your social ties and professional performance.

How to control anger?

There are many ways in which you can limit the anger and claim your peace of mind back. It can be through meditation, counseling, etc. Everyone is different so everyone is supposed to have their own way of dealing with anger. Try to find your, take help if needed.

So here we have brought some Anger Quotes that you can look up to in your journey of anger management:

1. Anger is never without a reason, but seldom with a good one. – Benjamin Franklin’s

2. Bitterness is like cancer. It eats upon the host. But anger is like fire. It burns it all clean. – Angelou

3. Hatred is an affair of the heart; contempt that of the head. – Schopenhauer

4. How much more grievous are the consequences of anger than the causes of it. – Aurelius

5. It is impossible for you to be angry and laugh at the same time. Anger and laughter are mutually exclusive and you have the power to choose either. – Dyer 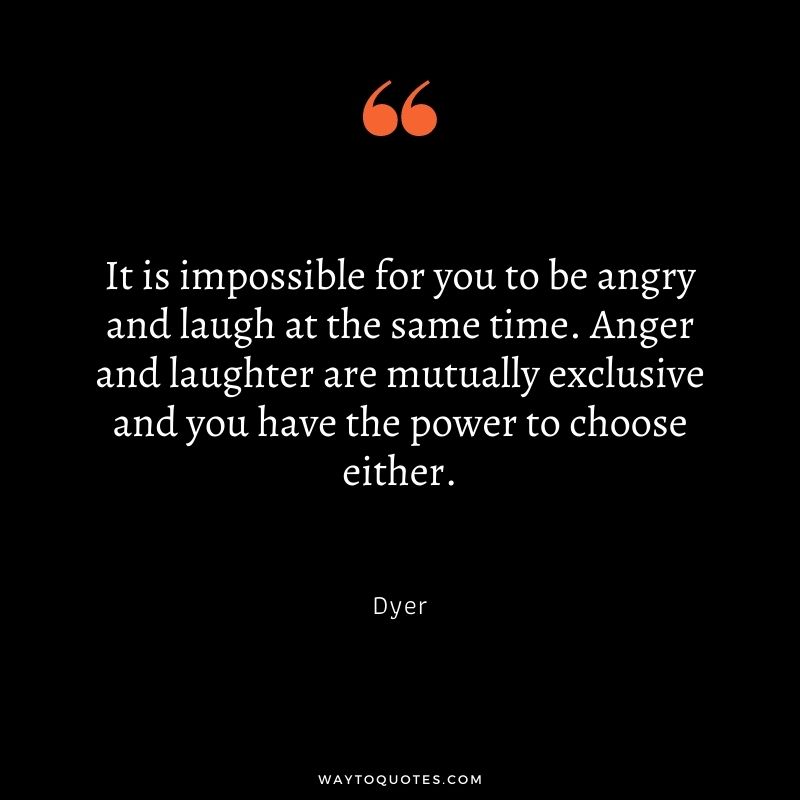 8. The more anger towards the past you carry in your heart, the less capable you are of loving in the present. – Barbara De Angelis

10. A quarrelsome man has no good neighbours. – Benjamin Franklin

11. Anger is often more hurtful than the injury that caused it.

12. Anger is a wind which blows out the lamp of the mind. – Robert Green Ingersoll

13. Where there is anger, there is always pain underneath. – Eckhart Tolle

14. Anger makes you smaller, while forgiveness forces you to grow beyond what you are. – Cherie Carter-Scott

15. Bitterness is like cancer. It eats upon the host. But anger is like fire. It burns it all clean. – Maya Angelou

16. Holding on to anger is like grasping a hot coal with the intent of throwing it at someone else; you are the one who gets burned. – Buddha

17. A man can’t eat anger for breakfast and sleep with it at night and not suffer damage to his soul. – Garrison Keillor

18. Anger dwells only in the bosom of fools. – Albert Einstein

19. Do not teach your children never to be angry; teach them how to be angry. – Lyman Abbott 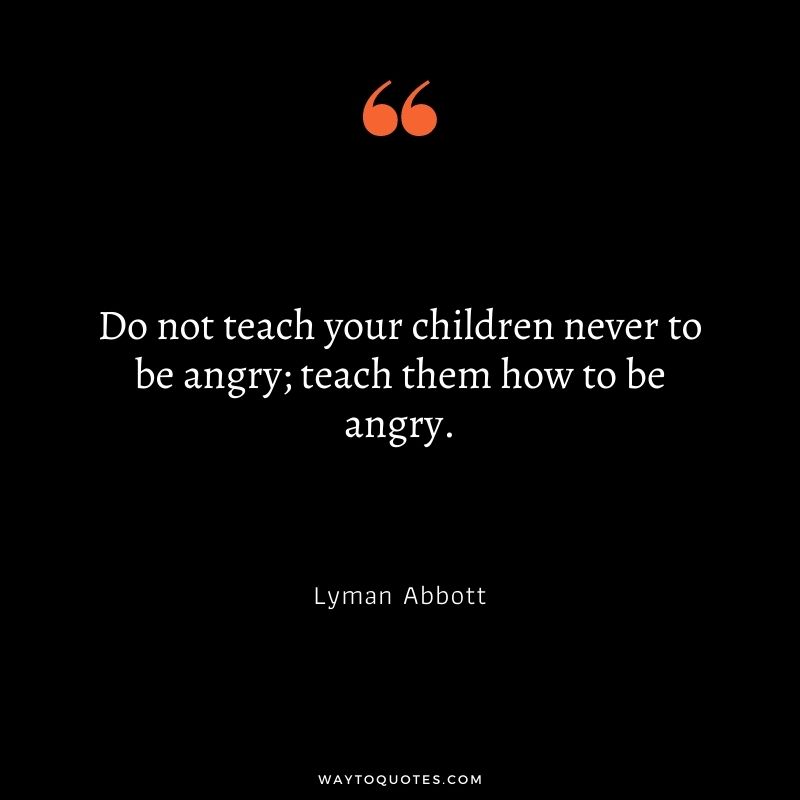 20. Never contend with a man who has nothing to lose. – Baltasar Gracian

21. Man should forget his anger before he lies down to sleep. – Gandhi

22. There’s nothing wrong with anger provided you use it constructively. – Dyer

24. If you kick a stone in anger you will hurt your foot. – Korean 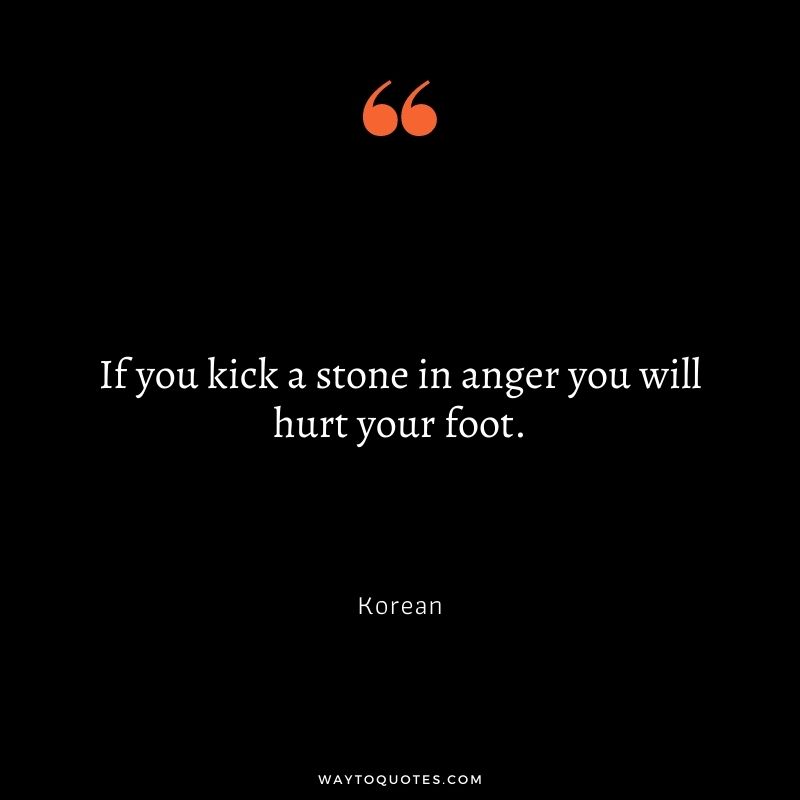 25. If you are patient in one moment of anger, you will escape a hundred days of sorrow. – Chinese Proverb

26. Speak when you are angry and you will make the best speech you will ever regret. – Bierce

27. Never do anything when you are in a temper, for you will do everything wrong. – Gracian

28. Whatever is begun in anger ends in shame. – Franklin

29. When angry count to ten before you speak. If very angry, count to one hundred. – Jefferson 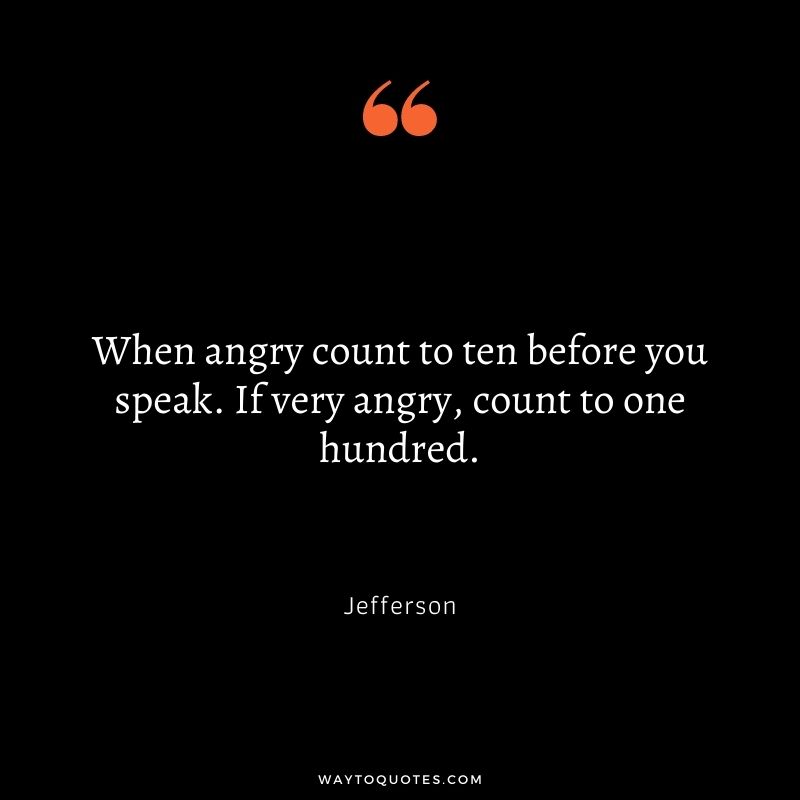 30. One should not lose one’s temper unless one is certain of getting more and more angry to the end. – Gracian

31. It is so great to love, but hell when you are hurt. – Gabeth Williams

32. Love is like the story of Frankenstein. You love the creation of your love until it turns against you then all you want to do is kill it. – Martin Shows

33. Love is like a bubblegum, juicy and sweet at first chew. But when you get hurt it turns tasteless and you want to spit it out. – Jennifer Short 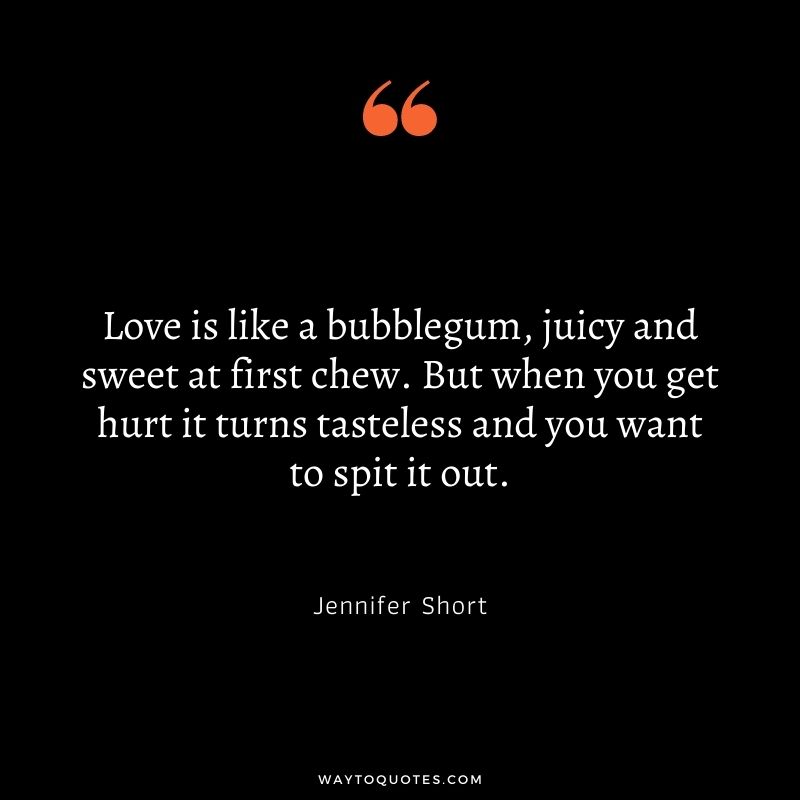 35. Trust is very important in a relationship. It is like a glass that when it is broken you cannot put it back. – Sylvester Livingston

36. Do not waste yourself in rejection; do not bark against the bad, but chant the beauty of the good. – Ralph Waldo Emerson

37. Love is the life of our heart. According to it, we desire, rejoice, hope and despair, fear, take heart, hate, avoid things, feel sad, grow angry, and exult. – Anonymous

38. Loneliness and the feeling of being unwanted is the most terrible. – Mother Teresa

39. You may not realize it when it happens, but a kick in the teeth may be the best thing in the world for you. – Walt Disney

40. Anger dwells only in the bosom of fools. – Albert Einstein

41. Only when a mosquito lands on your testicles, will you truly learn that there is always a way to solve problems without using anger and violence. – Confucius

42. The best remedy for a short temper is a long walk. – Joseph Joubert

43. A moment of patience in a moment of anger saves you a hundred moments of regret.

45. One that angers you controls you. Don’t give anyone that power! Especially the one who does it intentionally.

46. Speak when you are angry and you’ll make the best speech you’ll ever regret. – Ambrose Brierce

47. For every minute you are angry, you lose 60 seconds of happiness. 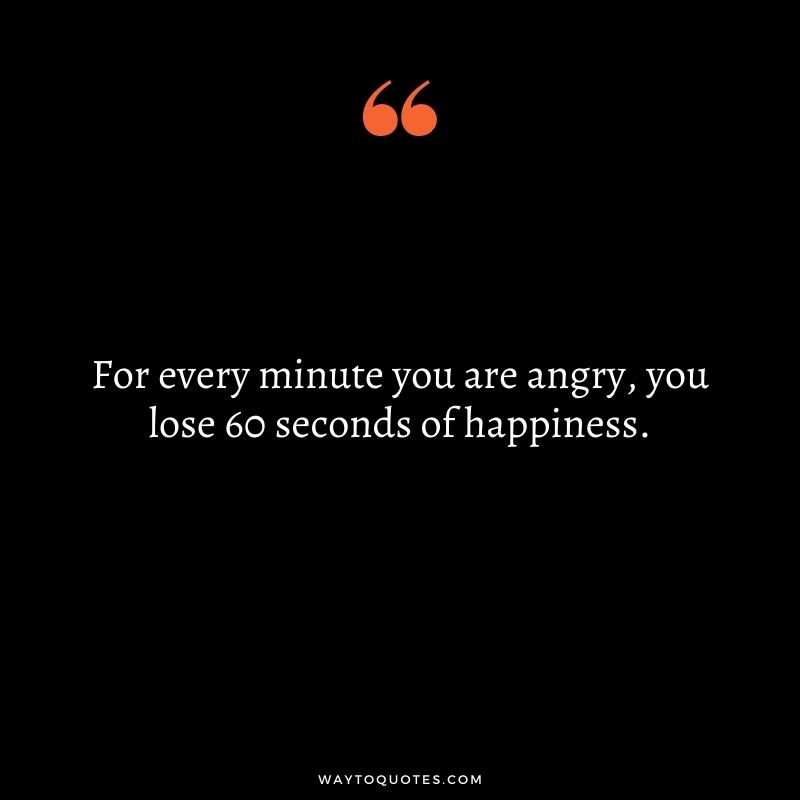 48. Holding onto anger is like drinking poison and expecting the other person to die. – Buddha

49. Holding on to anger is like grasping a hot coal with the intend of throwing it at someone else; you are the one who gets burned. – Buddha

50. Anger doesn’t solve anything. It builds nothing, but it can destroy everything.

51. Forgive people in your life, even those who are not sorry for their actions. Holding on to anger only hurts, not them.

52. Don’t let yourself get so angry that you stop loving, because one day you will wake up from that anger and the person you love won’t be around anymore. – Dawson’s Creek

53. Give yourself permission to feel anger, pain, and resentment. Relax, then let it go with love.

54. Nobody makes you angry by speaking the truth, only you decided to use anger as a response.

56. Control your anger, it’s only one letter away from danger.

58. Be careful with your words when you are angry, they can be only forgiven, not forgotten

60. A quick temper will make a fool of you soon enough. – Bruce Lee

Everything is ok in moderation. The moment things start to get out of hands is the time when you need to buck up. Anger does no good to anyone. Instead learn to analyze and mend situations. That will be great for you in the external world and for your internal world too.