Are you here because you want to see stars on earth? Then first go ahead and Google if it is legal in your state and then we will talk about the rest, well I am kidding, or am I, who knows? But reading is legal in all the states so crush your stuff, get a blunt, roll or joint, whatever you call it, and read ahead to find the coolest Weed Quotes and Sayings for the humble stoner in you and get high on words, also pass these quotes to a homie as you would have passed the joint.

What state is the best state in the world? The high state. Being high not only slows down the world for you but it also makes you calm. It makes you leave behind the miseries of your life for some time and you might actually come out of your high state with a solution.

So enjoy being high on things that you love with weed and these Smoking Weed Quotes and Sayings that you will relate to 100 percent because all stoners are brothers and sisters in disguise:

1. “I find it quite ironic that the most dangerous thing about weed is getting caught with it.” – Bill Murray

3. “If you want to smoke marijuana in your basement, I don’t care! I’m not going to get a search warrant and kick your door in. I think that’s foolish.” – Bill O’Reilly

5. “The only serious side-effect of marijuana is that you might get arrested.” – Alan Watts 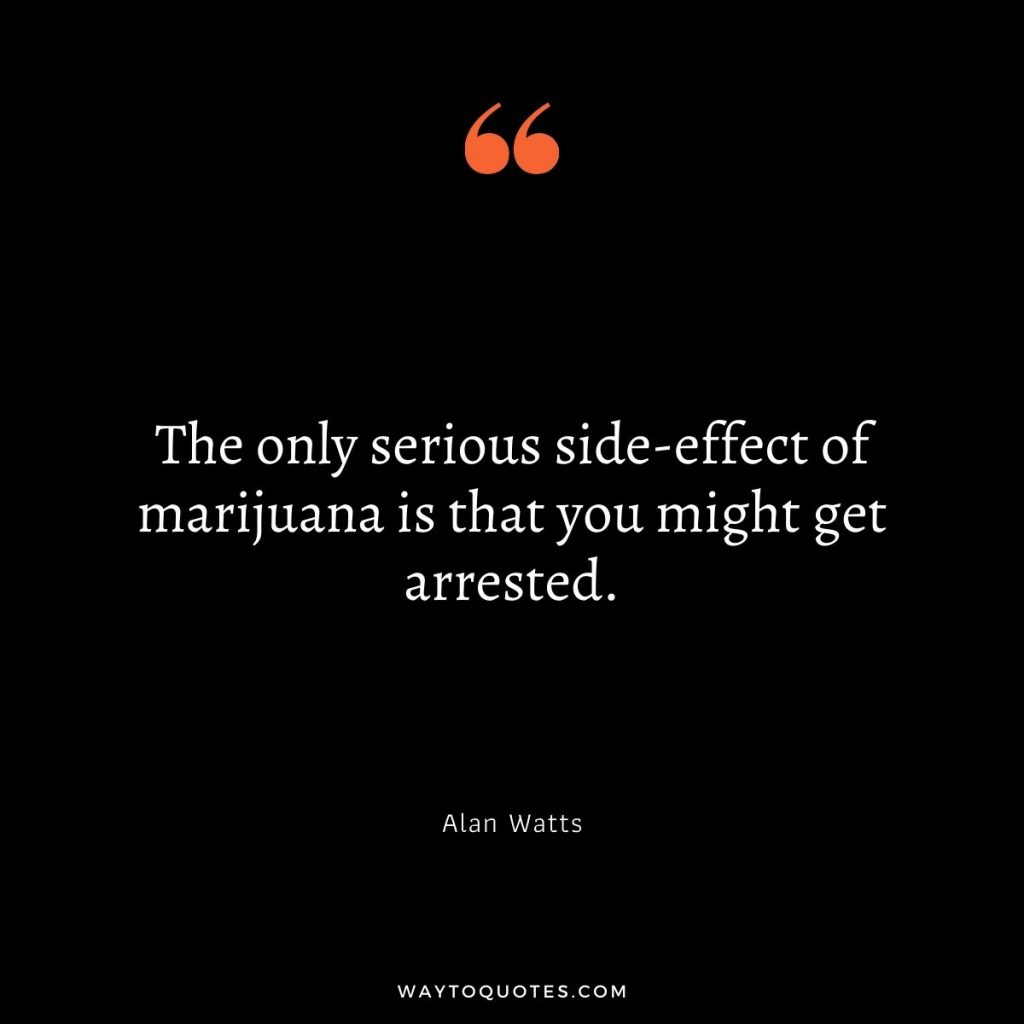 6. “They’ve outlawed the No. 1 vegetable on the planet.” – Timothy Leary

7. “To make marijuana against the law is like saying God made a big mistake.” – Bill Hicks

8. “When you smoke the herb, it reveals you to yourself.” – Bob Marley

9. “I have always loved marijuana. It has been a source of joy and comfort to me for many years. And I still think of it as a basic staple of life, along with beer and ice and grapefruits – and millions of Americans agree with me.” – Hunter S. Thompson

10. “It really puzzles me to see marijuana connected with narcotics … dope and all that crap. It’s a thousand times better than whiskey – it’s an assistant – a friend.” – Louis Armstrong

11. “The illegality of cannabis is outrageous, an impediment to full utilization of a drug which helps produce the serenity and insight, sensitivity and fellowship so desperately needed in this increasingly mad and dangerous world.” – Carl Sagan

14. “Even if one takes every reefer madness allegation of the prohibitionists at face value, marijuana prohibition has done far more harm to far more people than marijuana ever could.” – William F. Buckley, Jr.

15. “The criminalization of marijuana did not prevent marijuana from becoming the most widely used illegal substance in the United States and many other countries. But it did result in extensive costs and negative consequences.” – George Soros

16. “Why is marijuana against the law? It grows naturally upon our planet. Doesn’t the idea of making nature against the law seem to you a bit … unnatural?” – Bill Hicks

17. “‎Some of my finest hours have been spent on my back veranda, smoking hemp and observing as far as my eye can see.” – Thomas Jefferson

18. “Is marijuana addictive? Yes, in the sense that most of the really pleasant things in life are worth endlessly repeating.” – Richard Neville

19. “I think that marijuana should not only be legal, I think it should be a cottage industry. It would be wonderful for the state of Maine. There’s some pretty good homegrown dope. I’m sure it would be even better if you could grow it with fertilizers and have greenhouses.”- Stephen King

20. “Hashish will be, indeed, for the impressions and familiar thoughts of the man, a mirror which magnifies, yet no more than a mirror.” – Charles Baudelaire 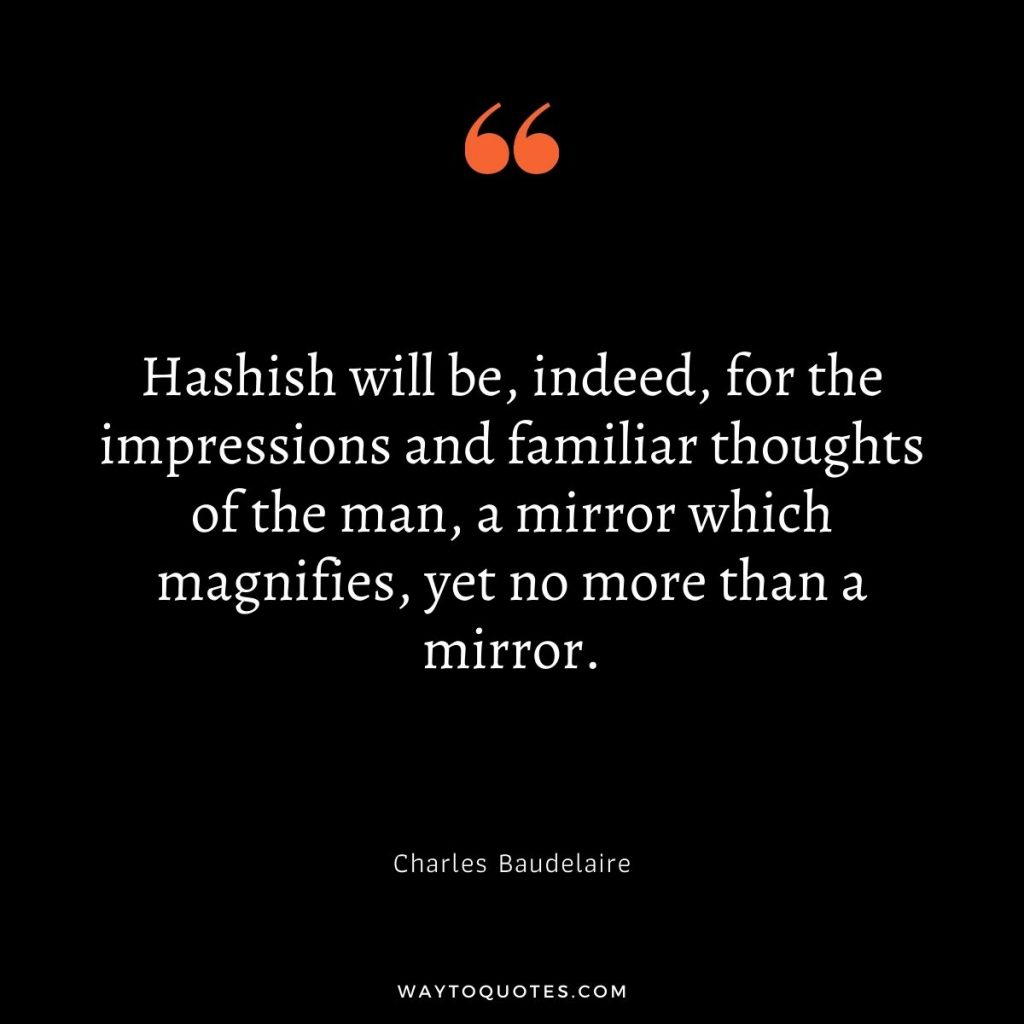 21. “I’d like to see the government back a program of research into the medical properties of cannabis and I do not object to its responsible use as a recreational relaxant.” – Sir Richard Branson

22. “I’ve been smoking marijuana for 44 years now, and … I think it’s a tremendous blessing.” – Lester Grinspoon

23. “I think people need to be educated to the fact that marijuana is not a drug. Marijuana is an herb and a flower. God put it here. If He put it here and He wants it to grow, what gives the government the right to say that God is wrong?” – Willie Nelson

24. “Marijuana saved my life. I have no doubts about it and you don’t need to show me any data.” – Greg Scott 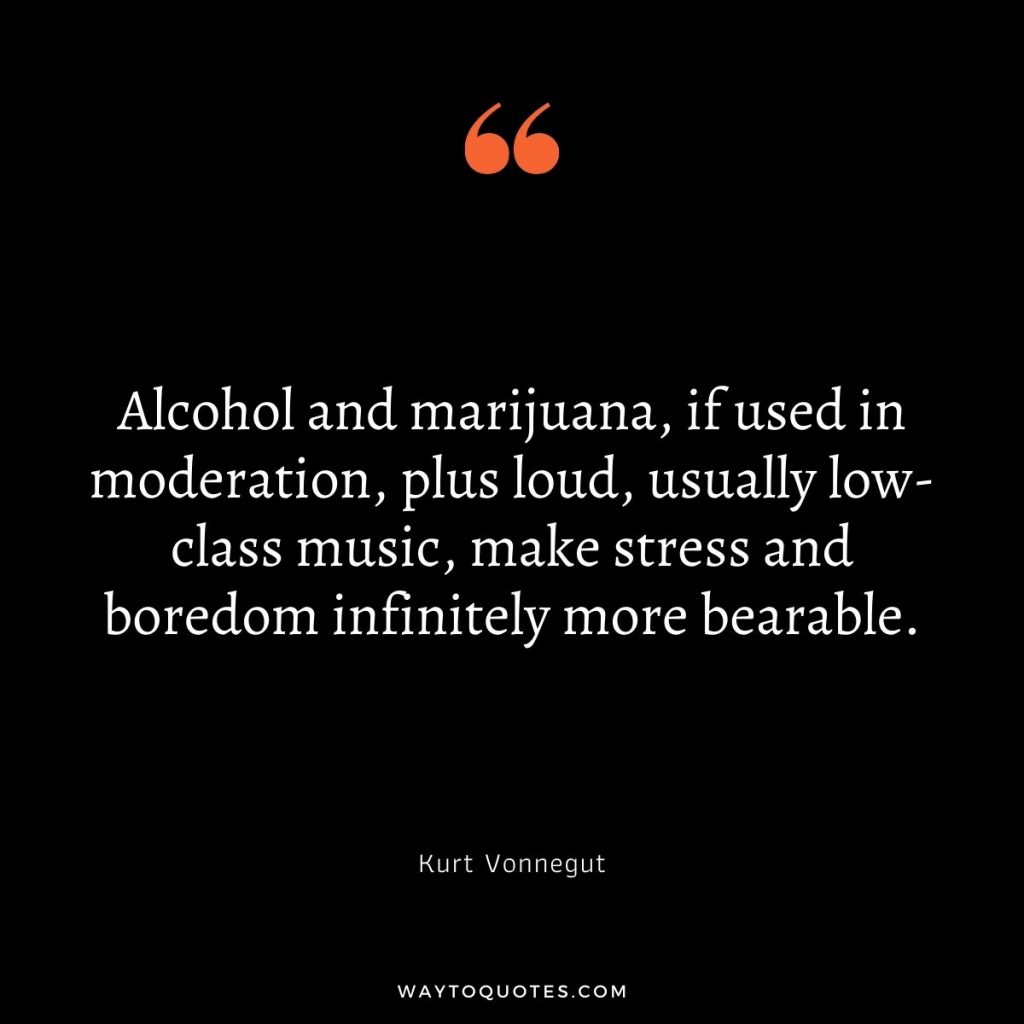 26. “By regulating marijuana, we can put black market drug dealers out of business and eliminate the rebellious allure that attracts young people.” – Sal Albanese

27. “Marijuana is quite possibly the finest of intoxicants. It has been scientifically proven, for decades, to be much less harmful to the body than alcohol when used on a regular basis (Google “Science”).” – Nick Offerman

28. “It is beyond my comprehension that any humane person would withhold such a beneficial substance from people in such great need simply because others use it for different purposes.” – Steven Gould

30. “I don’t consider weed to be any worse than having a beer.” – James Franco 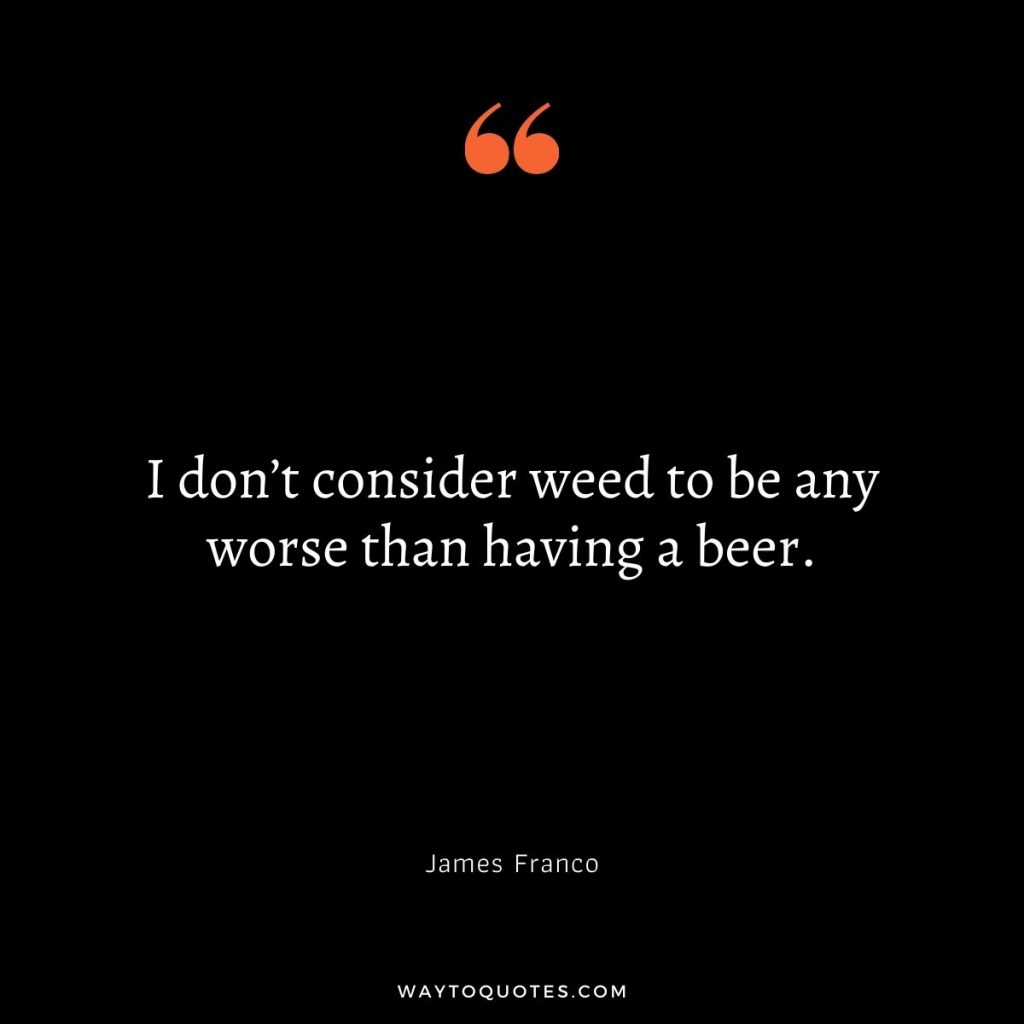 32. “A friend with weed is a friend indeed…”- Pops O’Donnell

33. “When I was a kid I inhaled frequently. That was the point.” – Barack Obama

34. “Make the most you can of the Indian Hemp seed and sow it everywhere.” – George Washington

35. “The War on Drugs will go down in history as the most racist crusade since slavery.” – Thor Benson 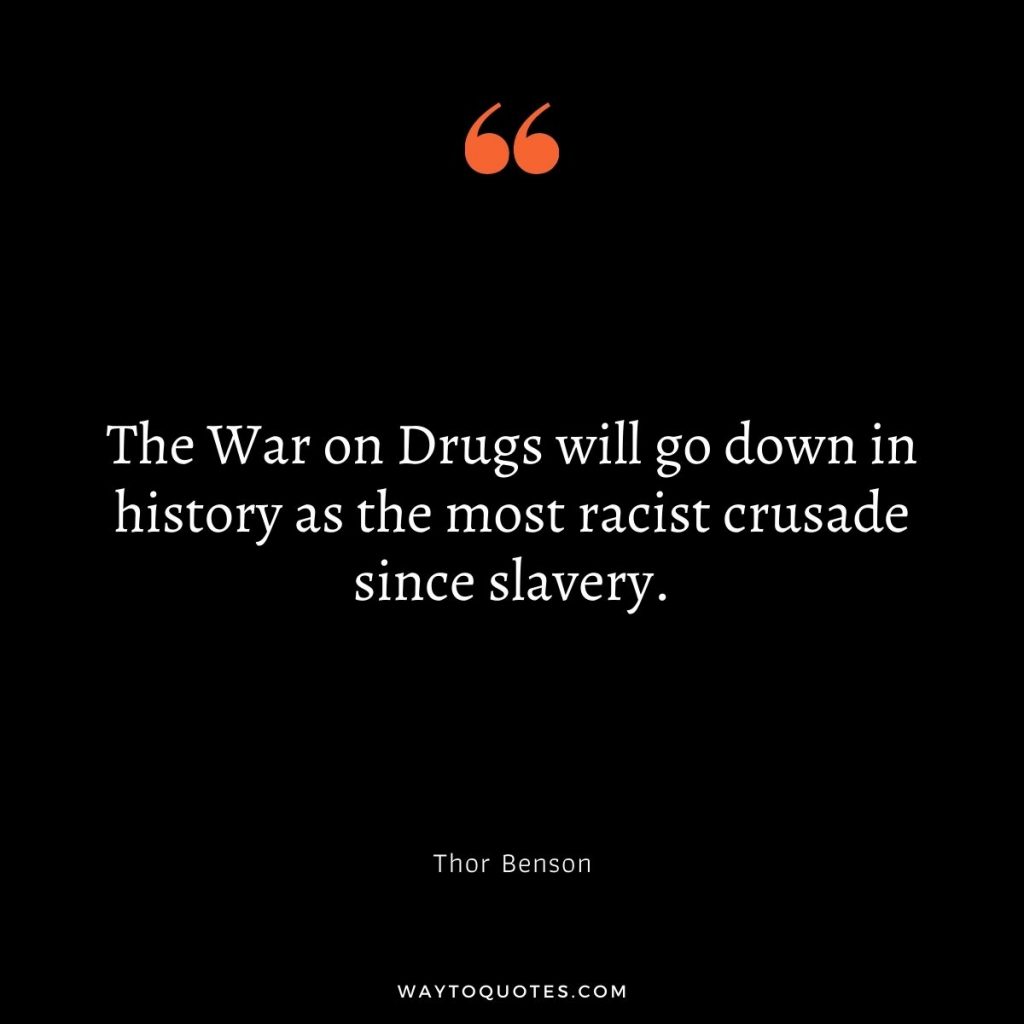 36. “Many artists and writers have used cannabis for creative stimulation – from the writers of the world’s religious masterpieces to our most irreverent satirists.” – Jack Herer

38. “Why use up the forests which were centuries in the making and the mines which required ages to lay down, if we can get the equivalent of forest and mineral products in the annual growth of the hemp fields?” – Henry Ford

41. “Writing to me is like hitting the herb. No problems, Mon. No worries.”- A.K. Kuykendall

42. “Marijuana enhances our mind in a way that enables us to take a different perspective from ‘high up’, to see and evaluate our own lives and the lives of others in a privileged way. Maybe this euphoric and elevating feeling of the ability to step outside the box and to look at life’s patterns from this high perspective is the inspiration behind the slang term ‘high’ itself.” – Sebastian Marincolo

43. “If you substitute marijuana for tobacco and alcohol, you’ll add eight to 24 years to your life.” – Jack Herer

44. [Marijuana] doesn’t have a high potential for abuse, and there are very legitimate medical applications. In fact, sometimes marijuana is the only thing that works.” – Dr. Sanjay Gupta

45. “People say you can abuse marijuana. You can abuse cheeseburgers. Does that mean we should close Burger Kings.” – Joe Rogan

46. “We talk to each other in code. We said that 420 was a special number. It was a time. It was a date. It was a symbol for what we did for passive resistance.” – Rick Cusick

48. “A man of words and not of deeds, Is like a garden full of weeds.” – Benjamin Franklin

49. “When weeds go to heaven, I suppose they will be flowers.” – L.M. Montgomery

50. “Weeds are luckier than flowers because they are not killed for their beauties!” – Mehmet Murat ildan

51. “There was no time to weigh chances. There was no such thing as chances anyway, in the distorted perspective of the weed fumes.” – Cornell Woolrich

53. “Herb is the healing of a nation, alcohol is the destruction.” – Bob Marley 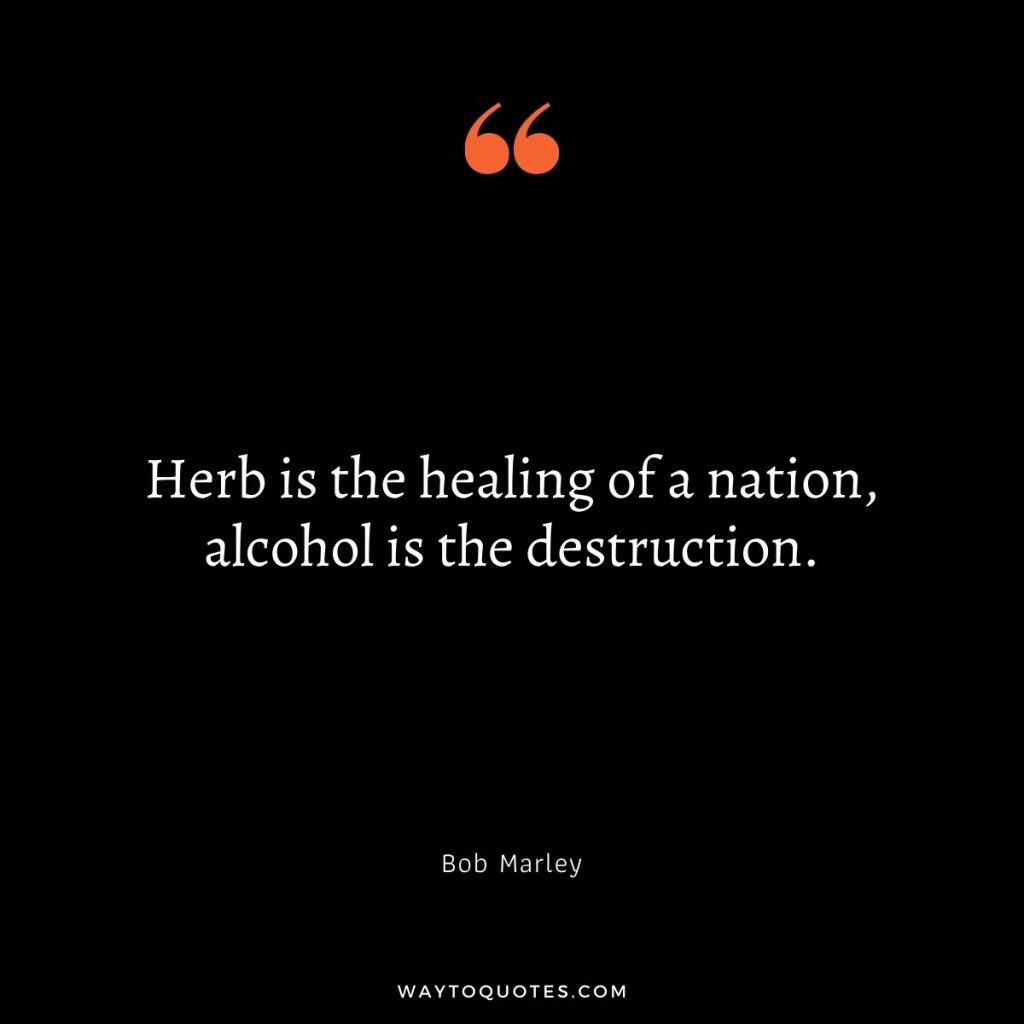 55. “You know what I’m really tired of is people getting arrested for the possession of marijuana. It’s just a plant. It makes no sense.” – Madeline Martinez

56. “Instead of taking five or six of the prescriptions, I decided to go a natural route and smoke marijuana.” – Melissa Etheridge 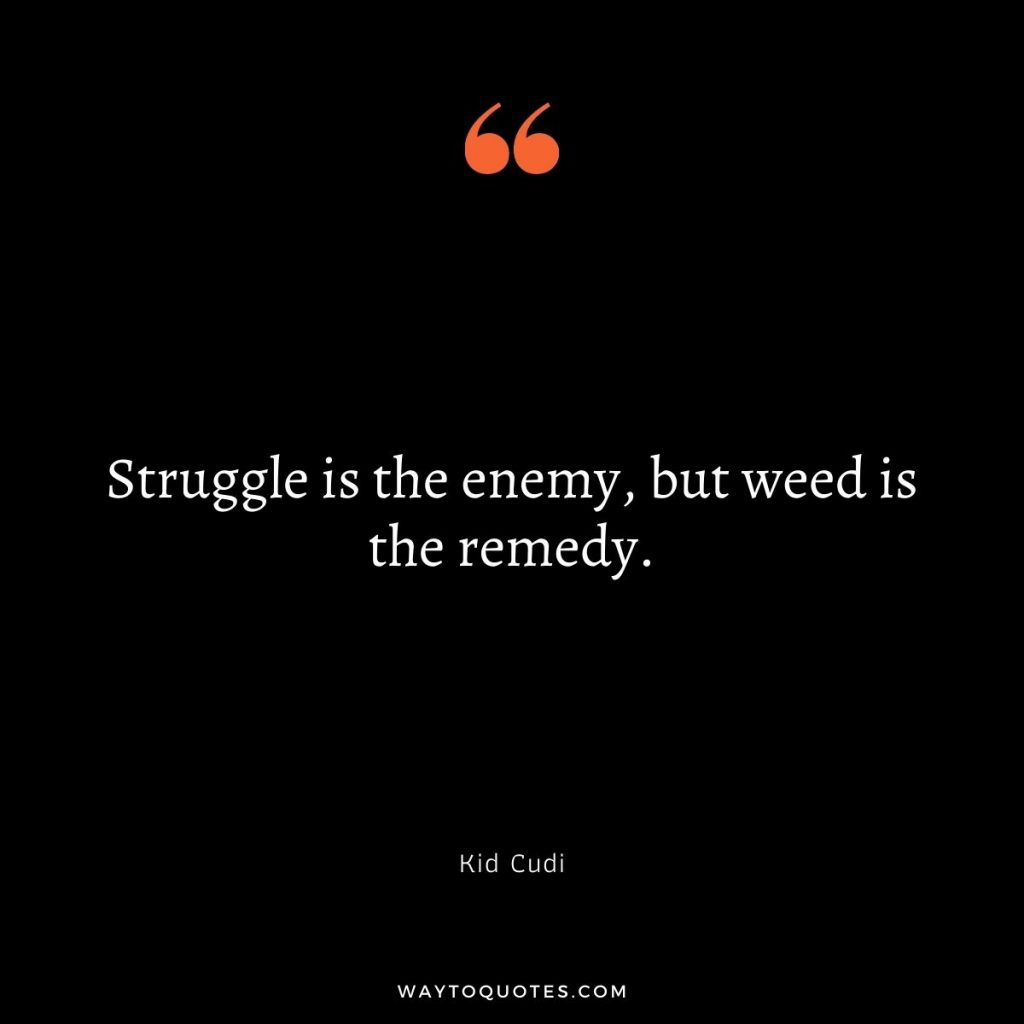 59. “When the wind likes a path, the weeds around that path will tremble all day long!” – Mehmet Murat ildan

61. “It is quite hilarious that the most perilous thing about marijuana is getting caught in its possession.”

62. “The Almighty made weed, human made beer”

64. “We had a joint last night, got so high that we started searching for our friend while he assisted us look.”

65. “Marijuana is a gift from mother nature. God gave it to us. So take this opportunity and use it. Take advantage.” 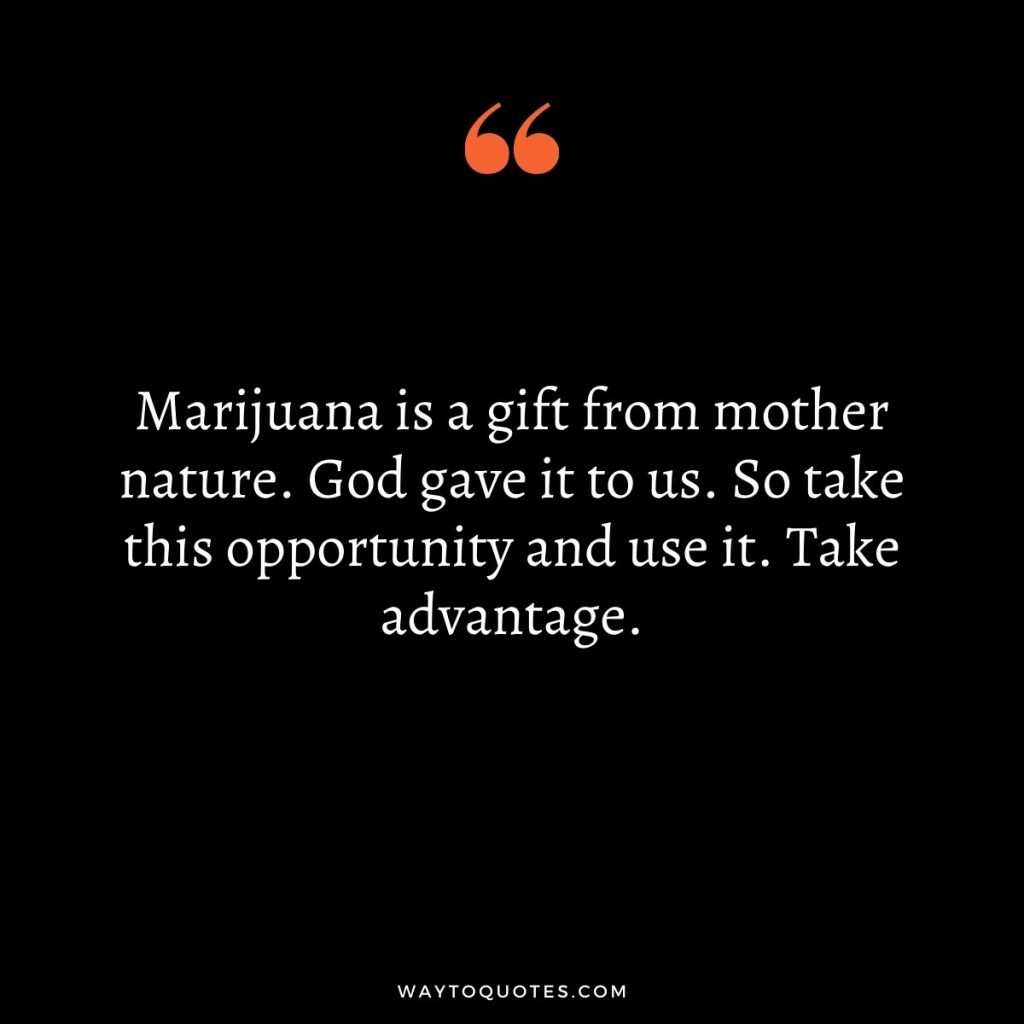 66. “I do not enjoy mathematics, but when I do, I am usually buying marijuana.”

67. “The person who said that great things are always free must have had a garden full of weed.”

68. “A whole day minus marijuana is just like a learning institution.”

69. “Being under the influence of weed the whole day without telling anyone means that your body is still 100% efficient.”

70. “To say that smoking weed is against the law is like implying that God made a mistake.”

71. “I smoked weed, got high and forgot that I was not supposed to get high.”

72. “Nothing is more pleasing to the eye like a bag of marijuana.”

74. “I beg you not to feed me with your nastiness, unless it looks like a bag of cannabis.”

76. “I am sorry, my marijuana is so loud I cannot hear your nastiness.”

77. “You realize that you are a pot addict when your pals bring you a Bob Marley cake.”

78. “I do not have to smoke a joint to have a pleasant moment, but I am always hyped when I am high.” 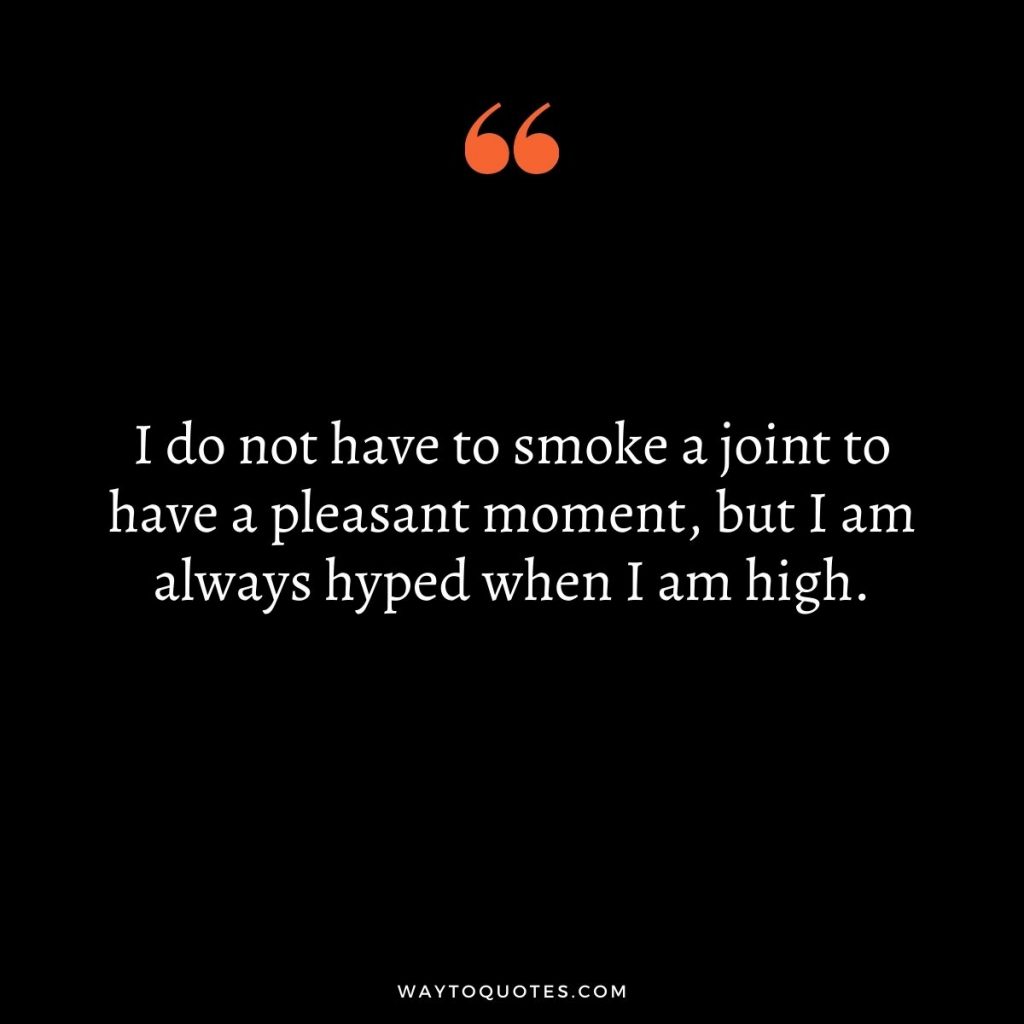 79. “I will continue smoking pot until everything makes sense or I fall asleep.”

80. “I do not have to smoke a joint to have a pleasant moment, but I am always hyped when I am high.”

Weed and hash are cannabis plants which are drug plant species that are primarily used in medical but people also smoke them which can be harmful in excess and in the long run. So be the responsible person that you are and avoid being lost mindlessly in something that can harm you. Enjoying everything in moderation with a healthy lifestyle will let you enjoy it forever. So enjoy and take care.

Best 65 Trust Quotes That Will Help You in Relationships

105 Pregnancy Quotes To Keep You Glowing For Nine Months

75 Time Management Quotes That Will Buy You Extra Hours

80 Self Inspirational Quotes to Enlighten the Power Within You

60 Hate Quotes To Unleash The Love In You

65 May Quotes for the Summer Lovers