Mothers are the epitome of selfless love, sacrifices, and compromises. A mother is not just the caretaker of her children but also the caretaker of her whole family, be it her husband, in-laws, or any other members. She can make or break a home and hence it is said that a house which respects its women becomes a home. So today we have brought the best and most lovely Mother Quotes and Sayings to try to showcase some of her efforts towards her family.

Have you ever noticed that despite there being so many people in a family, the whole mood of the home is affected by the mother’s mood? If she is happy, everything seems cheerful, if she is upset, everything seems gloomy and if she is furious, then, well we might all want to keep quiet and do the chores that we are supposed to do.

So let us look at some adorable and lovely Mother’s Quotes and Sayings and try to understand that how can someone be so gentle and yet so strict and both for our well being:

1. “It’s a funny thing about mothers and fathers. Even when their own child is the most disgusting little blister you could ever imagine, they still think that he or she is wonderful.” -Roald Dahl

2. “When you’re in the thick of raising your kids by yourself, you tend to keep a running list of everything you think you’re doing wrong. I recommend taking a lot of family pictures as evidence to the contrary.” -Connie Schultz

3. “Kids don’t stay with you if you do it right. It’s the one job where, the better you are, the more surely you won’t be needed in the long run.” -Barbara Kingsolver

4. “Mothers and their children are in a category all their own. There’s no bond so strong in the entire world. No love so instantaneous and forgiving.” -Gail Tsukiyama 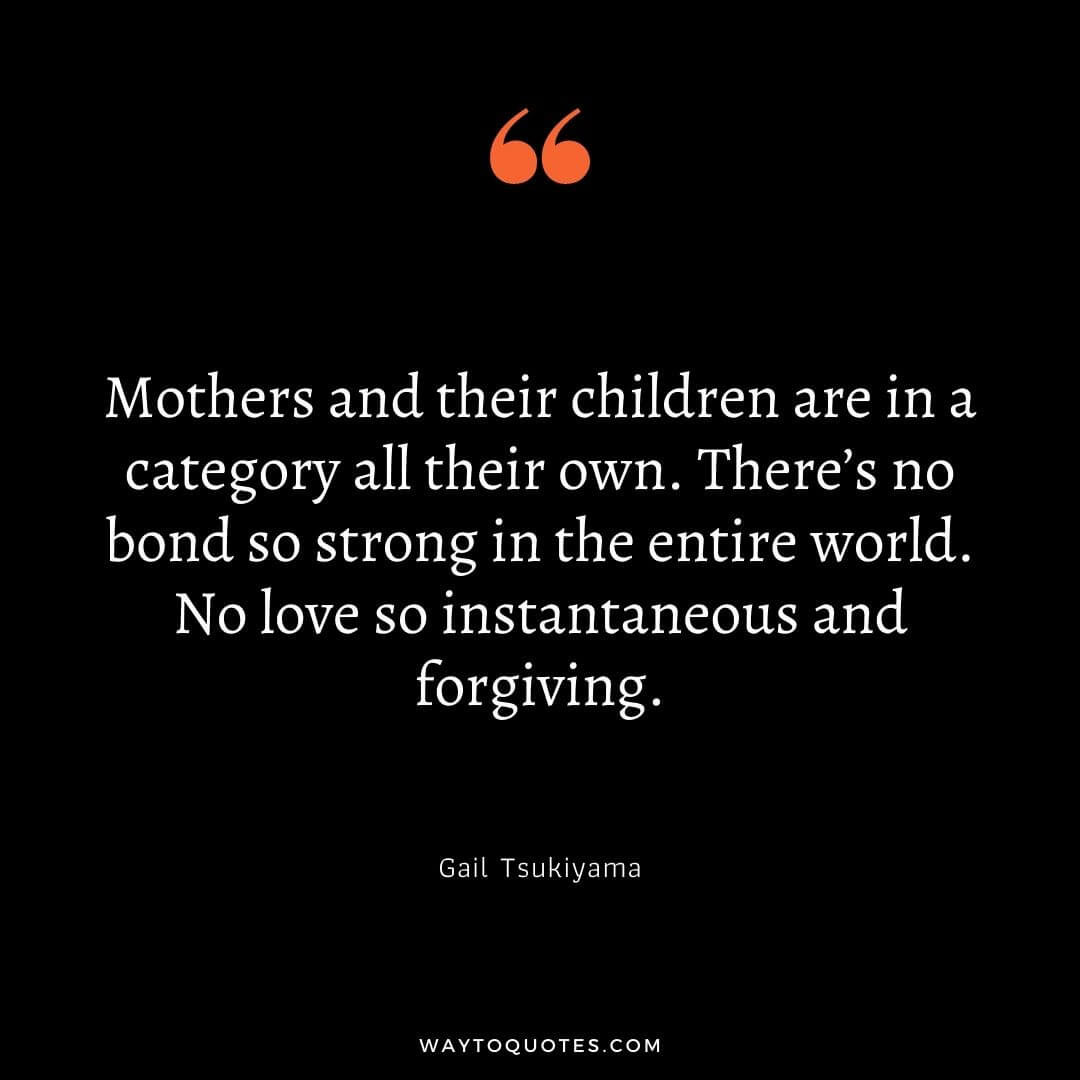 5. “All that I am or ever hope to be, I owe to my angel mother.” -Abraham Lincoln

6. “My mother has always been my emotional barometer and my guidance. I was lucky enough to get to have one woman who truly helped me through everything.” -Emma Stone

7. “I believe in the strength and intelligence and sensitivity of women. My mother, my sisters [they] are strong. My mum is a strong woman and I love her for it.” -Tom Hiddleston

8. “My mother was the most beautiful woman I ever saw. All I am I owe to my mother. I attribute my success in life to the moral, intellectual and physical education I received from her.” -George Washington

9. “Life began with waking up and loving my mother’s face.” -George Eliot

11. “Being a mother is an attitude, not a biological relation.” -Robert A. Heinlein

12. “If evolution really works, how come mothers only have two hands?” -Milton Berle 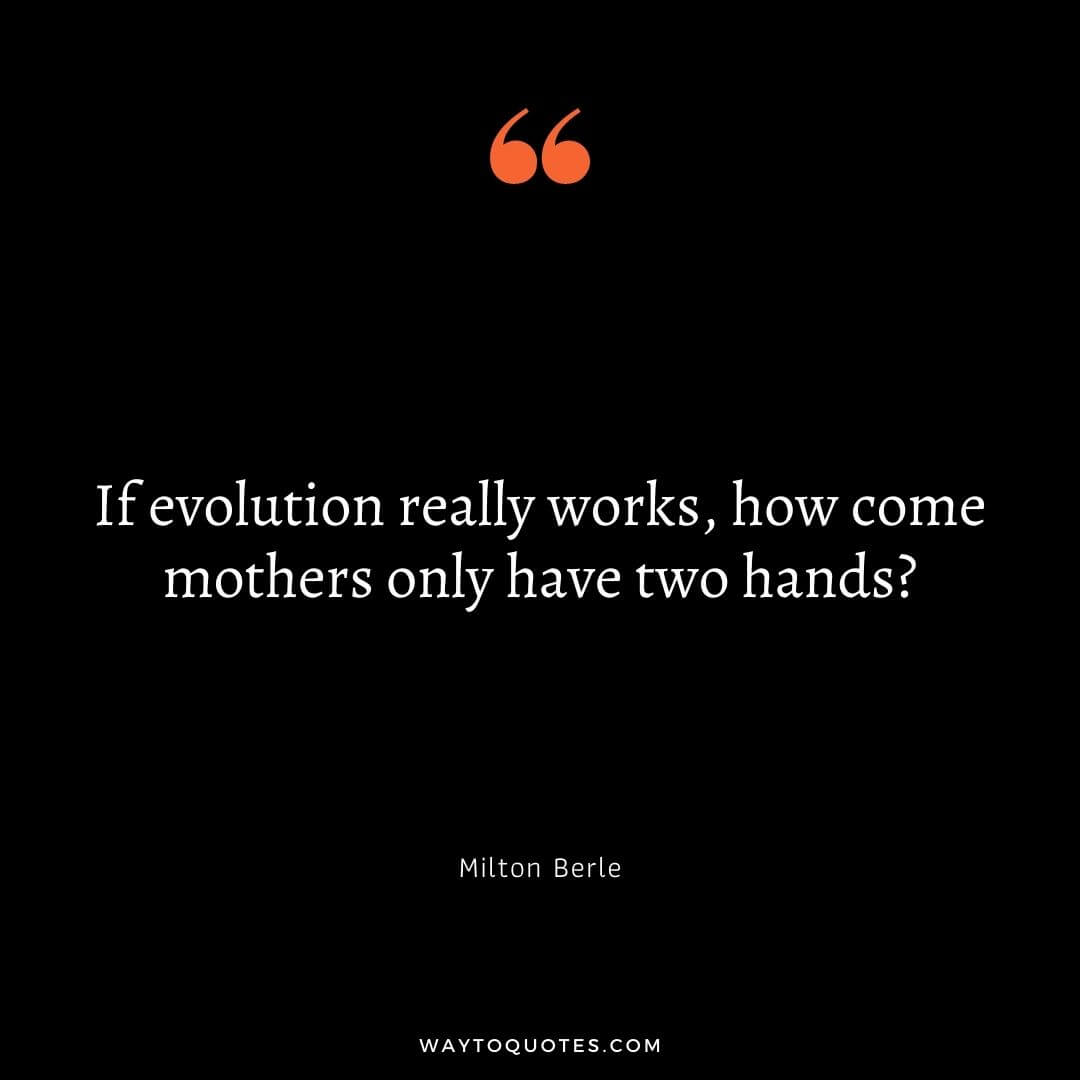 14. “To describe my mother would be to write about a hurricane in its perfect power. Or the climbing, falling colors of a rainbow.” -Maya Angelou

15. “Having children just puts the whole world into perspective. Everything else just disappears.” -Kate Winslet

16. “My mother is a walking miracle.” -Leonardo DiCaprio 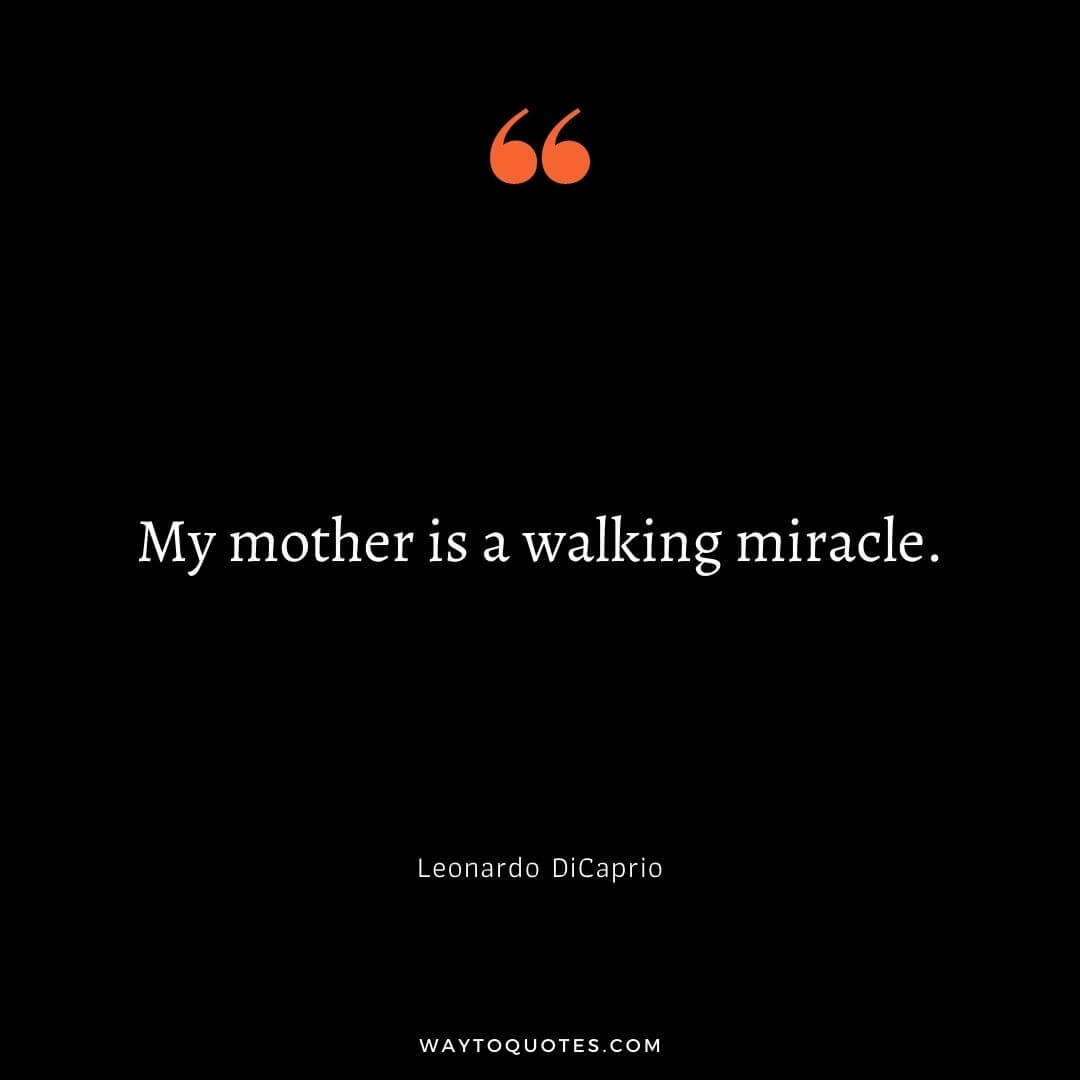 18. “The films I’ve made for children have been my hardest work, my best, because kids deserve the best.” -Emma Thompson

19. “Acceptance, tolerance, bravery, compassion. These are the things my mom taught me.” -Lady Gaga

20. “I like my body so much better after I had kids. Is that a crazy thing to say? I’m more womanly. I feel sexier.” -Reese Witherspoon 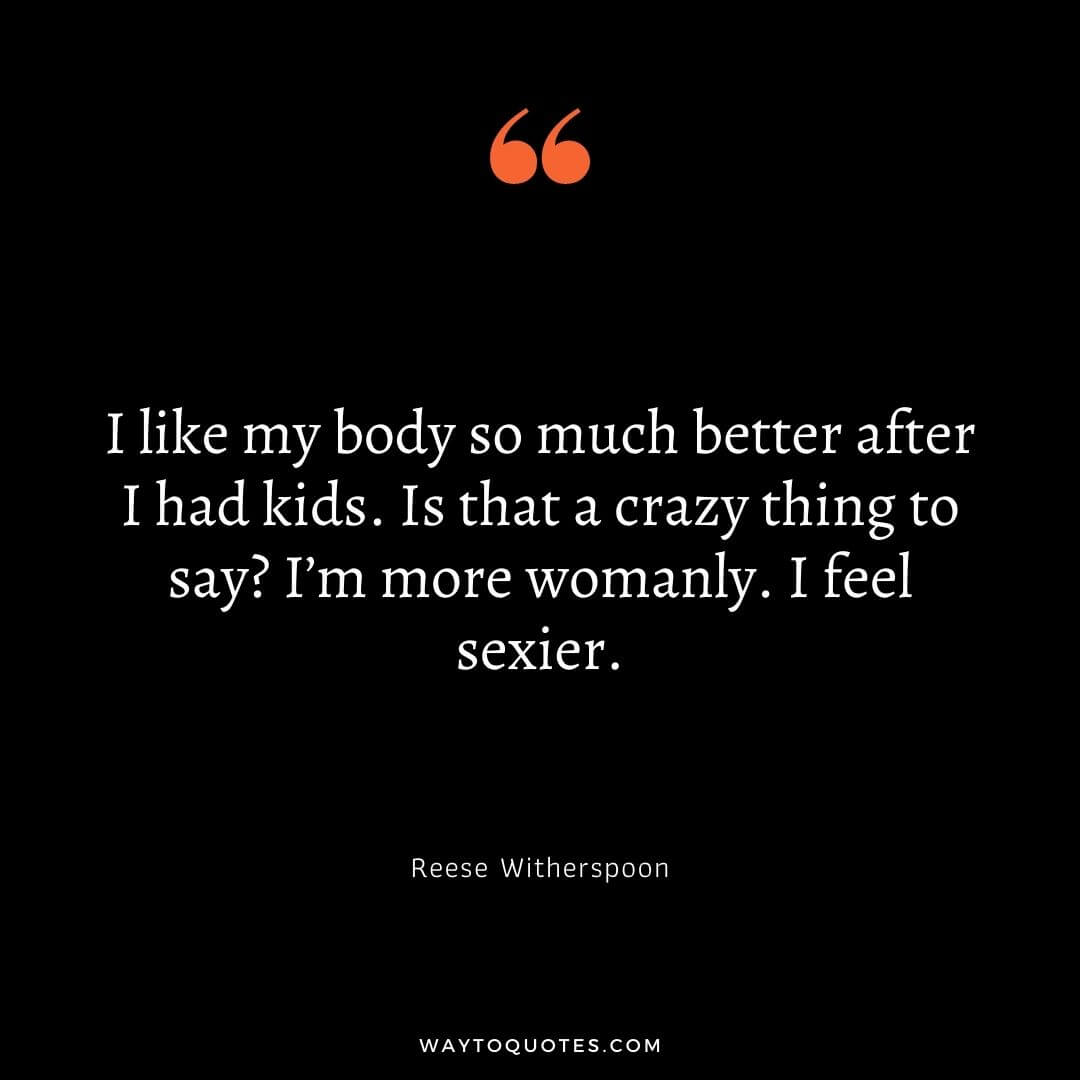 21. “A mother is she who can take the place of all others but whose place no one else can take.” -Cardinal Mermillod

22. “My mom is the greatest mom in the whole wide world. She’s done everything for me to make my dreams come true.” -Josh Hutcherson

23. “My mother is everything to me. She’s my anchor, she’s the person I go to when I need to talk to someone. She is an amazing woman.” -Demi Lovato

24. “There were times when, in middle school and junior high, I didn’t have a lot of friends. But my mom was always my friend. Always.” -Taylor Swift 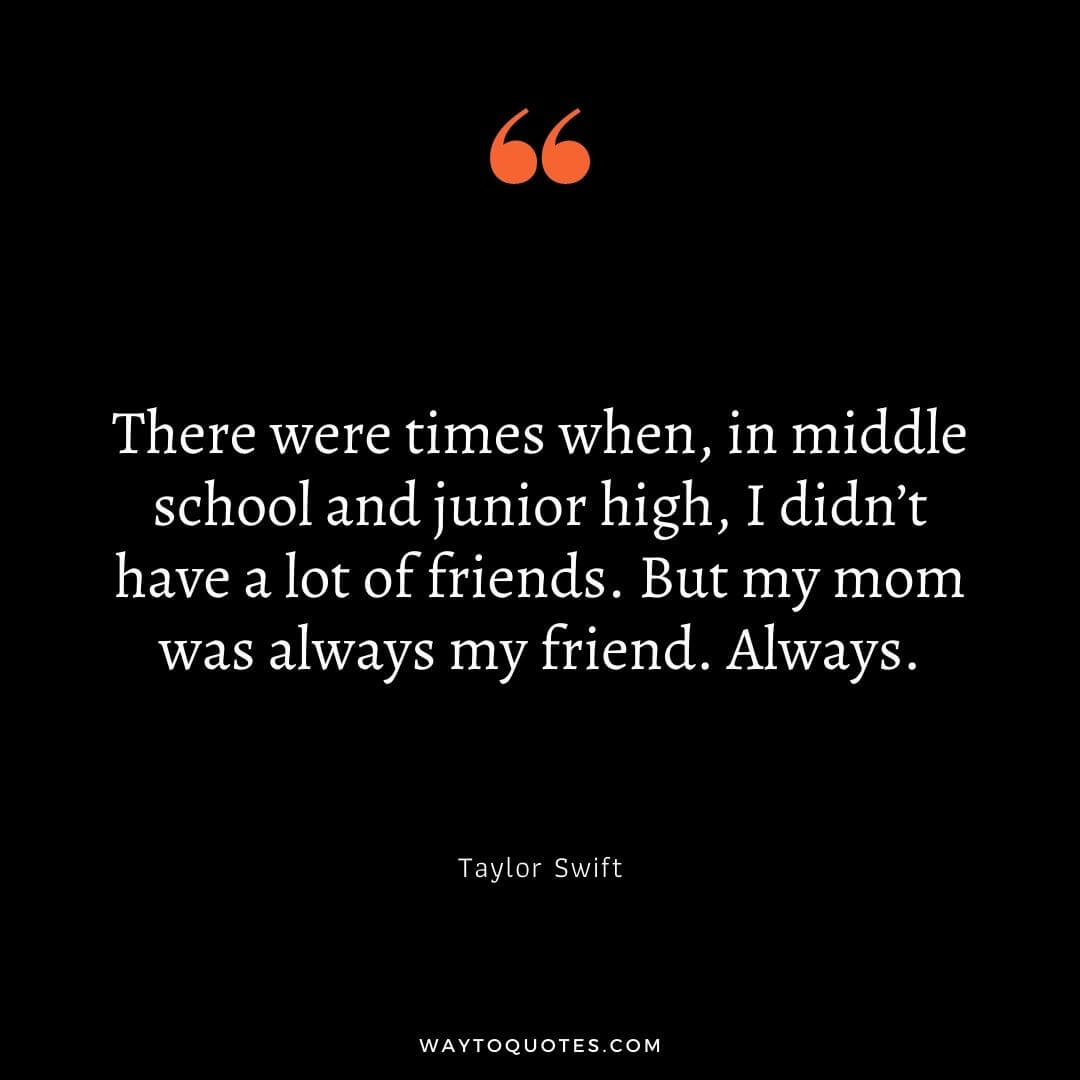 25. “I don’t think of myself as a terribly confident person. But I have a survival mechanism that was instilled in me by my mother.” -Naomi Watts

26. “There’s no such thing as a supermom. We just do the best we can.” -Sarah Michelle Gellar

27. “I have found being a mother has made me emotionally raw in many situations. You heart is beating outside your body when you have a baby.” -Kate Beckinsale

28. “It’s been a huge joy, this experience of being a mom … I don’t know how to articulate it yet, because it is so fresh.” -Claire Danes 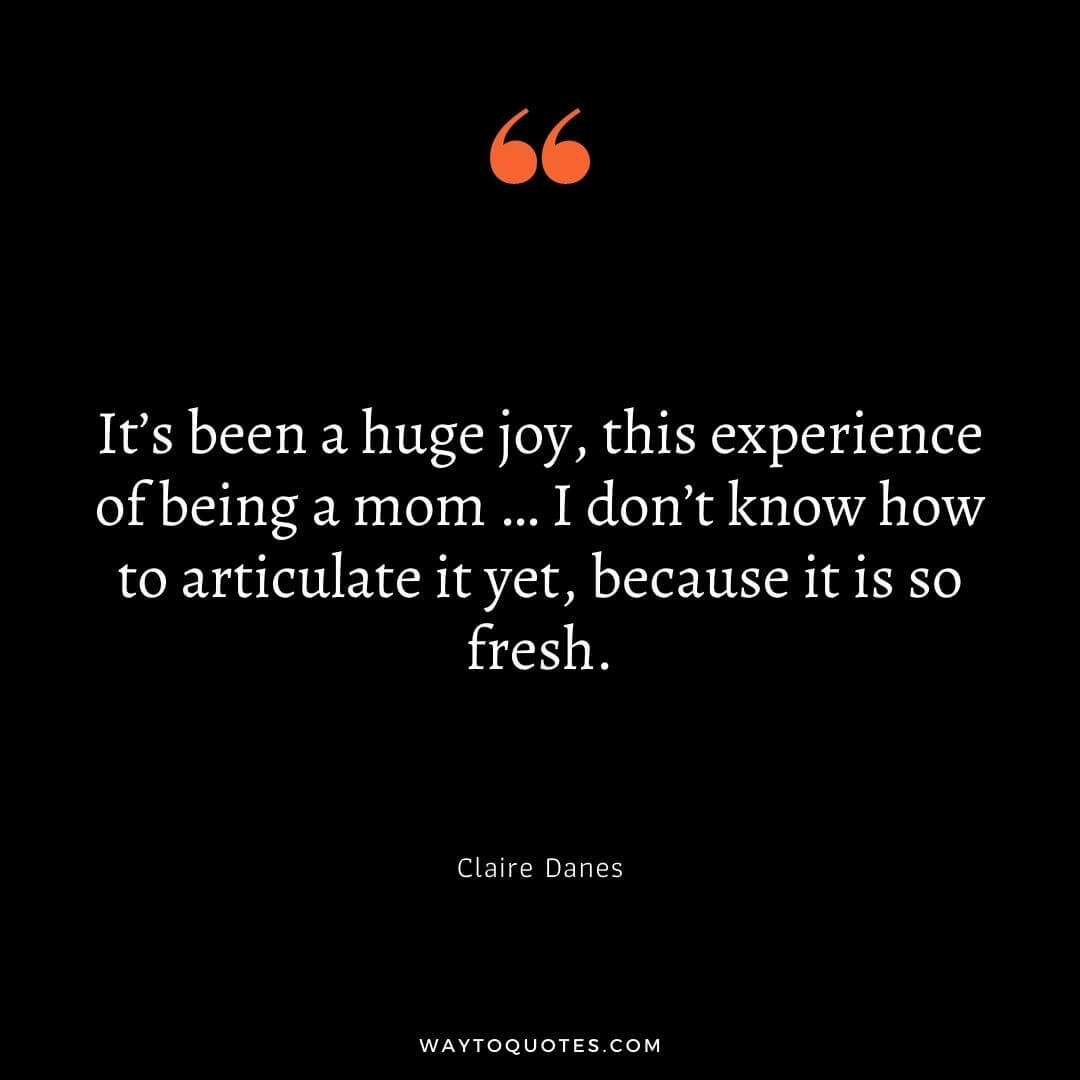 29. “A mother’s happiness is like a beacon, lighting up the future but reflected also on the past in the guise of fond memories.” -Honore de Balzac

30. “A mother is clothed with strength and dignity, laughs without fear of the future. When she speaks her words are wise and she gives instructions with kindness.” -Proverbs

31. “The influence of a mother in the lives of her children is beyond calculation.” -James E. Faust

32. “You instantly become less selfish. You can’t be the biggest person in the world anymore-they are. [Motherhood] really grounds you.” -Keri Russell 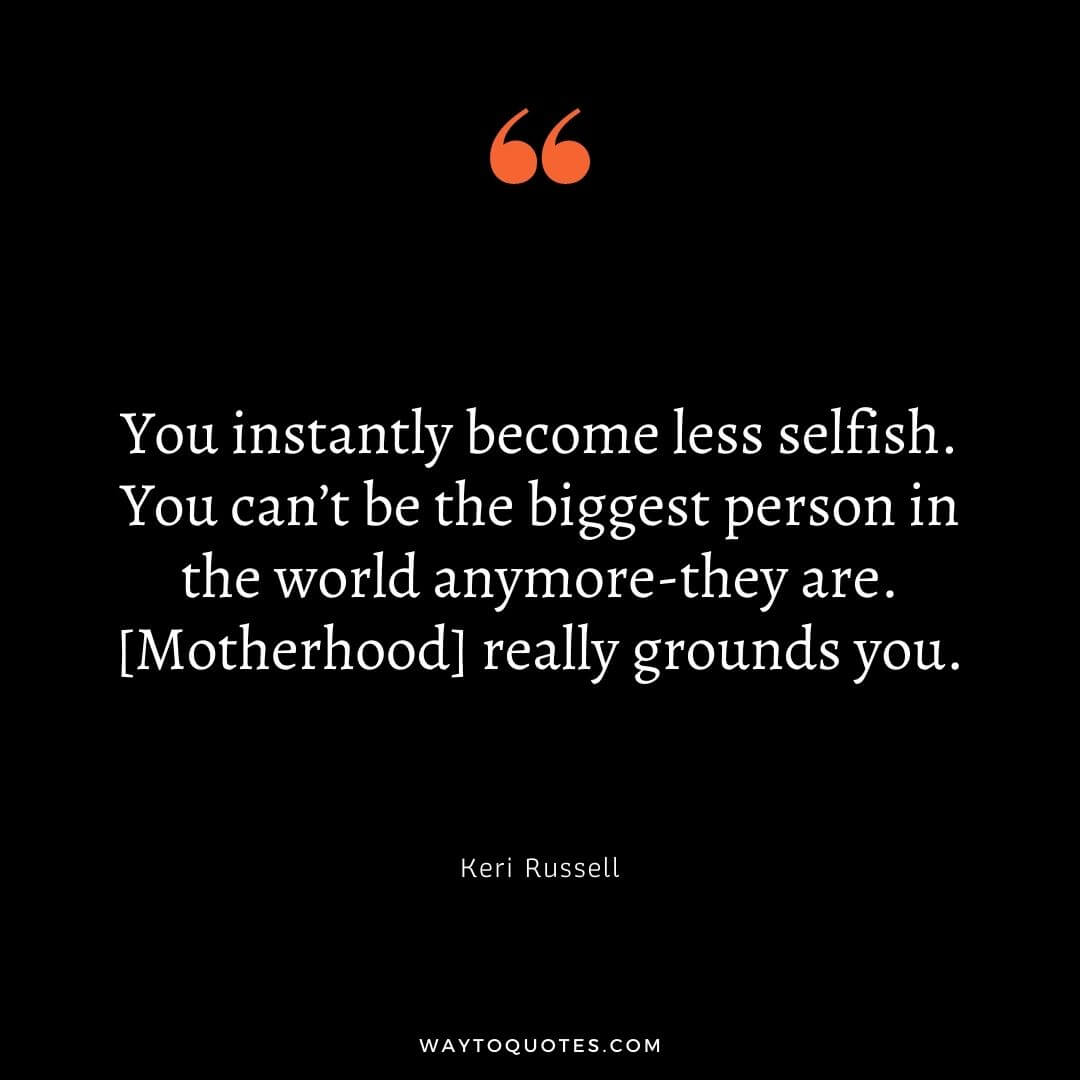 33. “The art of mothering is to teach the art of living to children.” -Elaine Heffner

34. “In the mother’s eyes, her smile, her stroking touch, the child reads the message: ‘You are there!’” -Adrienne Rich

35. “If love is as sweet as a flower, then my mother is that sweet flower of love.” -Stevie Wonder

36. “Mothers hold their children’s hands for a short while, but their hearts forever.” -Unknown 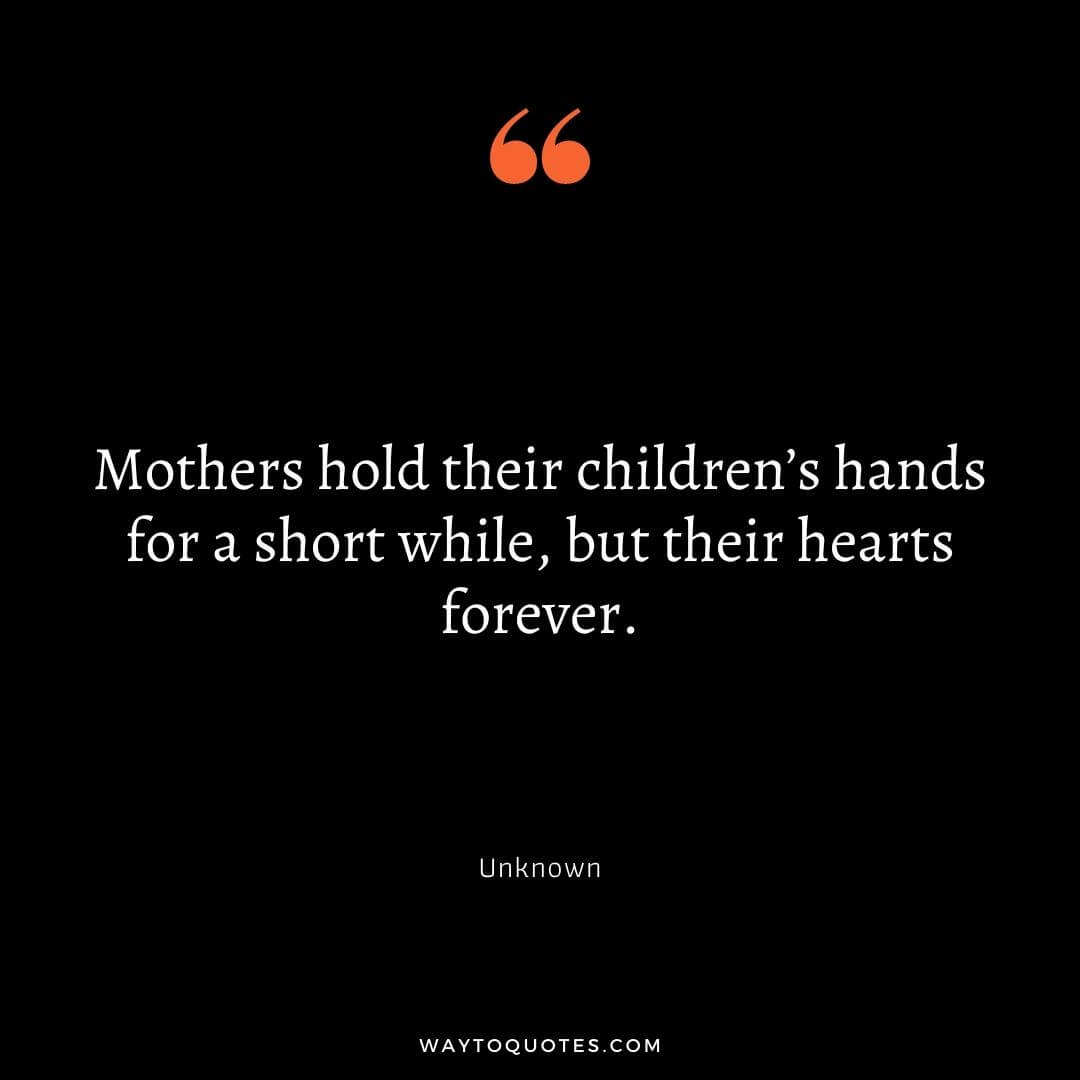 38. “Being a full-time mother is one of the highest salaried jobs since the payment is pure love.” -Mildred B. Vermont

39. “There is no way to be a perfect mother, and a million ways to be a good one.” -Jill Churchill

40. “A mother is not a person to lean on, but a person to make leaning unnecessary.” -Dorothy Canfield Fisher 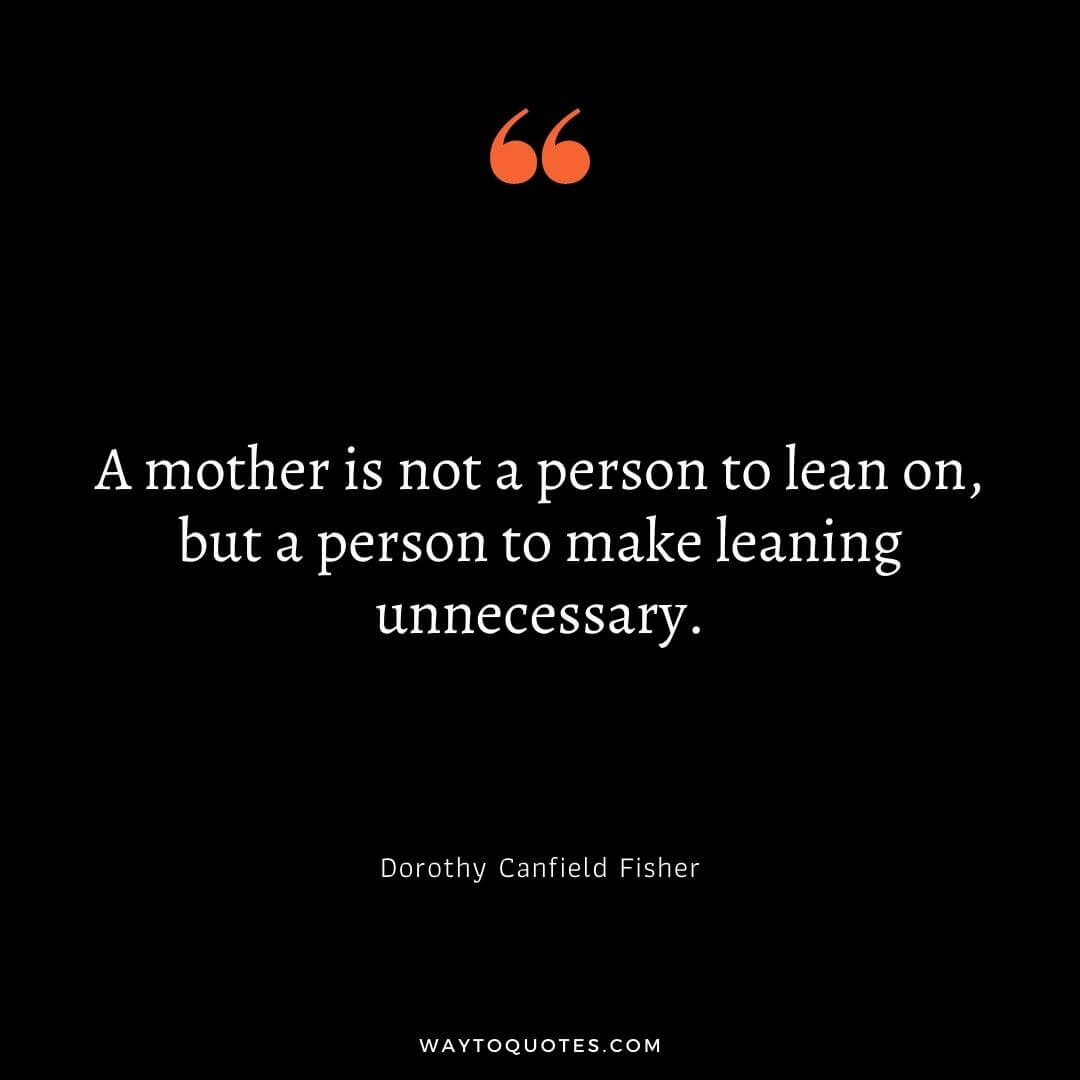 41. “Mother’s love is bliss, is peace, it need not be acquired, it need not be deserved. If it is there, it is like a blessing; if it is not there it is as if all the beauty had gone out of life.” -Erich Fromm

42. “If I have done anything in life worth attention, I feel sure that I inherited the disposition from my mother.” -Booker T. Washington

43. “There’s no way to be a perfect mother and a million ways to be a good one.” -Jill Churchill

44. “I realized when you look at your mother, you are looking at the purest love you will ever know.” -Mitch Albom 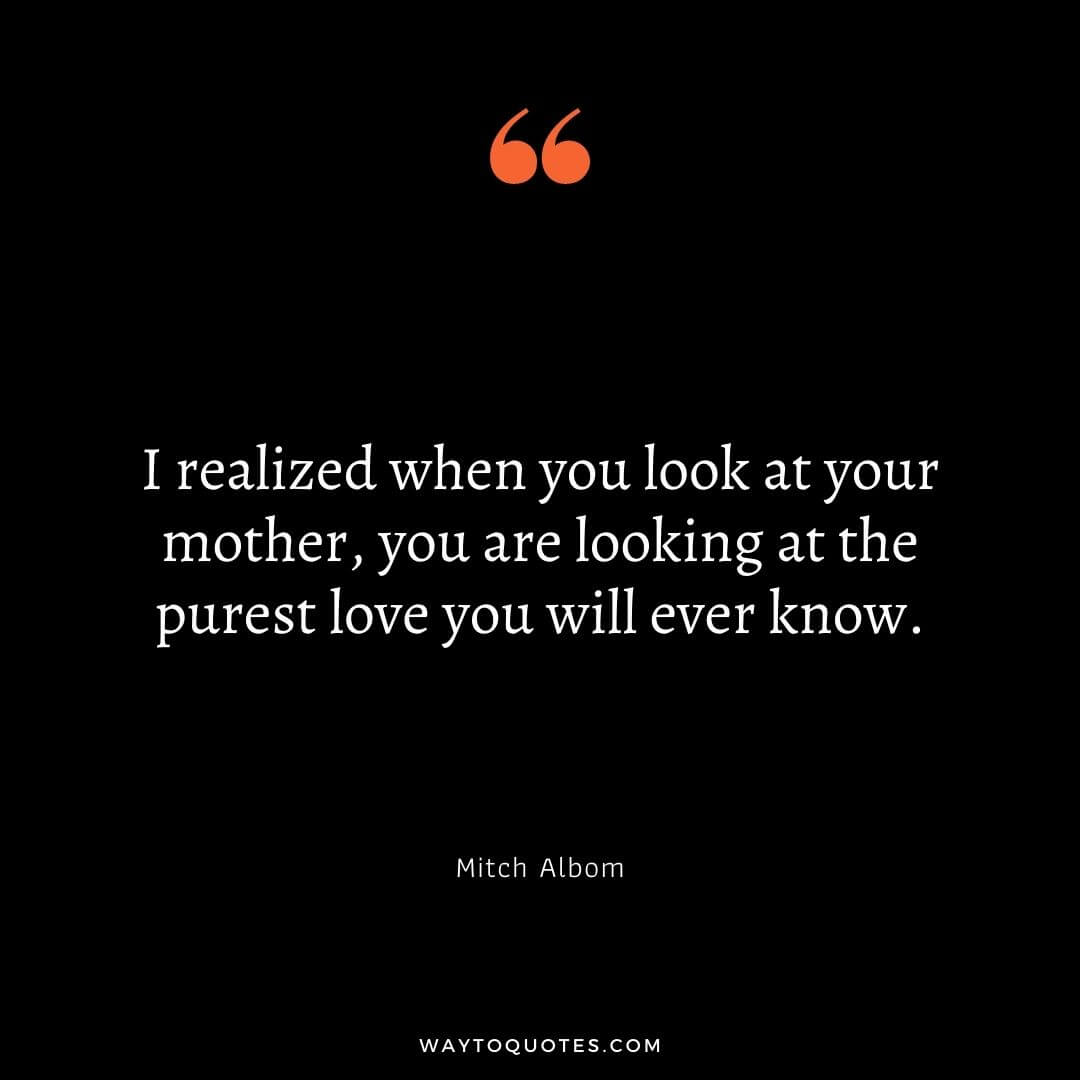 46. “Love as powerful as your mother’s for you leaves its own mark … to have been loved so deeply .. will give us some protection forever.” -J.K. Rowling

47. “I tell my kids, ‘I am thinking about you every other minute of my day.’” -Michelle Obama

48. “I’m still amazed at how my mother emerged from her lonely early life as such an affectionate and levelheaded woman.” -Hillary Clinton 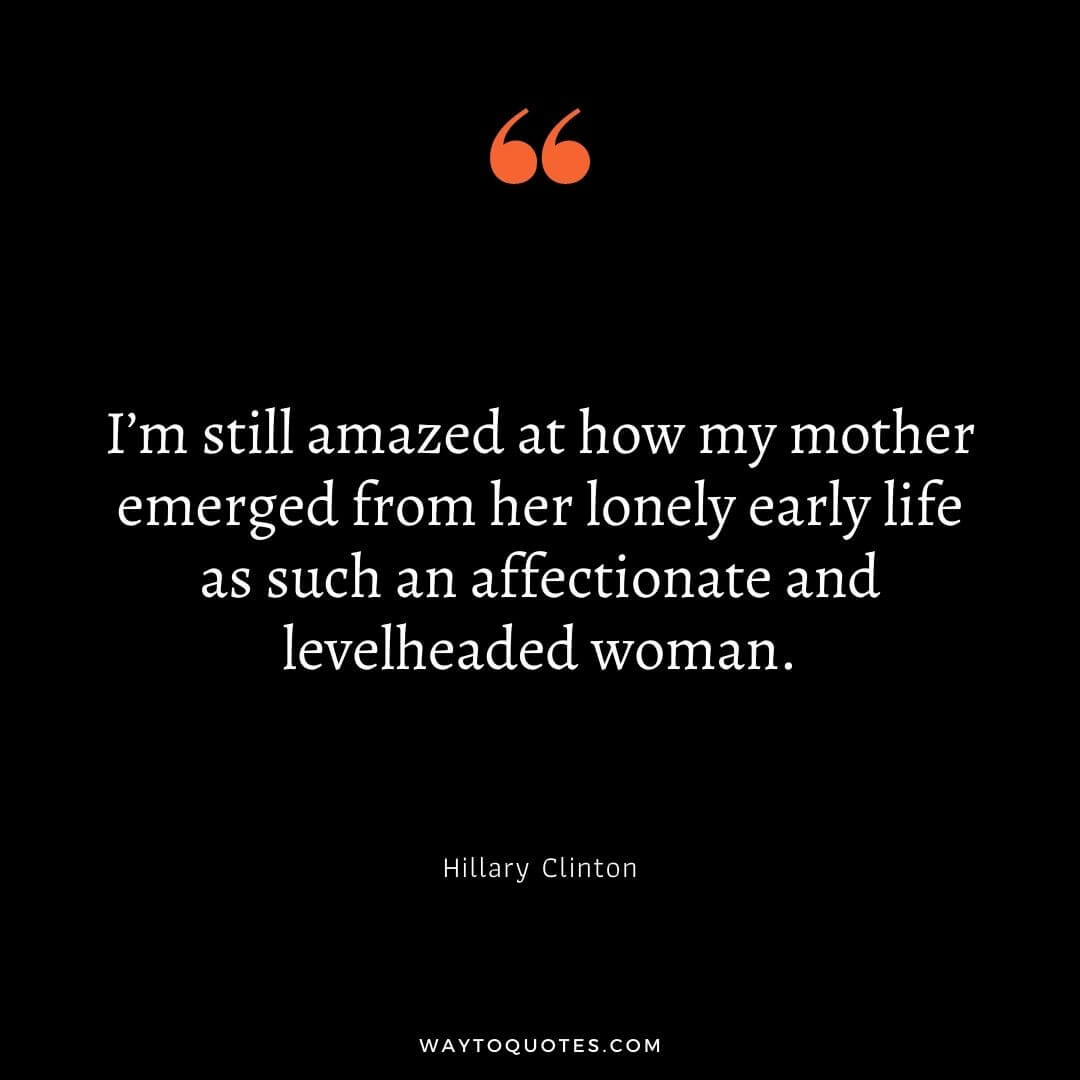 50. “A mother’s arms are made of tenderness and children sleep soundly in them.” -Victor Hugo

52. “A mother’s arms are more comforting than anyone else’s.” -Princess Diana

53. “When you are a mother, you are never really alone in your thoughts. A mother always has to think twice, once for herself and once for her child.” -Sophia Loren

54. “Biology is the least of what makes someone a mother.” -Oprah Winfrey

55. “Motherhood has a very humanizing effect. Everything gets reduced to essentials.” -Meryl Streep

56. “Mama was my greatest teacher, a teacher of compassion, love, and fearlessness. If love is sweet as a flower, then my mother is that sweet flower of love.” -Stevie Wonder 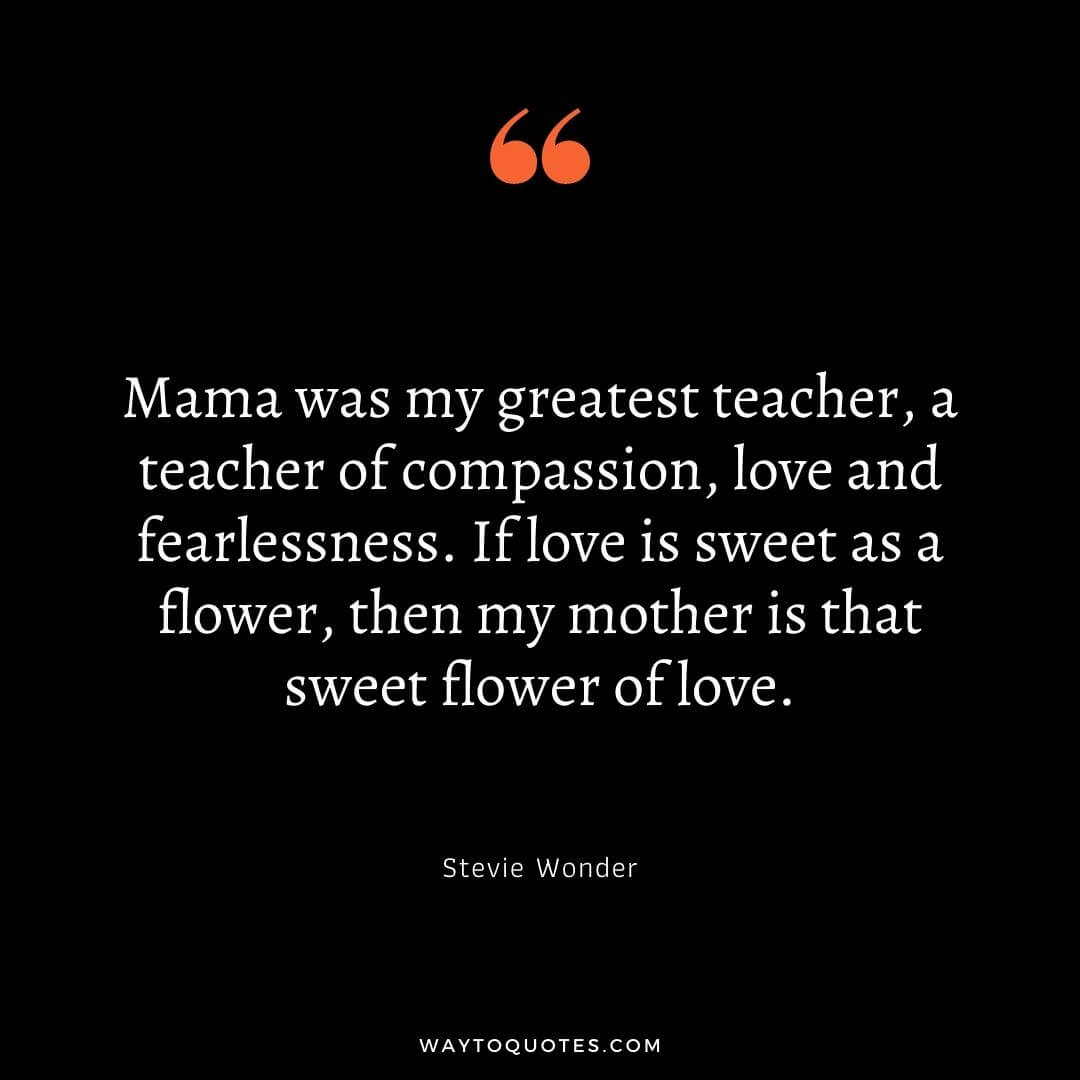 60. “Whatever else is unsure in this stinking dunghill of a world a mother’s love is not.” -James Joyce 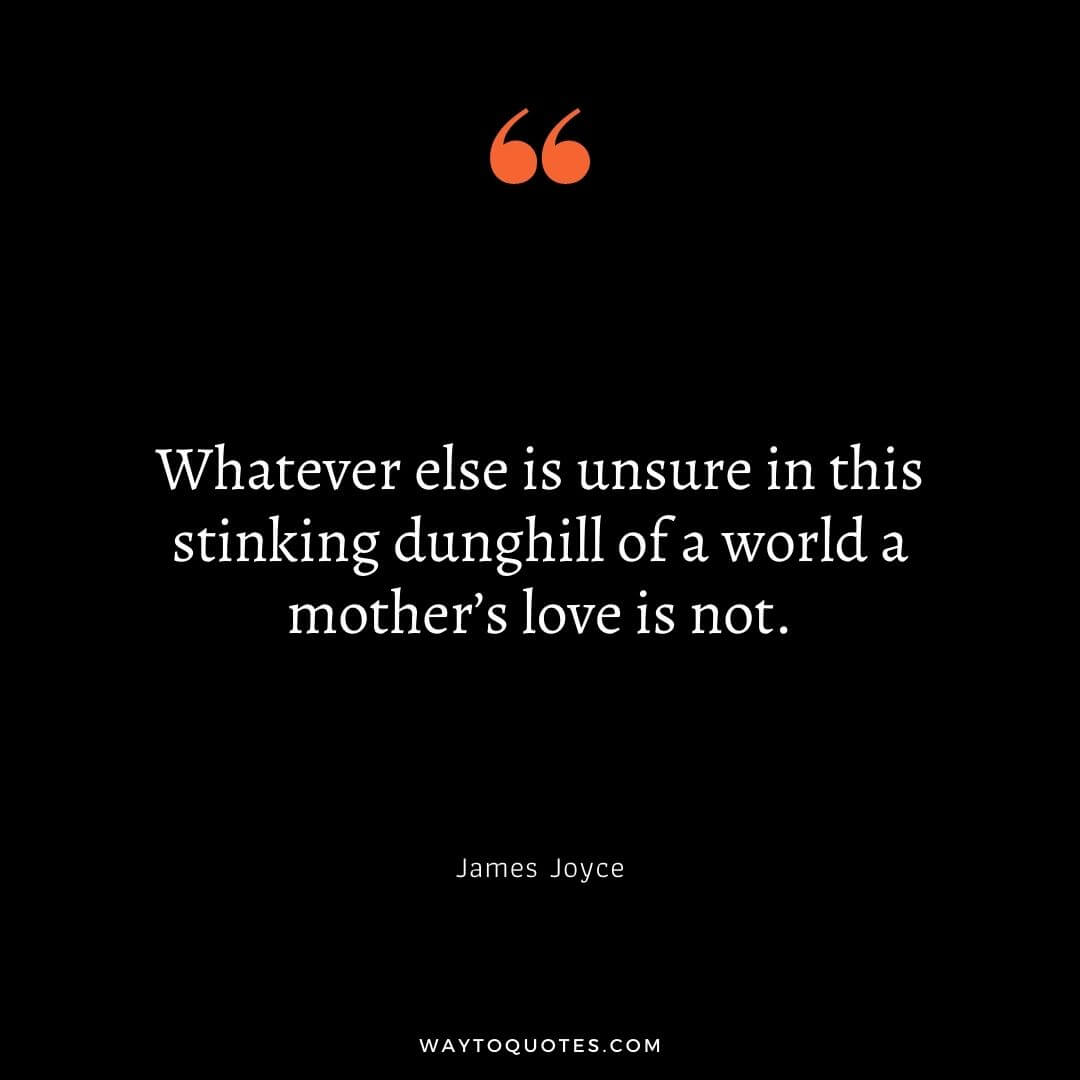 61. “My mother had a slender, small body, but a large heart-a heart so large that everybody’s joys found welcome in it, and hospitable accommodation.” -Mark Twain

63. “Motherhood: All love begins and ends there.” -Robert Browning

65. “It’s the job that I take most seriously in my life and I think it’s the hardest job.” -Debra Messing

66. “Being a mother is learning about strengths you didn’t know you had.” -Linda Wooten

67. “Mothers possess a power beyond that of a king on his throne.” -Mabel Hale

68. “No language can express the power and beauty and heroism of a mother’s love.” -Edwin Chapin 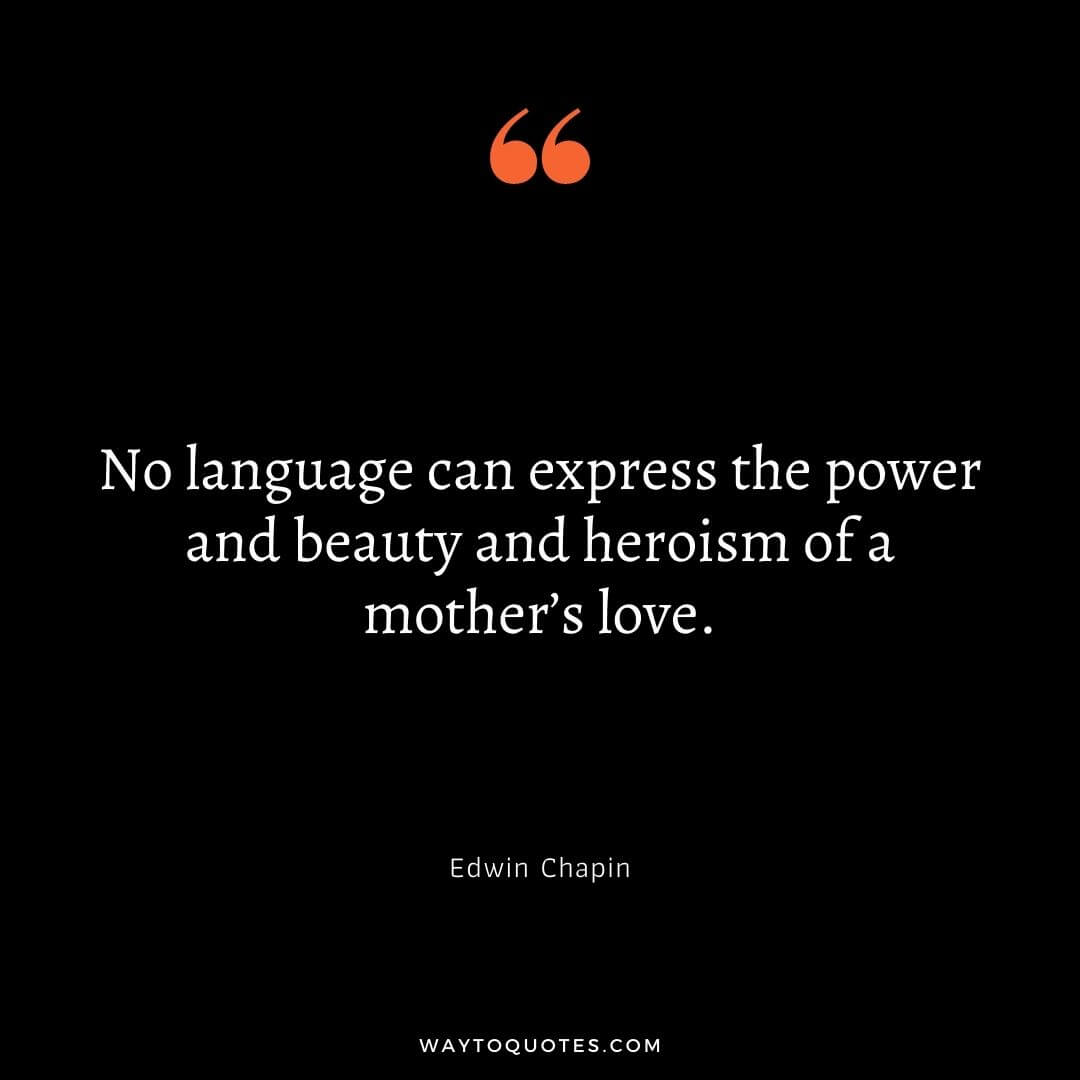 69. “Mothers can look through a child’s eyes and see tomorrow.” -Reed Markham

70. “Mother-that was the bank where we deposited all our hurts and worries.” -T. Dewitt Talmage

71. “My mother is my root, my foundation. She planted the seed that I base my life on, and that is the belief that the ability to achieve starts in your mind.” -Michael Jordan

72. “A mother is a mother still, the holiest thing alive.” -Samuel Taylor Coleridge 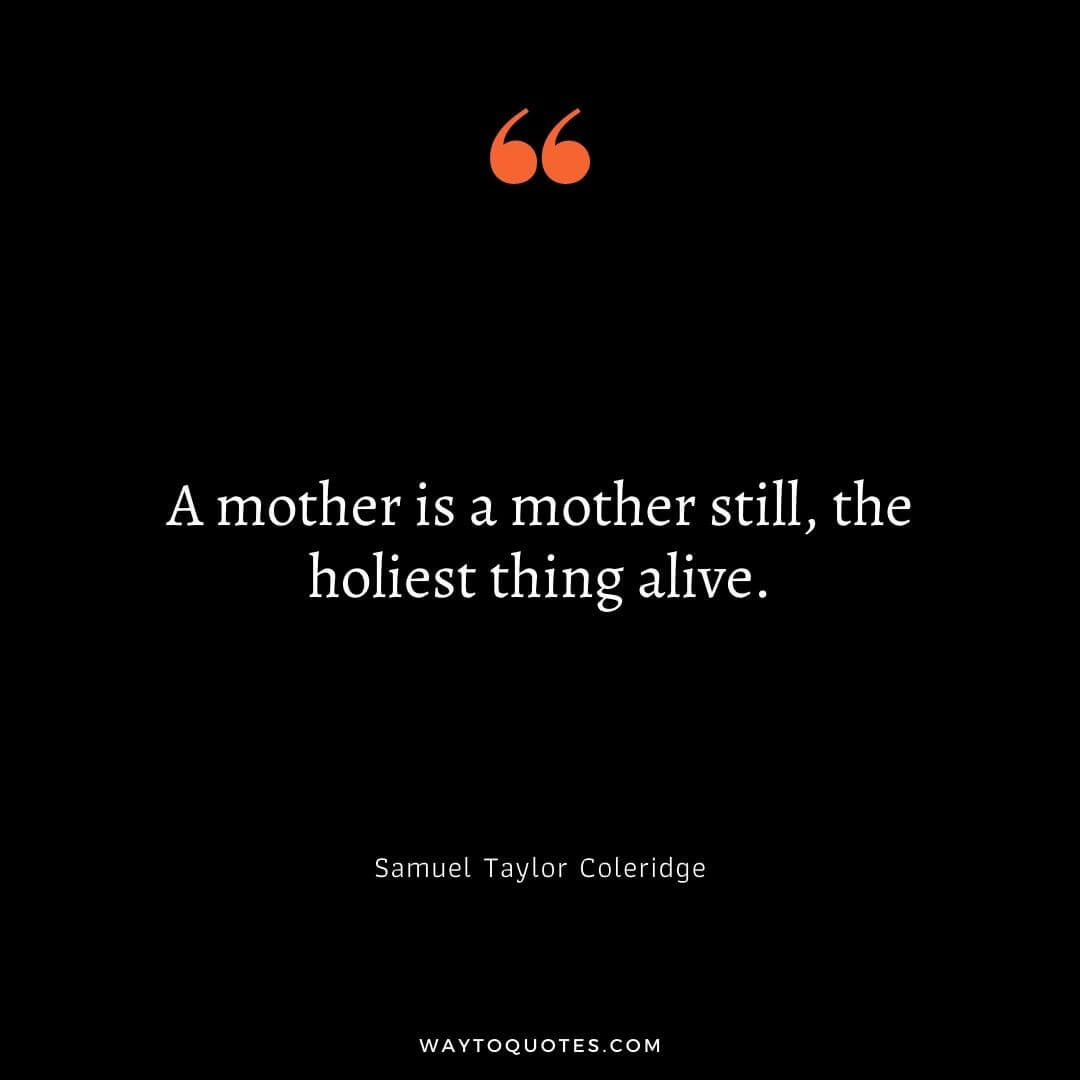 73. “I can imagine no heroism greater than motherhood.” -Lance Conrad

74. “Of all the rights of women, the greatest is to be a mother.” -Lin Yutang

75. “Mother love is the fuel that enables a normal human being to do the impossible.” -Marion C. Garretty

76. “Acceptance, tolerance, bravery, compassion. These are the things my mom taught me.” -Lady Gaga 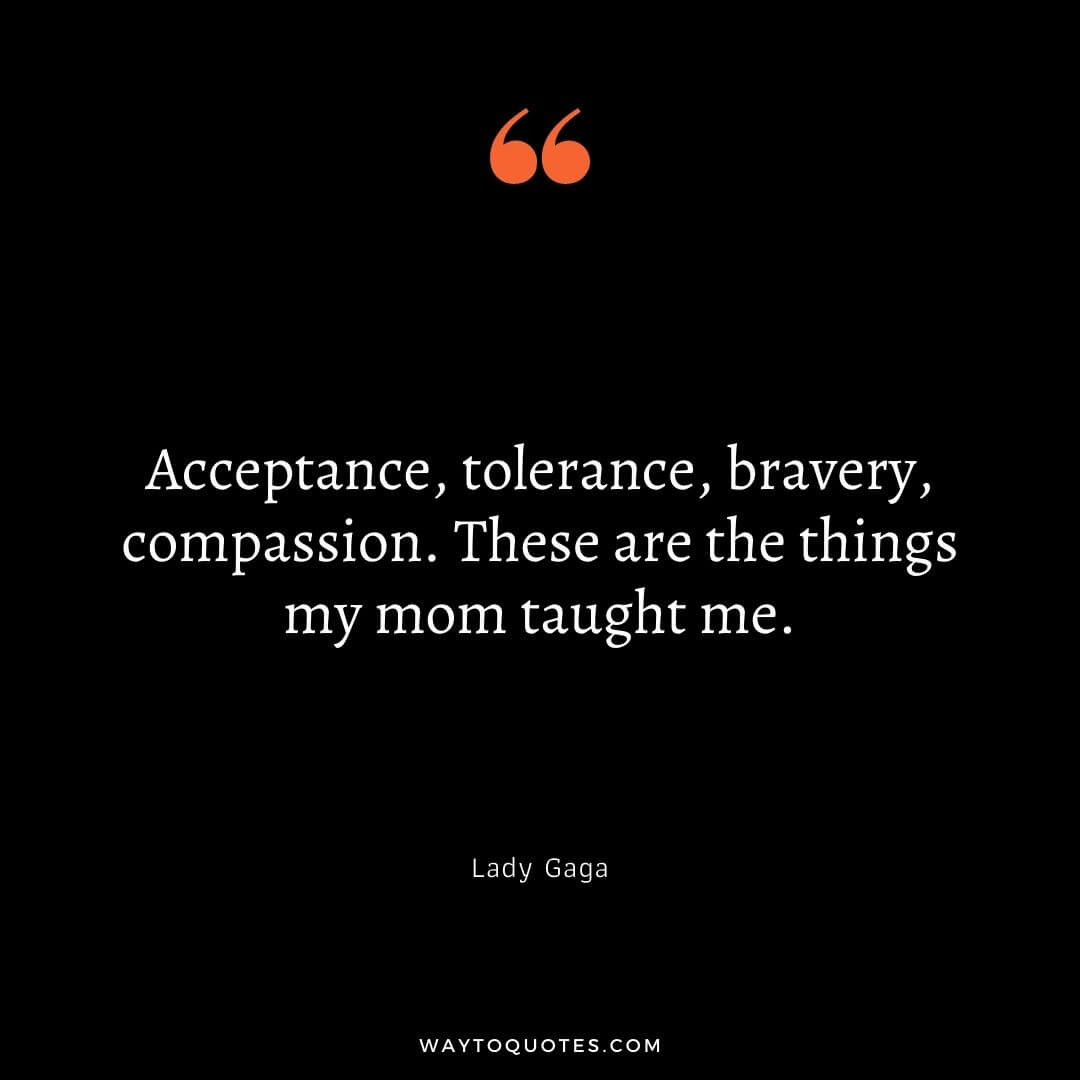 78. “The mother’s heart is the child’s school-room.” -Henry Ward Beecher

81. “There is no influence so powerful as that of the mother.” -Sara Josepha Hale 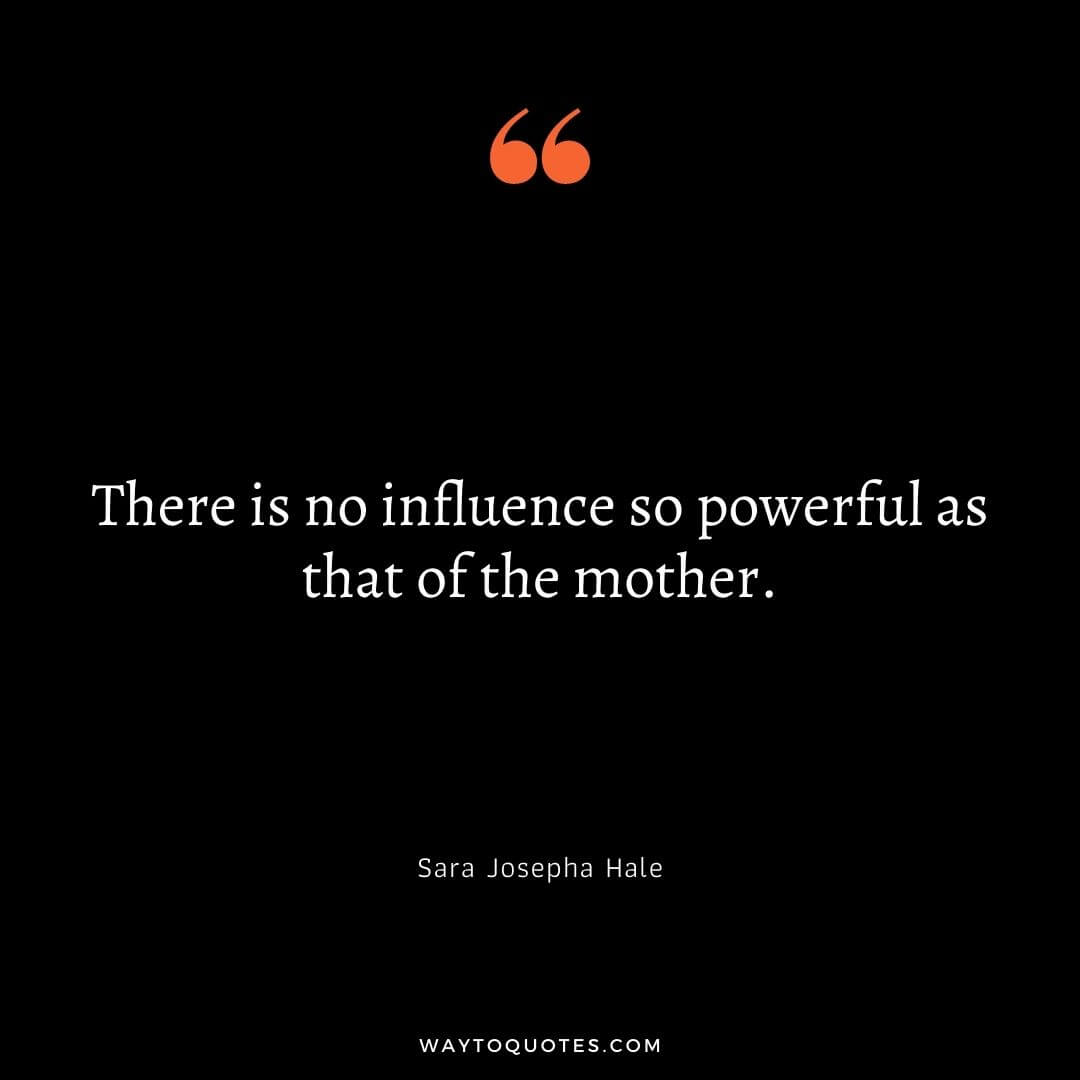 82. “A mother’s arms are more comforting than anyone else’s.” -Princess Diana

84. “A mother is the one who fills your heart in the first place.” -Amy Tan

85. “Mother is one to whom you hurry when you are troubled.” -Emily Dickinson 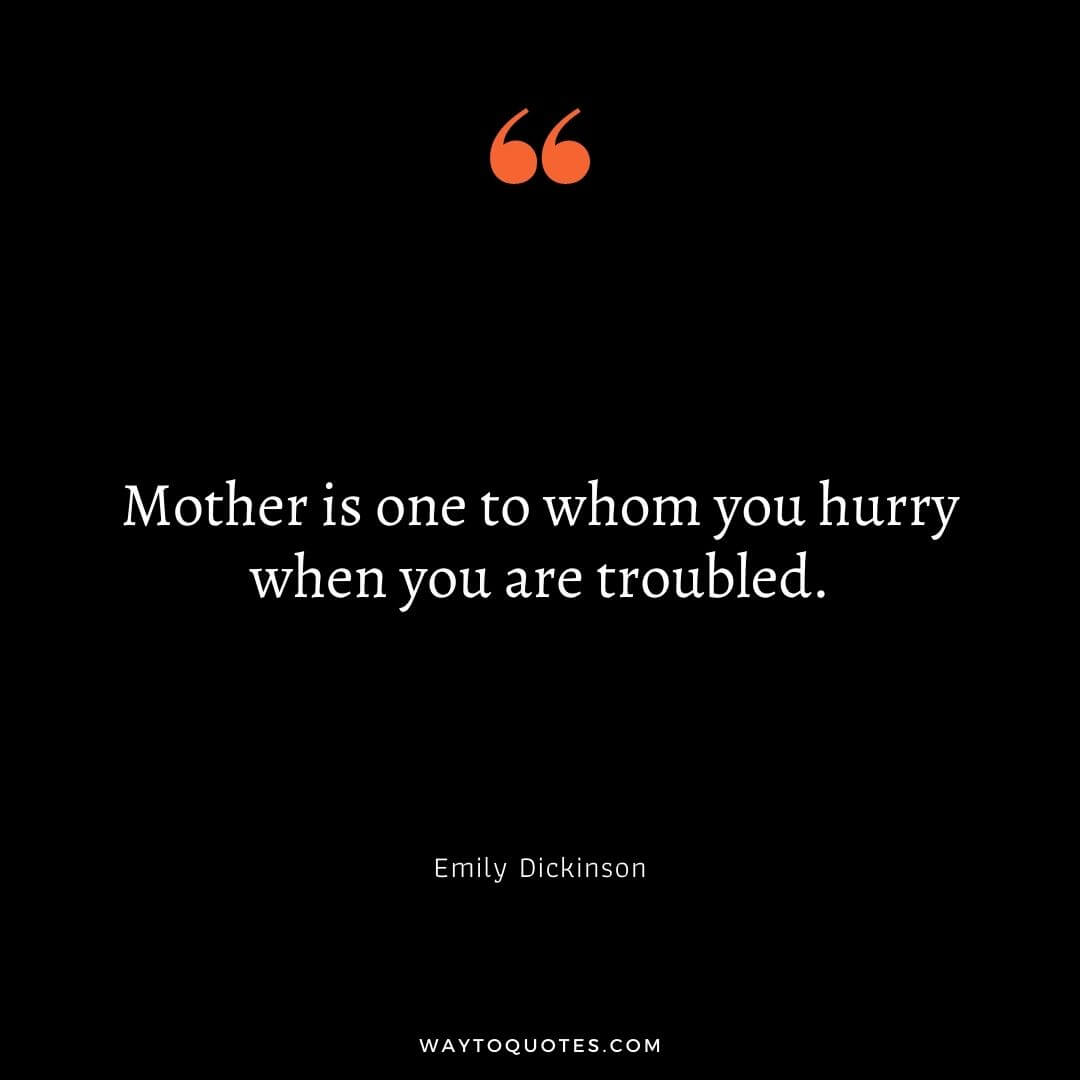 86. “A mother’s love is more beautiful than any fresh flower.” -Debasish Mridha

87. “My mother is a walking miracle.” -Leonardo DiCaprio

88. “A mother understands what a child does not say.” -Jewish proverb 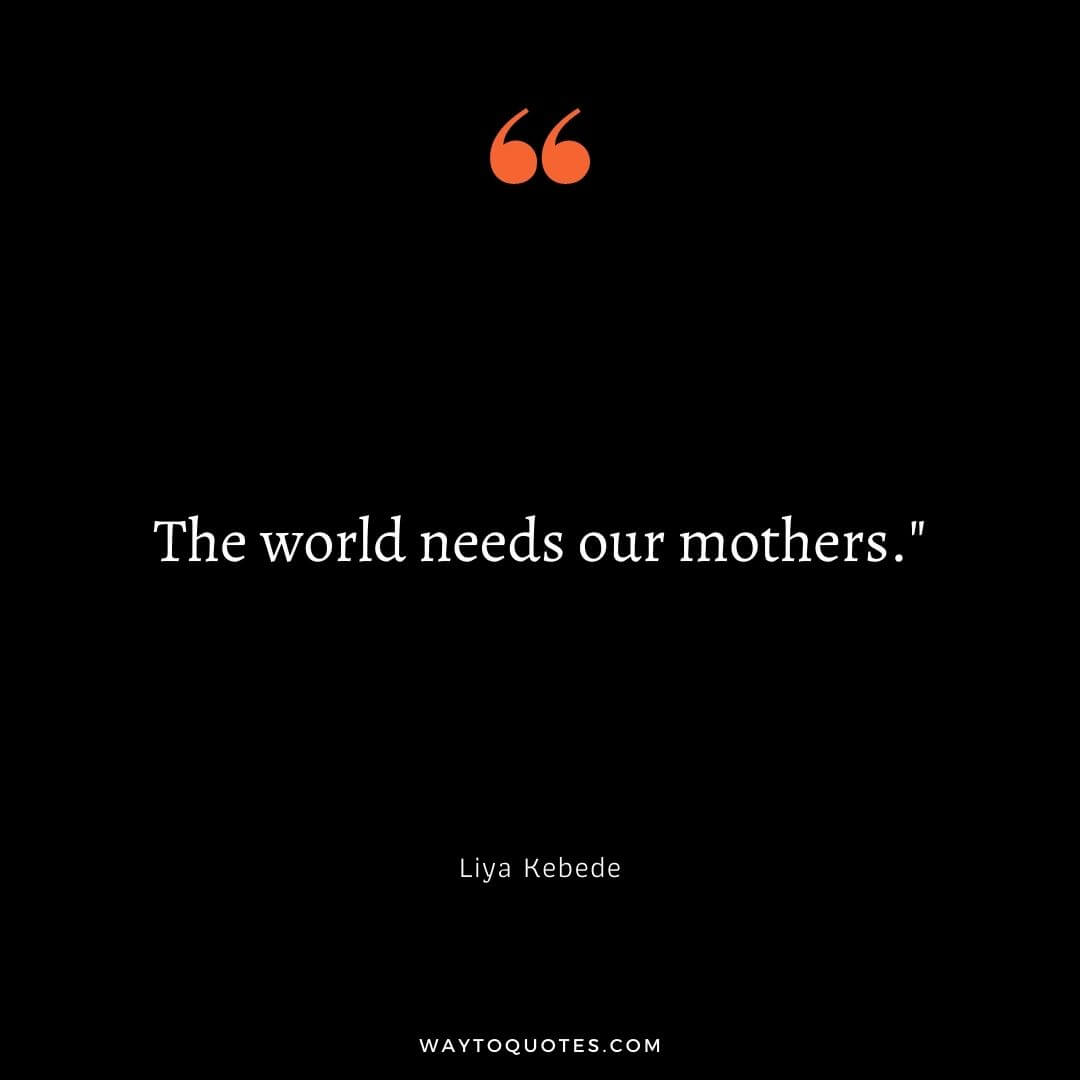 91. “There is nothing as sincere as a mother’s kiss.” -Saleem Sharma

92. “Life began with waking up and loving my mother’s face.” -George Eliot

93. “A mother is always the beginning. She is how things begin.” -Unknown

95. “Mother: the most beautiful word on the lips of mankind.” -Kahil Gibran

97. “I want my children to have all the things I couldn’t afford. Then, I want to move in with them.” -Phyllis Diller 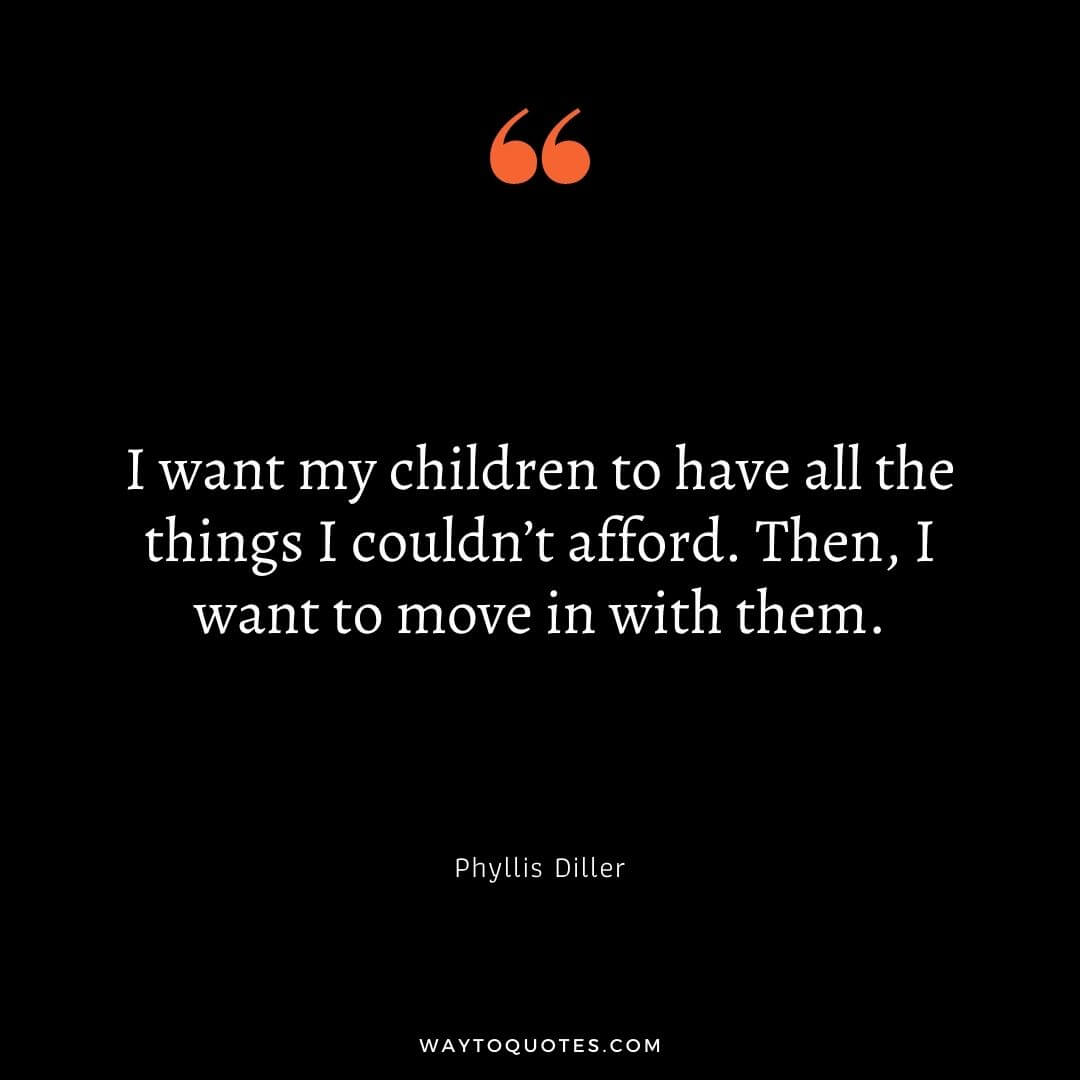 98. “Any mother could do the jobs of several air traffic controllers with ease” -Lisa Alther

99. “If evolution really works, how come mothers have only two hands?” -Milton Berle

100. “There is only one pretty child in the world, and every mother has it.” -Chinese Proverb

101. “Mom, I love you, even though I’ll never accept your friend request.” -Unknown

102. “We have a secret in our culture, and it’s not that birth is painful. It’s that women are strong.” -Laura Stavoe Harm

103. “An ounce of mother is worth a ton of priest.” -Spanish Proverb

104. “A mom forgives us all our faults, not to mention one or two we don’t even have.” -Robert Brault

105. “In the end, mothers are always right. No one else tells the truth.” -Randy Susan Meyers 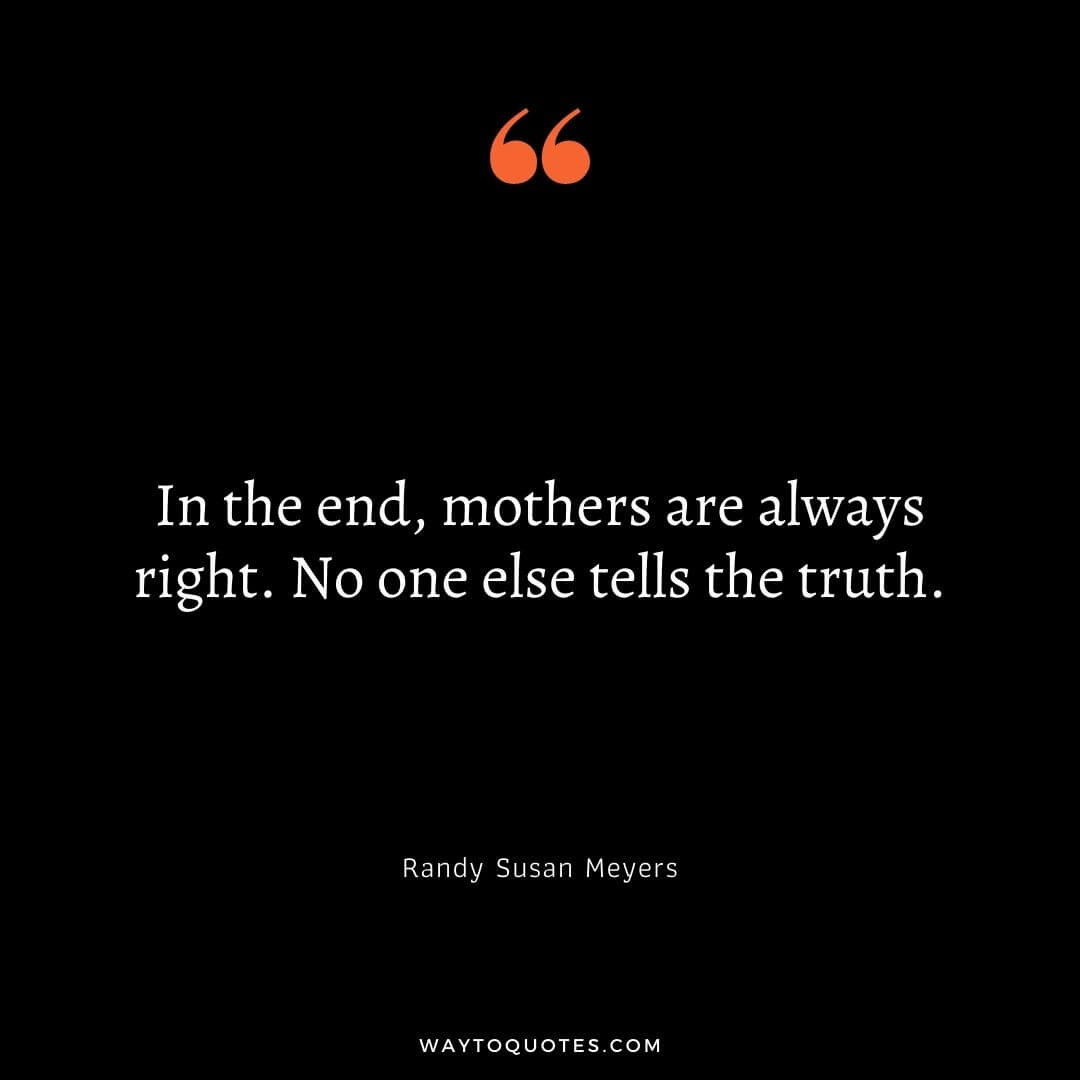 106. “God could not be everywhere, and therefore he made mothers.” -Rudyard Kipling

108. “When your mother asks, ‘Do you want a piece of advice?’ it’s a mere formality. It doesn’t matter if you answer yes or no. You’re going to get it anyway.” -Erma Bombeck 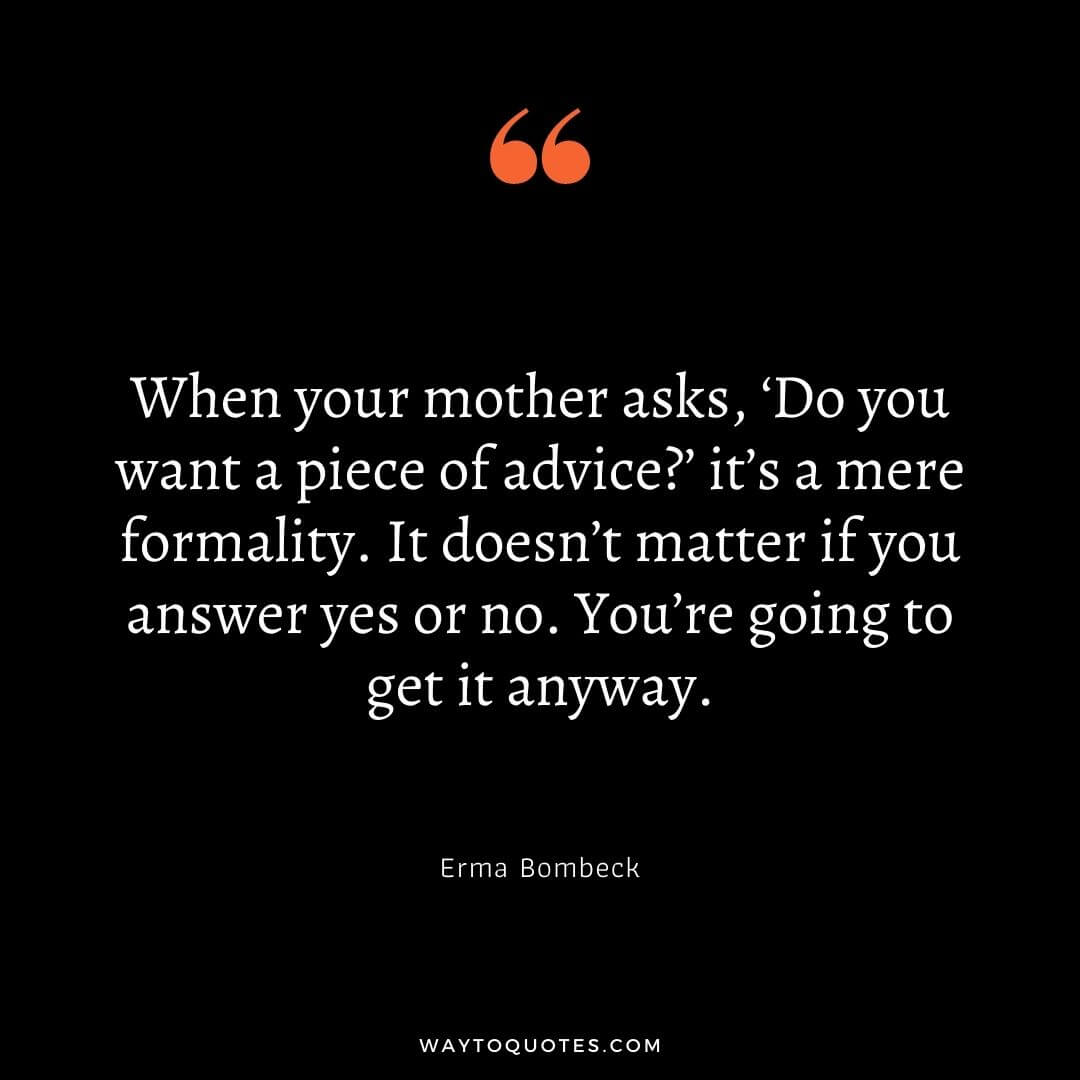 109. “Any mother could perform the jobs of several air-traffic controllers with ease.” -Lisa Alther

110. “A mother is a person who, seeing there are only four pieces of pie for five people, promptly announces she never did care for pie.” -Tenneva Jordan

A mother gives birth to new life on earth. But then there are people who might not have given birth but they love and care like a mother. And we are here to thank them all, who nourish and who nurture everyone and everything around them. The earth is a better place because of them. So thanks to all the mothers and nurturers out there.

200 Motivational Quotes To Inspire You To Be Successful

100 Liar Quotes That Shows The Power Of Truth

85 Motivational Monday Quotes To Get You Through The Week